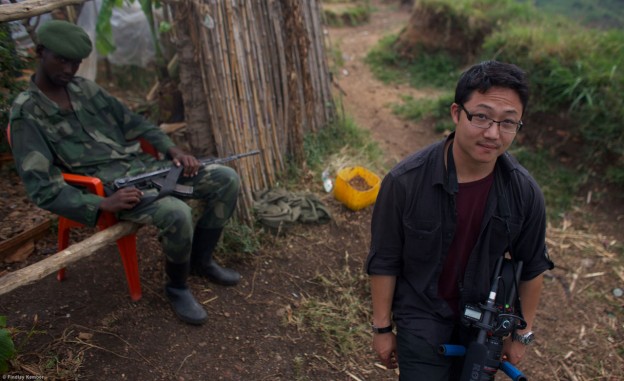 There was a time when some of us taught journalism classes in a single medium. In a print-based class, we taught writing. We read newspapers and books, and students reported and wrote and wrote. Today, as we all know, that’s not enough. So how do we introduce visuals into a print-based class? At a small private liberal arts school with a tiny academic journalism minor? And no equipment?

We teach videography on a smartphone.

“I was floored, honestly.” - Mike Shum

Documentary filmmaker Mike Shum came to my “Journalism and the Public Sphere” class at Colorado College, where students take one course at a time in 3½ weeks, to show them how to make good videos on a smartphone. The sophomore-level class of 11 students involved many assignments in the community, and I thought a visual storytelling tool would help students engage with the city around them as they went out to report stories. We had extra phones if someone lacked a smartphone, but the backups weren’t needed.

The idea for Shum’s visit came to me during a brilliant smartphone-video workshop by Val Hoeppner at NewsTrain, an Associated Press Media Editors traveling workshop.

Shum — a 2007 Colorado College graduate who ordinarily reports from conflict zones and has freelanced for The Economist, The New York Times, USA Today and France 24, among others –spent a morning showing students how to shoot on their phones and then edit with Splice, a free app. Wielding his own iPhone, he explained what he looks for and how he thinks about stories when he uses his own professional filmmaking equipment, a point of view that made sense to students as they manipulated their much simpler devices.

After the three-hour in-class workshop, we sent the students out on campus in teams to find stories. The following morning, they presented their videos – one on cafeteria workers, another on ballet dancers and a third on food — and Shum helped them edit.

“I was floored, honestly,” with the quality of the videos, Shum said. The free app wasn’t perfect – the sound editing was a little wonky – but the exercise was an experiment that worked, as it offered tips and practice in visual storytelling and feedback from an expert.

Most of the students went on to make other smartphone videos that they embedded in Storify for the final class assignment, a multimedia project based on reporting a story on a city issue.  Example: To illustrate a form of public participation, a team of students explored a smartphone app people can download from the city of Colorado Springs website to photograph problems they find in the city. The students videotaped a student using the app to document graffiti and a large pothole. They returning the next day to find the graffiti painted over but the pothole still gaping.

Other students used their new skills to record interviews and show examples in their stories.  They reported on a failing, hugely expensive storm-drainage system – crucial in our fire-ravaged landscape where water runoff has turned deadly on city streets — and on an initiative to build major tourist attractions to boost the local economy, among other topics.

The downside of the smartphone-video experiment: It was a taste, and only a taste, of the possibilities of visual journalism. At best, it added another dimension to the idea of “show, don’t tell.” On the upside, the videos helped some students make the best use of Storify, bringing home the idea of combining different media in one story. For most of the students, Storify was simple to use and great fun. For a few, print was the medium in which they felt the most comfortable though they appreciated what they could do with a smartphone. The course remained print-based, emphasizing critical thinking, reporting, document scrutiny and interviewing – with a door cracked open to the wider world of visual storytelling.

Shum also talked about his reporting in the Congo and other danger spots, prompting enthusiastic discussion about the role of news in public life, a theme of the class.

Colorado College, a small, private liberal arts college, is on the block plan, in which students take one course at a time, each for 3 1/2 weeks. They meet every morning, usually from 9 a.m. to noon, which allows for good, hands-on work a visitor can bring to the class.

Shum’s Tips for Shooting Video on a Smartphone

Keep the phone still or steady while filming. Your film is arguably more compelling when the audience’s focus is on your subject and not on the movement of the camera.

When filming your story, collect a variety of different shots of your subject. Film wide, medium and close-up shots to give you enough options to make a fuller story.

Think of your shots and the story you’re filming in terms of beginnings, middles and ends. If you give yourself enough of these during filming, it’ll make it easier for you to craft your story while editing.

The size of the phone can be a  strong benefit, so use this strength when collecting video. Instead of always holding the phone at eye line, challenge your boundaries and put the camera in different places, from different angles, to give yourself interesting shots.

When it comes to a major news event, make sure you film as much of the event as possible from a safe distance and as still as possible. News editors are willing to work with the footage as long as the content is composed clearly and completely.

Diane Alters is a lecturer in journalism at Colorado College, where she is also the academic specialist in Communications. She has been a reporter or editor at several newspapers, including The Boston Globe and The Denver Post. She has an undergraduate degree from Grinnell College, a doctorate from the University of Colorado at Boulder, and is co-author of Media, Home, and Family (Routledge 2003.) [email protected]; @DianeAlters