Knight Fellowship Winners at Stanford Look to the Future of News 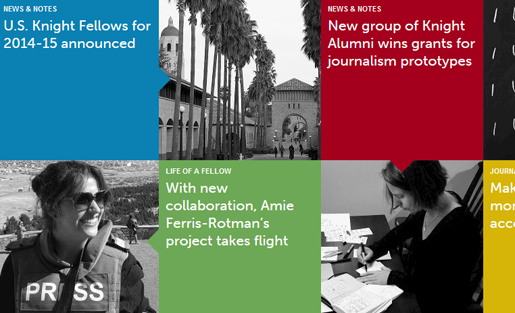 Each year, 20 people from around the world get the resources to pursue their ideas for improving journalism.

Following on the heels of last week’s announcement of eight new international fellows, the Knight Fellowships program at Stanford has revealed the 12 winners of the John S. Knight Journalism Fellowships for the 2014-15 academic year.

The program is an attempt to help decipher the future of news — and as you can see from the innovators who were selected this time around, those who are selected to participate bring a bevy of digital skills and forward-thinking ideas to the mix. Read more below on how they plan to work to reshape news while participating in the program.

A number of former Knight fellows have gone on to create projects that have won grants from the Knight News Challenge. You can read about their projects here on Idea Lab. We also at times feature posts written by current Knight Fellows and originally posted to the blog for the Knight Fellowships at Stanford. You can read more of those here.