The Future of Media Is Attention-Driven and Bright 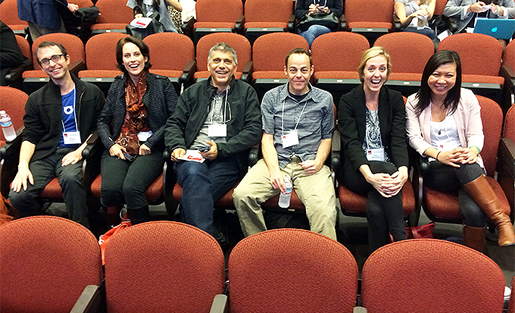 Several Knight Fellows attended the recent Future of Media Conference in Palo Alto, Calif., where insights ranged from the rise of publishing “platforms” to the future of TV.

The conference, organized by the Stanford Graduate School of Business, featured keynote speeches by Chas Edwards, the co-founder and publisher of California Sunday (which makes Pop-Up Magazine and The California Sunday Magazine), and Todd Yellin, the vice president of product innovation at Netflix.

Edwards kicked off the conference by raising a fundamental question: What makes us pay attention?

“In media, it’s attention we’re selling,” Edwards said. Yet while the average print reader will spend 25 minutes with a newspaper, the average digital reader spends just 70 seconds on a site — what Edwards calls “the sad stat.”

But it’s not all doom and gloom. Digital media consumers do spend lots of time with certain things — Snapchat, for instance, or the Netflix series “House of Cards.” Edwards offered three pieces of advice for media companies seeking a piece of the digital attention pie:

After Edwards spoke, attendees broke off to attend various panels, including “What’s New in the News Business,” “The Future of Television,” and “Media in a Mobile-First World.” Post-lunch panels included “Tomorrow’s Gaming Landscape,” “Investing in New Media,” and “Publishing Platforms in a Post-Blog World.”

Yellin delivered the final keynote, a discussion about Netflix and “the future of TV.” For detailed coverage of each session, check out the Storify below.

[View the story “#FOMC14: The Future of Media Conference” on Storify]

At the tender age of 7, Alexa Schirtzinger wrote her autobiography, threw up all over it during a long car ride, decided she hadn’t lived enough anyway, and hasn’t looked back. A former Peace Corps volunteer and whitewater rafting guide, she found her calling as an alt-weekly journalist and, most recently, as editor-in-chief of the feisty, fearless, unapologetic Santa Fe Reporter. Not one to set goals that might be too easily achieved, she now intends to build on the alt-weekly model to identify revenue solutions for local journalism — admittedly, in other words, “save” journalism.