Mediatwits #114: Will Robots Take Over Simple Tasks for Journalists? 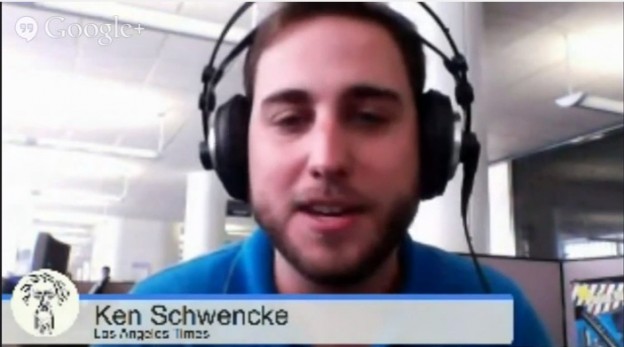 Ken Schwencke of the Los Angeles Times joined the podcast to discuss his algorithm-generated post about an L.A. earthquake.

This week, when a 4.4-magnitude earthquake hit L.A., the L.A. Times’ Ken Schwencke was the first to break the story. But, the actual author of the post wasn’t Schwencke — it was Quakebot, an algorithm he created about two years ago. The article was no masterpiece, but it clearly conveyed the essential information such as the quake’s magnitude and epicenter via the USGS Earthquake Notification Service. Schwecke’s robo-reporter isn’t the only one of its kind, either: just this weekend, the Guardian wrote a post about its own GUARBOT, which was programmer Will Franklin’s attempt to make a robot that could create news pieces with analysis. The article GUARBOT wrote began with, “The crime-ridden family of quinoa…” and didn’t get much better from there. What role do computers have in the future of journalism? Will we see more Quakebots, or even a smarter GUARBOT? This week, we’re joined by Ken Schwencke of the Los Angeles Times and Christer Clerwall, assistant professor at Karlstad University. We’ll also be joined by Andrew Lih of American University, Elise Hu of NPR, and MediaShift’s Mark Glaser will host.

Ken Schwencke has worked as a data­base pro­du­cer at The Los Angeles Times since 2009. He de­vel­ops news ap­plic­a­tions for latimes.com and con­ducts ana­lys­is for re­port­ing pro­jects. You can follow him on Twitter @schwanksta.

Christer Clerwall is an assistant professor in Media and Communication Studies at Karlstad University, Sweden. His research focus is on online and digital journalism, and he is currently working on a project about algorithmic, or “robot,” journalism, and a project on transparency and trustworthiness in journalism.

A recent, preliminary report by Professor Christer Clerwall indicates that the quality of robot-produced reports might not be detectably worse than those written by flesh-and-bones journalists. In the study, which compared short sports reports written by L.A. Times reporters and software-generated reports, the robotic stories received high scores for being “descriptive,” “trustworthy” and “objective.” The only statistically significant difference between the types of reports was that the human-generated article was more pleasant to read. But this study and the Quakebot do not necessarily mean every journalist should scramble to learn how to create a writing robot. These reports are short and information heavy, which do not account for the analysis-rich or anecdotal reporting that captures readers’ interests or Pulitzer Prizes. What are the limits of computer-generated reporting? How can this technology be used as a tool for journalist, rather than as a threat?

The U.S. Ends Control of ICANN, Gives Up Backing of the Free Speech Internet (Businessweek)

The Army’s Robot Recruiter (On The Media)