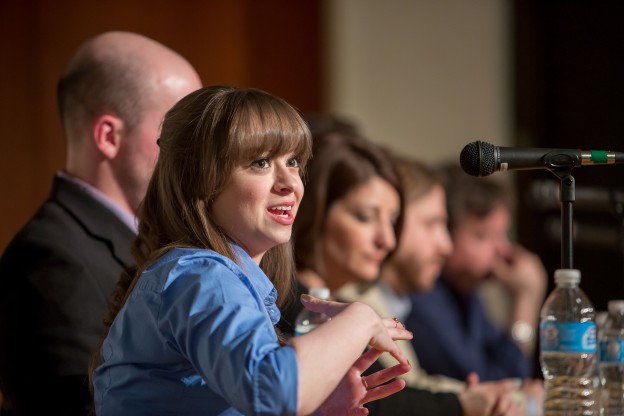 On the morning of January 9, 2014, the air around Charleston, W.Va., smelled different, unnatural, but not entirely unfamiliar. It was around 8:15 a.m. when residents first reached state environmental and health officials to complain about the odor. They described it as smelling like licorice.

“[Social media] completely changed our interaction with viewers. It truly became as important, and in some cases, more important in our ability to get information out to viewers.” -April Kaull

By late morning, the West Virginia Department of Environmental Protection sent inspectors to an area just north of Charleston where they found the source of the smell: They discovered that a chemical, later identified as crude MCHM, was flowing freely into the Elk River from a chemical storage tank at Freedom Industries.

Nearby residents had complained about a licorice-smell in the past, but this incident would prove to be more significant for the company, the officials, and approximately one-sixth of the entire state’s population. About 1.5 miles downstream, West Virginia American Water Co. treats this river water for its customers.

Local media sprung to action, using the Web and social media to help the community understand the implications of what was happening.

Social media was first to bring the story to the reporters. Later, it helped them share the story with and connect to their audiences.

Last week, the reporters who covered the story shared insights into what they learned along the way at a panel discussion at West Virginia University put on by the WVU P.I. Reed School of Journalism and Ogden Newspapers.

A Hashtag is Born

Many reporters first learned of the crisis through social media. Charleston Daily Mail statehouse reporter David Boucher was covering the beginning of the legislative session that day, and, as usual, was monitoring his Twitter feed throughout the day.

“I saw a tweet earlier in the day from the Kanawha County EMS that there was a licorice smell and they knew about it, and it was being investigated,” said Boucher. “It was an ominous tweet.”

And later that day, West Virginia American Water Co. issued a “do-not-use” water order for its service area after realizing that attempts to filter the chemical out of the water during treatment were unsuccessful.

WOWK-TV anchor April Kaull also learned about the chemical spill and do-not-use water order through her Twitter feed while she was live on-air. She waited for the next commercial break to confirm the information and then reported it to her audience when she was back on-air.

Reporter Ashton Marra said West Virginia Public Radio stayed on the air throughout the night with updates. The station’s new digital media director aggregated news from other sites for their website. They also kept a watchful eye on Twitter, re-tweeting information and comments from the public.

The Charleston Daily Mail tweeted the next morning that it would start using #wvchemleak to build a chain of tweets related to the topic.

A Direct Link to the Audience

Kaull said her station saw tremendous growth in the number of people coming to its social media feeds.

“It completely changed our interaction with viewers,” Kaull said. “It truly became as important, and in some cases, more important in our ability to get information out to viewers.”

Nearly three years into her journalism career, Marra had always tweeted information related to her stories and this story was no different. But she made a point to live tweet news conferences and public hearings on the spill. It was an efficient way for WWest Virginia Public Broadcasting’s digital media producer to update information on their website, but it also allowed for real-time conversations between Marra and her Twitter followers.

While documenting the chemical spill and water crisis for the Guardian, photographer Roger May asked if he could take over the publication’s Instagram account. He posted his photographs to the newspaper’s social media account while covering the spill’s toll on residents.

But the public and journalists weren’t the only ones to turn to social media in the crisis. Boucher says the water company and state agencies also used it to communicate directly with the public, far more than he has observed with other news events. He worries this can be a tactic used by agencies to avoid tough questions from journalists.

“I would see notices for water areas being flushed on Facebook,” Boucher said. “On the one hand, if the customer is able to get information directly, that’s something we all like, but I think there’s also spin and lack of information.”

Social media can also be mishandled by the reporters themselves. This is one of the pitfalls that Charleston Gazette reporter David Gutman pointed out when he explained that it’s “way too easy to hit ‘tweet’.”

Social is Surface Without “Boots-on-the-Ground” Reporting

Social media is a helpful tool to amplify traditional reporting, but not replace it, according to panelists.

When covering this crisis, the journalists said they could not take information provided by the water company and government officials at face value. For example, at a news conference, a doctor with the Centers for Disease Control (CDC) at first said the water was fine to use but moments later she told reporters the agency would not call the water “safe.”

“She wouldn’t call it safe because they don’t use that word,” Boucher explained. “Yesterday a different spokesperson for the CDC said they were now using the word ‘safe’ but nothing had changed,” he added, still somewhat befuddled by the agency.

Gutman also ran into issues when trying to find a source to interview at the CDC. Finally, in frustration after seeing a news release the agency issued that advised pregnant women to find an alternative water source, Gutman tracked down the home phone number of the CDC director, Tom Frieden.

Ten minutes after Gutman’s phone call to Frieden’s home, someone from the CDC called Gutman and told him they would get him someone to talk to. Gutman was able to interview a CDC scientist at 9 o’clock the next morning.

More recently, David Boucher with the Charleston Daily Mail had to push officials for a response when his FOIA requests were going unanswered.

Through his photographs of people affected by the water crisis, Roger May shared the “human” side of the story. He says this allowed the audience to connect to the issue on a personal level.

West Virginia Wesleyan College professor and blogger Eric Waggoner offered his own highly personal take on the story. He pounded out a “rant” while sitting on the sofa in his bathrobe. After he posted “Elemental” to his blog and shared it on Facebook, the Huffington Post then picked it up, and the story went viral.

Waggoner says people are hungry to connect, hear their story told, or feel represented in another person’s story.

Waggoner says that the response his article has received, including 48,000 “likes” on Huffington Post’s Facebook page; 1,500 tweets from Huffington Post’s web posting of the article; and more than 33,000 views on his blog, demonstrates that in today’s digital media environment, there is room for two kinds of storytelling online — both traditional journalism and the personal narrative shared through social media.

Emily Hughes Corio is a teaching assistant professor at the WVU P.I. Reed School of Journalism and moderated the March 24 panel on the Charleston, W.Va. chemical spill and water crisis. Prior to joining WVU in 2011, Corio was assistant news director for West Virginia Public Broadcasting. Her work has aired on NPR’s “All Things Considered” and “Morning Edition.” She recently earned the Broadcast Education Association’s “Best of Festival” award in the faculty audio competition.

Professor and Dean Maryanne Reed has been a member of the WVU P.I. Reed School of Journalism faculty since 1993. Before being named Dean in 2004, she chaired the broadcast news program and taught courses in broadcast news writing, television reporting and producing, documentary production and journalism history. Reed has a background as a local news reporter, producer and anchor. She has worked in television markets in Elmira, N.Y., Rochester, N.Y., and Pittsburgh, Pa.