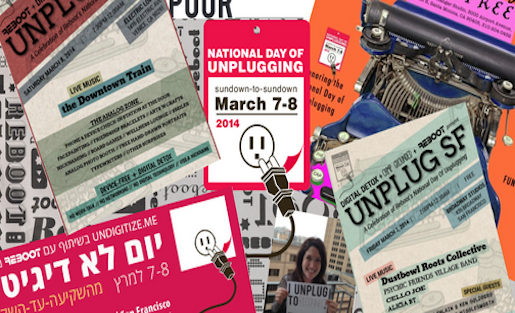 The National Day of Unplugging starts on this Friday night, March 7 to Saturday night, March 8, and encourages setting aside time for reconnecting with friends and family

To achieve clarity of mind and a spirit of relaxation, connected people across the states and overseas will participate in the National Day of Unplugging this weekend.

"The National Day of Unplugging is built on the idea that our tech-centric generation frequently misses out on life's best moments and pleasures."

The event, lasting from sundown on March 7 to sundown on March 8, 2014, is built on the idea that our tech-centric generation frequently misses out on life’s best moments and pleasures because we’re tied to our digital prizes, so we must force a day of fasting from the Internet and devices. The problem has become so severe that we often have anxiety if we’re without our gadgets, and truly don’t know what to do with ourselves when we’re stripped of our technology.

“[W]e pass the hours with our noses buried in our iPhones and BlackBerrys, chronicling our every move through Facebook and Twitter and shielding ourselves from the outside world with the bubble of ‘silence’ that our earphones create,” reads an explanation for the day of unplugging on its website.

The event is spearheaded by Reboot, a Jewish culture advocacy group that bases the idea of unplugging off of its “Sabbath Manifesto,” which calls for mental and spiritual rest. Now, of course, observing a sabbath and fasting from technology is no new concept. Reboot is inspired by the Torah’s book of Genesis, in which God commands a period of rest on the seventh day — the Shabbat. The Christian tradition also acknowledges the sabbath day, along with numerous other Western churches and denominations.

Here’s what some people are choosing to do without their electronic whatchamacallits:

At Unplug LA, live music will entertain, but the space is “device-free”. And, there’s no work talk allowed.

Reboot and another “unplugging” supporter called Digital Detox are hosting events in San Francisco and Los Angeles the evening of March 7, where they’ve invited folks who are unplugging to take in the sounds of local musicians. (But do they get to plug in their guitars, or is it all acoustic?) The two events have been declared “device-free” (you have to drop your gadgets at the front door) and “digital detox” zones. “No work-talk, no networking, no digital technology,” the event poster reads. And, you must go by a nickname. Sounds good to me.

Also in San Francisco, the city’s parks and recreation department has hopped aboard the unplugging train and is hosting a day of hiking. March 8, locals are welcomed to experience the outdoors (sans phones — hikers receive a cell phone “sleeping bag” for all devices) through a nature walk around Lake Merced. On the East Coast, participants can head to Manhattan’s Jewish Community Center for physical activity like yoga and outdoor play as well as art projects for kids and adults. Chicago sixth-eighth graders are encouraged to play laser tag, jump into Skokie’s Kaplan JCC pool and create art in honor of the national day of unplugging.

PLAY WITH THE KIDS

How often do you go to a restaurant and see an entire family of four staring at their cell phone screens … the whole time? It’s especially discouraging when mom or dad (or both) are taking breaks at the table to respond to emails when it’s clear a child is telling a story. The Osher Marin Jewish center in San Rafael, Calif., celebrated the day of unplugging early, on March 2, at its “Sundays at the J” workshop. Families were invited to take a technology detox together and simply spend time interacting through planned activities — none of which involve devices that plug in. San Francisco’s Congregation Emanu-El is hosting an afternoon of Mah Jongg, an ancient Chinese game, for area families on March 8. A similar family event is kicking off March 7 in Greenfield, Iowa. No handheld game boxes for the kids — just real, live sports and games — along with plenty of stuff for parents to do at “Iowa Unplugged.”

GO BACK IN TIME

The “unplug and type-in” event won’t allow computers — only typewriters.

A free event hosted by L.A. Marler Studio in Santa Monica, Calif., will acknowledge unplugging day with a celebration of the typewriter. Anyone is invited to come and learn the history of typewriting and purchase typewriter art and other creative items, plus mingle with fellow typewriter admirers. More than anything, the “unplug and type-in” event is meant to help attendees “feel the joy and remember the good old days.”

Young adults in Los Angeles will gather over dinner and fine wine for a special edition of the YALA “wine cluster,” held each month. Labeled an “intimate Shabbat” gathering, the event is meant to make partakers slow down and enjoy the elements without technology. The Beth Sholom B’nai Israel congregation of Manchester, Conn., will gather for an unplugged meal March 7, as will any SXSW-goers interested in a sit-down meal at the Austin Hilton. If you’re in Austin, Texas, looking for “longform conversation” on March 7, stop by #openShabbat.

At an unplugging event in Adelaide, Australia, participants with backgrounds in technology and business will gather March 7 for a breakfast seminar on being “hyper-connected” and then a large group nap. The “nap-in” will also educate attendees on the benefits of brief naps throughout the day, as a way to boost productivity and clear the mind.

DISCUSS THE IMPACT OF PLUGGING IN

A group of Greek community members at Fairleigh Dickinson University will gather pre-unplugging day to raise awareness for the “unplugged” campaign and talk about the impacts of constant connectedness. During “What Will You Unplug For?” on March 4, Greek college students in Teaneck, N.J., hope to “get enough students to realize how much they rely on social media and electronics”. Meanwhile, Austin’s SXSW Interactive event will offer a session detailing ways to develop a healthy relationship with technology, since it just isn’t practical to endure tech sabbaticals regularly. In “Beyond Unplugging, How to Stay Sane Online,” online strategist Lauren Bacon will share some of her methods for finding a middle ground between being connected yet having control over your gadgets. Hopefully, we’ll be able to share some of Bacon’s tips with you post-SXSW.

For more information on National Day of Unplugging events, or to learn how to create your own, click here.