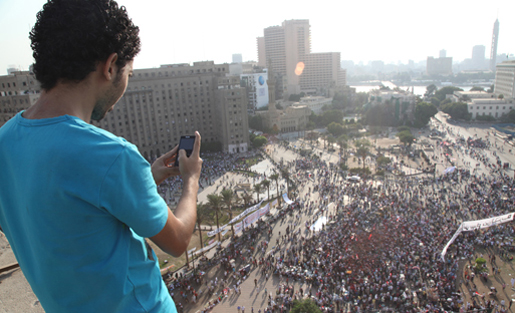 When I started working on human rights crises seven years ago, a promising and groundbreaking way to monitor violations were satellite images. The idea seemed simple enough: a single sensor in space taking pictures of inaccessible conflict zones, such as Darfur.

In 2007, satellites provided a powerful tool to monitor the conflict in Darfur. Screenshot from Eyes on Darfur.

"Human rights researchers, journalists and technologists should increasingly join forces to ensure that the potential of the millions of sensors that circumvent government control is fully realized."

Opening my laptop today in 2014, I have thousands of sensors at my fingertips, documenting war crimes and crimes against humanity in Syria—an elaborate way of describing how I spend the majority of my time on YouTube in order to track the ever-escalating human rights situation. If Vietnam was called the first “Television War,” Syria can indisputably be called the first “YouTube War.”

Fueled by the proliferation of Internet connectivity and mobile technology, the media landscape today has shifted dramatically again, having serious implications for human rights monitoring. Information is distributed less through official media outlets, such as TV broadcasts and newspapers, and more through online social networks in real-time, thus—more than ever—putting reporting on human rights abuses beyond the control of governments.

While a few years ago, sometimes our only resource was satellite imagery to gather information from inaccessible conflict zones, today we are confronted with an information and documentation overload. Nowhere is this change as visible as on YouTube, where hundreds of thousands of videos from the armed conflict in Syria effectively turned the site into a huge evidence locker.

The unique opportunities and pitfalls presented by this decentralized real-time exposure of human rights violations for investigators are plentiful, and watchdogs, journalists and courts are scrambling to deal with the “coming storm of potential evidence.”

Novel approaches to fact-finding are thus needed. The urgency of this statement cannot be emphasized enough, as videos or images are regularly distributed with an incorrect context, including in major news outlets. This is thus not a mere academic discussion, as citizen-generated documentation ultimately might have significant impact on major policy decisions.

Nothing made this more apparent as the chemical weapons attack in Syria on August 21, 2013—a game changer that almost turned Syria’s civil war into an international conflict. Within hours of the incident, hundreds of videos were uploaded to YouTube, showing the horrific impact of this illegal attack. A review of the videos by medical and chemical weapons experts, combined with testimonies from survivors and doctors, allowed human rights investigators to establish basic facts about the attack and the chemical agents used before U.N. inspectors were able to produce a comprehensive assessment through direct ground access.

At the same time, it didn’t take very long until the videos became a crucial part of the debate on the political consequences of the event: Russian authorities quickly denounced the videos as staged. Their reasoning? Apparently, they used the upload date of August 20 on some of the videos (which would put them before the attack) as evidence that the videos were produced ahead of the attack, without considering that YouTube videos bear a U.S. west coast timestamp (the location of the YouTube headquarters), and thus, 10 hours behind Syrian time.

“There are reports circulating on the Internet, in particular that the materials of the incident and accusations against government troops had been posted for several hours before the so-called attack. Thus, it was a pre-planned action.” – Russian Foreign Ministry spokesman, Aleksandr Lukashevich, August 23, 2013.

On the other side, both U.S. President Barack Obama and Secretary of State John Kerry relied on citizen videos to make their case for war:

“I went back and I watched the videos, the videos that anybody can watch in the social media, and I watched them one more gut-wrenching time. It is really hard to express in words the human suffering that they lay out before us (…) What is before us today is real, and it is compelling.” – U.S. Secretary of State John Kerry, August 26, 2013.

In a further indication of how citizen videos are used to influence major policy decisions, several chemical weapons attack videos were also used by the Senate Intelligence Committee in their deliberations about the appropriate response to the attack. As Storyful’s Felim McMahon has pointed out, some of the videos used in the Senate’s playlist are actually not the original videos uploaded to YouTube, but contain “scraped” copies of the originals, which definitely should not be considered a best practice.

Citizen videos are not always as “real and compelling” as they initially seem or as we want them to be. The list of examples of citizen videos and images posted with erroneous information is growing, not least during emergency situations.

Foreign Policy recently described a prominent case of a video posted with incorrect information: the New York Times published a front page story on a video that shows a Syrian armed group executing captured government soldiers. The incorrect date provided with the incident becomes even more worrisome considering that the story was published in the middle of a Congressional debate about the authorization of the use of military force by the United States.

‘A Marauder’s Map for war criminals?’

Looking forward, the opportunities and challenges of citizen media as evidence of human rights violations are enormous. It will require some imagination and creativity to realize its full potential. I am a strong believer that a video camera in the hand of every citizen provides unique opportunities that will ultimately revolutionize human rights monitoring and accountability efforts.

Imagine a “Marauder’s Map For War Criminals” (for the non-Harry Potter fans: the Marauder’s map allows its possessor “to track the movements of every person in the [Hogwarts] castle”). With the increase of citizen video coming out of conflict zones, it will become possible one day, through careful review and analysis, to track individual perpetrators of atrocities.

The basic technology for this already exists in its infant stage, as researchers at Carnegie Mellon University have shown. However, the “magic” in the human rights field will not come from a perfection of technology, but rather tapping into networks of volunteers and local expertise, both in the creation and assessment of content. Only specialized networks of trained volunteers will be able to filter out the level of detail needed from the overwhelming amount of video. We thus recently launched a sort of “Verification Corps,” working with students to filter through masses of YouTube videos coming out of Syria for relevant content.

Students are being trained in the basics of video validation. Tallahassee, Fla., September 2013. Photo by Christoph Koettl.

Of course, proposing something like this as a human rights activist can put me on a slippery slope, as repressive governments can use the same approach to track human rights defenders. However, I believe it forces a much-needed debate about visual anonymity and privacy, and the further improvement of protection tools such as YouTube’s face blurring tool, in order to ensure the necessary safety for activists. I am well aware of the downside of technology for human rights defense, a dichotomy we will address with our colleagues from WITNESS and The Guardian Project at this year’s SXSW Interactive festival.

There’s no doubt about the impact citizen media can have on the documentation of, and ultimately accountability for, the most egregious human rights violations. In 2010, for example, former U.N. Special Rapporteur Philip Alston used cell phone footage to uncover extrajudicial executions in Sri Lanka. However, what we are lacking and what is urgently needed is the proper tools and methodologies that will allow to unlock the YouTube evidence locker. This can be accomplished both through the hands-on trainings of investigators in assessing content and the development of mobile apps—such as InformaCam, Martus Mobile or International Evidence Locker—that collect relevant metadata and securely store the footage.

Additionally, technology companies can play a crucial role in verification efforts by, for example, integrating documentation apps as a default in cell phones, or including a reverse video search functionality in hosting platforms, which would allow for easier identification of the original video.

With such huge potential—and risk to do harm—I believe that not one profession alone can tackle the opportunities and challenges that come with citizen generated digital evidence. Human rights researchers, journalists and technologists should increasingly join forces to ensure that the potential of the millions of sensors that circumvent government control is fully realized. We owe that to the frontline human rights defenders and citizen journalists that often risk their lives to uncover the truth. In our viral age, where a video captured on a cell phone by an ordinary citizen has the potential to both bring war criminals behind bars or influence major policy debates such as going to war, too much is at stake to just improvise on the go.

Christoph Koettl is Emergency Response Manager at Amnesty International USA, where he focuses on technology, social media and human rights. He currently is on a research sabbatical to write about citizen media and human rights fact-finding and is a contributor to the Verification Handbook: A definitive guide to verifying digital content for emergency coverage, published in January 2014. Follow him @ckoettl. The views expressed are those of the author, and do not necessarily reflect the positions of Amnesty International USA