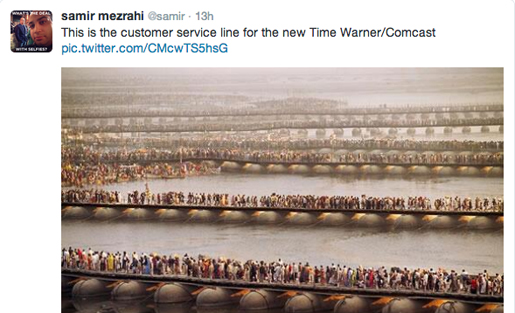 BuzzFeed's Samir Mezrahi had some fun at Comcast/Time Warner Cable's expense on Twitter. He joined the Mediatwits this week.

First, cable company Charter Communications made a run at buying Time Warner Cable. That ended up being a prelude to cable and media giant Comcast swooping in to buy Time Warner Cable in a $45 billion deal. The combined firm would serve 30 million pay TV subscribers (Comcast would divest 3 million subscribers it would gain). But would customers win or lose if the deal is approved by the Feds?

And while millions are tuning in to this year’s Winter Olympics to watch world-class athletes compete, there is another draw to watch Sochi: schadenfreude. Horror stories from the Russian city — from the culling of stray dogs to hotel rooms still under construction when reporters checked in — have flooded the Internet since the Olympics began. The Twitter feed @SochiProblems, which has been highlighting journalists’ tweets complaining about Sochi, has 100k more followers than the official @Sochi2014 Twitter account. Many of the tweets highlighting dysfunctional toilets and concerning signage are darkly humorous, but is the viral nature of Sochi-hate overshadowing the Games themselves?

This week on the Mediatwits, we’re joined by special guests Zach Seward at Quartz and Samir Mezrahi at BuzzFeed to talk about the cable mega-merger and social media coverage of the Olympics. We also have regulars Andrew Lih of American University and social media guru Sarah Evans, with PBS MediaShift’s Mark Glaser hosting.

Samir Mezrahi has been with BuzzFeed since 2012 and is one of the site’s Senior Editors. He runs BuzzFeed’s main Twitter account (@BuzzFeed) which has over 750,000 followers, as well as the site’s Facebook’s page, which has 1.7 million likes. Additionally, he oversees social media for each of the site’s verticals. Mezrahi attended the University of Oklahoma and lives on Long Island.

This isn’t the first time that the media has looked past the arenas to report on problems in the countries hosting the Olympics. In 2008, plenty of articles highlighted human rights concerns (and pollution) in China in the run-up to the Summer Games. The news stories about Beijing’s crackdown on dissent closely parallel this year’s many articles about LGBT rights in Russia. One difference — Beijing’s problems didn’t become a meme. As the mocking tweets and articles pile up, some commentators are wondering if the #SochiProblems flurry has gone too far to politicize the games. Are journalists spending too much time in Sochi’s sole gay club trying to join the bandwagon of condemning Russia? How is the social media schadenfreude affecting the way viewers watch the games and perceive Russia? Plus, NBC is not letting people see live feeds online unless they subscribe to cable, and still time-delays prime-time coverage. Has that bothered people as much as during the London Games in 2012? And athletes are banned from posting any video or audio on social media.