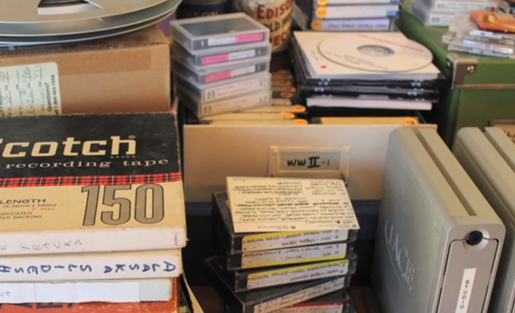 Facilitating CC licensing is part of Pop Up Archive's larger goal of helping to establish best practices for safe sharing of digital audio.

Our goal at Pop Up Archive is to make audio searchable and build an archive of sound from journalists, oral historians, and media organizations from around the world.

The six licenses CC licenses are a seminal step toward facilitating safe sharing and reuse of digital media on the web. (Read about the CC licenses.) Creative Commons is great when you know your rights to a work. But what happens when you don’t know your rights? We’ve seen these questions from:

At Pop Up Archive, facilitating CC licensing is part of a larger goal to help establish best practices for safe sharing of digital audio. We work with a lot of public media producers, non-profits, and scholars — and some commercial media entities, too. Many of the rights holders to archival recordings can’t be found, or are multinational corporations that have absorbed many smaller stations over the years (see this NPR blog post from Feb 2013 for more on why U.S. copyright law effectively locks up many archival recordings). We’ve seen too many opportunities go to waste because creators and educators are afraid to navigate the murky digital copyright waters by themselves.

For starters, one complexity we encountered writing our Terms of Service: What happens if someone wants to upload another creator’s CC-licensed content to our site? In order to provide their services, many platforms that take user-generated content (i.e. YouTube) require a broader license than Creative Commons affords (thanks to Elliot Harmon and Eric Steuer for their help):

So, the terms required by most platforms for digital media (i.e. YouTube) make it technically illegal to upload others’ CC-licensed works to those platforms. For example, when you upload a video to YouTube, you give YouTube a nonexclusive, worldwide, royalty-free, no-fee license to encode, reproduce, modify, transmit, distribute and create derivative works. That license gives YouTube the right to transcode your video so that it plays back across multiple browsers and captions it for you automatically — but there could be other ways of accomplishing this.

Where to begin? We want to forge a path for platforms to deliver their services but also allow third-party, CC-licensed content without requiring a sublicense. Pop Up Archive can’t transcode or transcribe audio files unless we have rights to do so, but we’re working with Creative Commons to make our terms less restrictive.

Platforms like ours that manipulate user-generated content as part of their services can and should keep working to improve end-user license agreements (EULAs). But a lot of people don’t ever read EULAs, and websites are usually slow to update them.

It would also help if there were a simple, powerful, common technology for attribution (for comparison: Github does a great job of showing the provenance of code stored in public repositories). If it were easier for hosted platforms to adopt a common attribution technology, we might live to see a day when those platforms can accept CC-licensed works while honoring the terms of the CC licenses.

We agree with Dan Cohen, director of the Digital Public Library of America, that while technical and legal solutions are part of the equation, we need to address rights issues from a social perspective, too. For a quick crash course, the Open GLAM (Galleries, Libraries, Archives, and Museums) principles are a helpful starting point, but they speak more to institutions than individuals.

We know this is tricky — that’s why we want to open a dialogue about it. So grab an oar, and let’s paddle these waters together.

Reply in the comments to this post, drop us a line (edison at popuparchive dot org), or if you’re up for a challenge, see how deftly you can tweet about copyright. We’re all ears @PopUpArchive.

This story originally appeared on the Pop Up Archive blog.