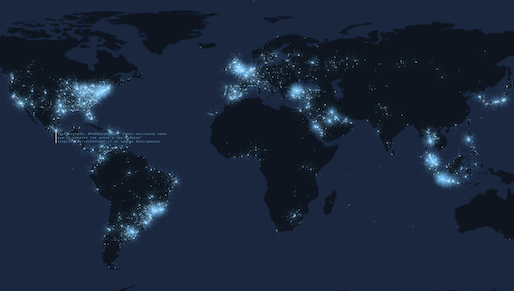 This post was co-authored with Kibret Yebetit and Jeya Lorenz

The Human Rights Channel works to amplify videos that document human rights issues around the world. But how do we find those videos? One way is with help from our partners at Storyful, who find and verify social media when news breaks. Another important source is our Twitter feed. We follow dozens of community media outlets, activists, and human rights workers filming, sharing, and reporting news from their own communities, and we recommend you do too. We wanted to share some of the best citizen reporting on human rights issues.

But first, the obligatory qualifications. This list is by nature incomplete. Who do you follow that tweets citizen video and human rights? Please — please! — add your suggestions in a comment on this original post or on our online form.

We’ll follow up with a list the citizen journalists you follow, and start to follow them ourselves. Finally, while these are some of the sources the Human Rights Channel monitors, we always fact check and verify their videos before we publish their media. We urge you to do the same with information you receive in the social media landscape. That said, click,  follow, and RT!

@nawaat – Tunisia
This blogging collective tweets out its reports, commentary, and video predominantly from Tunisia but also across the North African region.Tweets in: Arabic, French, and English

@SAHARAWI VOICE – Western Sahara
With multiple contributors, Saharawi Voice produces videos out of the camps in southern Algeria where tens of thousands of Saharawi refugees have lived since the Western Sahara War in the 1970s. It tweets news, culture, videos, and other information about the Saharawi population. Tweets in: English

@NubaReports – Sudan
The government of indicted war criminal Omar al-Bashir prohibits journalists from covering the Kordofan region of Sudan, where violence has displaced thousands of people. Nuba Reports — a collective of local reporters employing HD video and crisis mapping — is the only outlet focused on covering conflict and displacement in the region. Tweets in: English

@Togovisions & @UnTogoVI – Togo
Formerly one alternative news outlet that split into two, Togo Visions and Le Togo VI are independent citizen media networks that use YouTube videos to capture social movements, civil society, and government repression in the west African nation where state censorship of the media would otherwise inhibit such information distribution. Tweets in: French

@BriKouriAyiti – Haiti
This Haitian community media organization produces original videos covering the ongoing crisis from the 2010 earthquake, such as the forced eviction of tent camp residents. They tweet their own videos and other Haitian human rights news. Tweets in: English, Creole, and French

@Pedazosdelalsla – Cuba
This Miami-based blogger tweets news from dissident activists and alternative media outlets in Cuba, including netizen Yoani Sánchez, the Damas de Blanco, and UNPACU, a group that uses mobile video to document political activism and repression in Cuba. Tweets in: Spanish and English

@prensaopal – Chile
This alternative media outlet specializes in filming protests in Chile, including those that concern austerity measures and assassinations of Mapuche community leaders, and producing YouTube videos with music, high-quality visuals and strong political messages. Tweets in: Spanish

@PresnaRural  – Colombia
Rural Colombia is where the country’s civil conflict of more than half a century continues — with massive internal displacement, violence, and other human rights violations. But it is by and large inaccessible to the Bogotá-based mainstream media, and this alternative media outlet strives to fill that gap. They tweet their own articles and videos as well as other news relevant to Colombia’s campesino communities. Tweets in: Spanish

@roblesmaloof  –  Mexico
Aside from being among the most vocal human rights activists in Mexico, counting among his credentials law, digital activism, journalism and academia, Jesús Robles Maloof is prolific on Twitter, sharing photos, videos, and news from Mexico’s social justice movements, as well as tips for those filming in protests on how to stay safe. No wonder Human Rights Watch, Amnesty International, Liberation Tech, and more than 40,000 other individuals and organizations are following. Tweets in: Spanish

@EyeOnTheGround – United States
Nathan Grant is an independent citizen journalist, tweeting and filming social justice activism, not just within the US but globally. Tweets in: English

@RohingyaVision – Myanmar (Burma)
This independent media channel was created by a group of Rohingya youth to tell stories of the heavily persecuted ethnic group. Its English tweets include links to original articles and YouTube videos as well as aggregated human rights news about Rohingya Muslims in Myanmar and the region. Tweets in: English

@SOVATH_HRD – Cambodia
Coined the “multimedia monk,” the Venerable Luon Sovath is a Cambodian human rights activist and WITNESS partner who uses video and social media, often at great risk, to defend Cambodian communities against forced evictions and land grabs. His tweets are predominantly in Khmer, but he also tweets English information about human rights, such as this video of clashes between police and garment workers in Phnom Penh. Tweets in: Khmer, and some English

@videovolunteers – India
Video Volunteers trains residents of developing regions to be community journalists. Residents use video to document and expose human rights abuses in their communities. Video Volunteers has created the largest network of Community Producers in the world. They regularly tweet the videos that these producers create. Video Volunteers is also a WITNESS partner. Tweets in: English

@stratosmoraitis – Greece
This activist and citizen journalist comments (mostly in Greek) on the deteriorating situation in the country and sources photos and videos demonstrating support for the anti-fascist movement in Greece. Tweets in: Greek

@Mosireen – Egypt
Born out of the explosion of citizen media during the Egyptian uprising, this collective of filmmakers focuses on human rights issues in Egypt and elsewhere in the Arab world. Their Twitter feed, boasting more than 55,000 followers, distributes their latest videos and shares information about human rights. Tweets in: English and Arabic

@ShaamNewsEn – Syria
Based in Damascus, Shaam News Network (SNN) aggregates and translates some of the most compelling video footage from a network of known and verified community media outlets across Syria, as well as its own correspondents, becoming a go-to source for many international media outlets. Its Twitter feed its a prolific docket of news from the ground across the country. Tweets in: English

@alhaq_org – Palestinian Occupied Territories
A Palestinian human rights NGO based in Ramallah, West Bank, Al Haq documents violations of the individual and collective rights in the occupied territory and tweets relevant news as well as its own videos. Tweets in: English

@Saudiwoman – Saudi Arabia
Eman Al Nafja is a Saudi blogger and online activist, whose posts focus on feminist issues in Saudi Arabia ranging from reporting arrests to sharing videos of protests movements. Most recently, she was one of the organizers of a campaign to end Saudi Arabia’s ban on women driving, and curated videos of women driving on YouTube. Tweets in: Arabic and some English