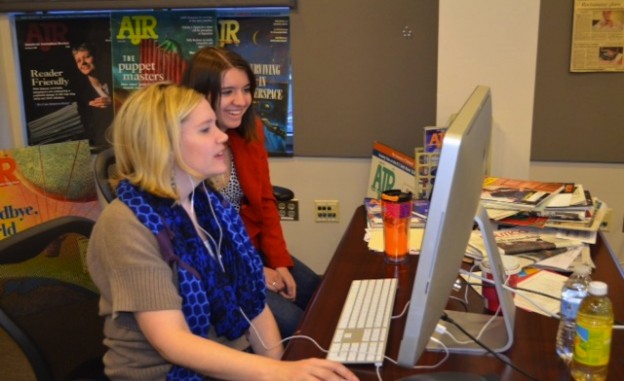 On the top floor of the University of Maryland’s journalism school, students are learning about the future of news by covering it.

Students writing for AJR have covered how BuzzFeed editors use data to help stories go viral, modern dilemmas faced by Millennial journalists who started Twitter accounts in their tweens, and how Google Glass can be used in storytelling.

Like most journalism schools, the Philip Merrill College of Journalism wants to inspire students to innovate as it trains them to enter a news industry struggling to develop new and effective business models to support high quality journalism.

The school saw an opportunity to put students more in touch with the people, companies and ideas that are transforming the news industry when it recently converted its 36-year-old print magazine, American Journalism Review, to an all-digital news service.

The core idea was simple: Students would learn about media entrepreneurship and change by reporting and writing about it for AJR.org. If they hope to innovate, a key first step is understanding how the world around them is transforming.

The magazine, based at the University of Maryland for decades, ended its print edition in the fall and launched a revamped website in December with a new focus on innovation in news and enhanced student participation. The new model is a hybrid, combining content from students and professionals, but with much more student content than in the past.

So far, students writing for AJR have covered how BuzzFeed editors use data to help stories go viral, modern dilemmas faced by Millennial journalists who started Twitter accounts in their tweens, and how Google Glass can be used in storytelling.

In the past, a few Merrill students served as AJR interns and produced stories as part of a small “capstone” class each semester, a tradition that is continuing at the school.  Merrill, like many journalism schools, believes deeply in the importance of students learning by doing in a “teaching hospital” model of curriculum.

Capstone classes typically are filled with seniors and require them to apply knowledge and skills acquired in all their journalism courses by reporting, writing and producing stories for real-world news outlets.

The new all-digital AJR pushes that teaching hospital model further into other types of courses, becoming a platform for a broader slice of the curriculum — something the college believes to be relatively unique among journalism schools that produce news websites and other real-world products.

AJR’s staff still teaches a capstone for seniors who report for the website and still has paid interns. What’s new is how AJR is starting to publish high-quality work from other classes, including ones that aren’t about traditional reporting and writing. For example, students taking required courses in media law, the business of news and research methods contributed content to AJR during its first month after the new website launched.

The idea is to have faculty members serve as front-line editors, selecting some of the best work from their assignments and helping edit it for publication in AJR.  Faculty members are in the driver’s seat, deciding which assignments are appropriate and whether to participate at all.

This model widens opportunities for students to get publishing exposure in a professional publication. It also effectively incorporates a larger number of younger students — sophomores and juniors — into the teaching hospital model, along with the seniors and master’s students who have traditionally participated.

One of the debut AJR posts focused on records requests for reporting on guns.

One of the first stories AJR published in this model was from a student taking media law who recounted the information battle  a Washington Post reporter waged to get data for two investigative stories he wrote about guns.

The student, Megan Brockett, interviewed reporter David Fallis for an assignment in a class taught by Baltimore Sun distinguished lecturer Diana Huffman. To teach students about open records laws, Huffman asks them to interview professional journalists about stories they wrote based on information obtained through records requests.

After interviewing Fallis, Brockett used a standard question-and-answer format to summarize the challenges he encountered pursuing Freedom of Information Act requests for two reports about seized guns that ran in the Post in 2010 and 2013.

The Fallis interview published in AJR this month, “Chasing the Truth on Guns,” was edited first by Huffman and again by AJR news editor Lisa Rossi. It offers a behind-the-scenes account of what Fallis had to know — and do — to persuade the District of Columbia police department to cough up the data he needed to write about guns seized in police investigations.

“Normally in the class they would write a memo,” Huffman said. “But I asked them to think of this as a journalism assignment and having it published.”

Huffman said one reason she asks students to interview reporters who use the Freedom of Information Act is that it helps them see how media law is useful in real-world scenarios. Having their interviews published takes the assignment one step further into the real world, she added, while providing the benefit of national exposure.

“AJR obviously is a national platform that is a brand people know,” Huffman said. “And they don’t always have the opportunity as students to get their work seen in that place.”

This kind of coordination in a journalism school can be challenging, but the initial experiments have worked well, according to Rossi. The college plans to expand the model to other classes in the spring semester. Eventually, AJR would like to work with professors and classes at other universities.

Rossi said AJR wants its media coverage to showcase different perspectives as well as topics. “The fact that AJR is getting content from many corners of the college means a diversity of information is flowing onto the site,” she said, ”everything from the best mobile journalism tools to how the media should cover extremely sensitive news events, such as the anniversary of the shooting in Newtown.”

Beyond covering stories of innovation and transformation, students are learning from AJR in another, more indirect way. As part of its radical makeover, AJR is operating as a media startup, giving students and faculty who participate a first-hand look at what it takes to build something from the ground up.

Mussenden is a lecturer of digital journalism at the University of Maryland Philip Merrill College of Journalism. He co-directs the college’s award-winning Capital News Service, specializing in interactive graphics and Web apps as he oversees students covering news from bureaus in Washington, D.C. and the Annapolis State House. He previously worked as a senior multimedia Washington correspondent for Media General News Service and as a reporter for the Orlando Sentinel.

Walker is visiting professor in digital innovation at the University of Maryland Philip Merrill College of Journalism, where she teaches courses in multimedia journalism and social media. Previously, she was a reporter, editor and columnist for The Washington Post; she also served as its editor-in-chief of its website and vice president of its digital news division in the early days of the Web.