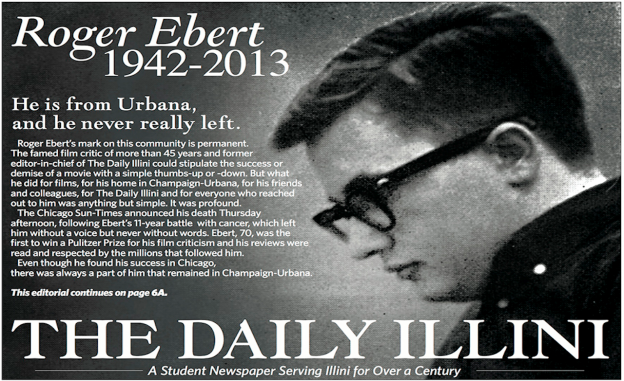 The front page of The Daily Illini honored Roger Ebert on April 5, 2013.

There are plenty of contests out there for college journalists. The prizes range from scholarships to fancy plaques, awarded to the writers, designers, photographers and editors who went above and beyond to seek truth and report it.

"Hundreds of editors and writers at The Daily Illini have looked to Roger Ebert for inspiration, for direction, as they pursue their own career paths, be them in journalism, the arts or the sciences." -The Daily Illini Editorial Board

As 2013 comes to a close, I think these student journalists deserve a little bit more recognition. To honor their journalistic endeavors, we’ve rounded up this year’s best articles, projects and multimedia from student publications across the country.

When Andy Boyle, news apps developer at the Chicago Tribune, caught wind of a student multimedia project called “Suspended justice,” he summed up his reaction in tweets:

Hey, journalism employers! Take note of everyone who worked on this story and hire them: http://t.co/PejpaVR5be

“Suspended justice” comes from the Indiana Daily Student at Indiana University, and it is commendable for several reasons: a beautiful presentation of photo, video and audio; clean navigation; and an incredible story about David Camm, a man accused of murdering his family, then set free this past October.

Missy Wilson is responsible for the site itself; she built it on Foundation and coded with HTML, CSS and bits of jQuery. Caitlin O’Hara snapped the photos and put together the videos that appear throughout the five chapters. Katie Mettler is the writer — she discovered the story in the spring. When the trio came together in September, they combined their skills to create something amazing.

The interactive timeline begins on September 28, 2000, when the Camm family was found murdered.

One of the most impressive features of the piece is the interactive timeline spanning from 2000 to 2013. Wilson built it with TimelineJS, an open-source tool from Northwestern University Knight Lab. She also added a Colorbox plugin, which allows readers to refer back to the timeline while moving through the story.

“[TimelineJS] uses Google spreadsheets and is pretty easy to customize and use, which was great for this project because we were continuously changing things and working on deadline,” wrote Wilson via email.

For the record, Boyle is right — if any students deserve jobs after graduation, it’s Mettler, O’Hara and Wilson.

At Colorado State University, Zane Womeldorph will be remembered for his weekly written wit. He graduated in December, ending his college experience with one last column for The Rocky Mountain Collegian:

“I’m not sure where life will take me, or even where I want it to. All I know is that this has been fun while it lasted. The future is a frightening, thrilling blank slate, and it’s time to move on,” he wrote.

One of Womeldorph’s columns, titled “Sports: from first to last.”

With those words, Womeldorph retired from his reign as columnist. Before 2013 ends, I’d like to honor his work by giving him this unofficial (yet highly esteemed) award. Womeldorph’s columns covered everything from the Employee Non-Discrimination Act to his laundry, but perhaps the most notable piece from the past year is called “Sports: from first to last.”

This particular column is the perfect example of how Womeldorph uses humor and short stories to make a larger point about growing up. One line is serious: “Time tends to erode all things, namely competitive fire and the human body.” The next line makes the reader laugh: “Sports have transformed from the building blocks of my identity to the most fun way to keep from getting fat.”

It’s genius, really. And for that, Womeldorph’s columns deserve a round of applause.

When I scroll through The Daily Emerald’s photos, part of me wishes I chose to attend the University of Oregon instead — both to learn from these photographers and live on the idyllic campus.

This month, photographers captured gorgeous shots of the campus blanketed in white, as well as photos of the snowball fights that followed. I’ll let the pictures do the talking:

Ryan Kang took this photo of the Lillis Business Complex at the University of Oregon. Used here with permission

Michael Arellano snapped this photo of two Oregon students in the snow. Used here with permission.

The Daily Emerald’s sports photography deserves a mention as well. Online, each sharp picture takes up the entire screen, making the viewer feel like a part of the game. Be sure to take a peek at photos from a November football game against the Stanford Cardinal, taken by Michael Arellano, Ryan Kang and Taylor Wilder.

When Roger Ebert died in April, students at his alma mater, the University of Illinois at Urbana-Champaign, remembered him with a spectacular spread on the front page of The Daily Illini. The editorial board’s moving column, “Roger Ebert remembered,” was shared again and again online as the community celebrated the life and legacy of Ebert.

This graphic ran on the front page of The Daily Illini on April 5, 2013.

Ebert had a special tie to The Daily Illini — in 1963, he served as editor-in-chief of the student publication. As the editorial board wrote, “his roots here are strong, and he has been there for us since he left in 1964.” Some of Ebert’s very first film reviews were published in the pages of the DI, and decades after graduation, he helped the paper escape financial debt by writing a letter to alumni.

The film critic had a lasting impact on the University of Illinois, and the DI truly honored Ebert with its editorial and overall coverage.

It wouldn’t be 2013 without an award for outstanding social media usage. This one goes out to the Washington Square News at New York University. NYU’s student newspaper is active on Twitter, Facebook and Instagram. This publication knows how to look great online.

With more than 6,500 followers on Twitter and over 4,400 likes on Facebook, the feeds are mostly composed of WSN articles and blog posts. What sets this newspaper apart, however, is its smart branding and attention to detail: the WSN logo is on everything, each link is shortened via bitly and posts and tweets formatted and spelled correctly. Also, WSN uses Facebook the right way. Instead of sharing photo posts, there is a heavy emphasis on link posts with thumbnail images.

On Instagram, WSN lets its hair down. So far, the editors have used it to share a few photos from the office. See below. (Apparently, WSN is taking a cue from Mashable by allowing dogs in the office. That’s the new thing.)