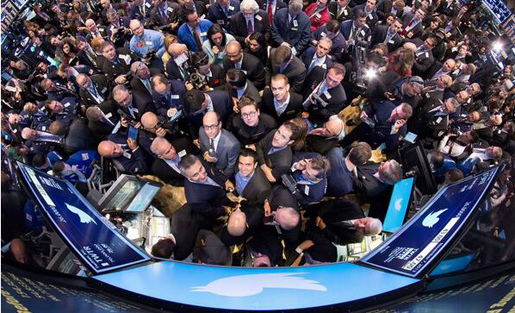 In this photo courtesy of @NYSEcam, Twitter debuts on the stock exchange floor.

Though Twitter has never turned a profit in its seven years of existence, its public debut on Thursday valued the company at a whopping $31 billion dollars. Twitter’s inaugural day on the New York Stock Exchange was met with much fanfare after a week of raising its share price, reflecting high demand for the social media’s stock. Though the trading price was set at $26 per share Wednesday night, the shares began trading for $45.10 — 73 percent higher than its initial asking price. But will the high last? We’re joined by media strategist Sarah Evans and Reuters’ Felix Salmon to discuss the initial public offering. In addition, we’ll talk about eBay founder Pierre Omidyar’s new brainchild: a digital media outlet that has already attracted the talent of the Guardian’s Glenn Greenwald and Dan Froomkin, formerly of the Washington Post, among others. We’ll chat about the typical challenges and decisions that a digital media outlet faces as it emerges. We’re also joined by regular guests Monica Guzman of the Seattle Times and Geekwire, American University’s Andrew Lih, and our host, MediaShift’s Mark Glaser.

On Thursday, Twitter began trading publicly after a week of raising its target share price that indicated the company’s IPO optimism. But there are reasons to be skeptical about the company: its slowing rate of new users and failure to make a profit mean that some believe the company is overvalued. Twitter’s debut comes in the wake of Facebook’s messy spring 2012 IPO, with its initial $38 shares plummeting to $18 by last September. So far, though, the public offering seems to have proceeded without any disasters, leading the banker who organized the IPO, Anthony Noto, to issue a public “phew” over Twitter. Regardless, many investors have voiced skepticism that the soaring Twitter shares will stay gold. Is Twitter a bubble that is about to pop? Or is there something about Twitter that is sturdier than its social media peers?

Pierre Omidyar has dabbled in news before, backing a variety of news and transparency-focused ventures with the Omidyar Network, including the Poynter Institute and the Transparency and Accountability Initiative, and he also launched the Hawaii non-profit site Civil Beat. He considered buying the Washington Post, before realizing that an investment of that size could bankroll an entirely new media organization, he told the New York Times. He began talks with Glenn Greenwald, a journalist famous for his involvement in the Edward Snowden leaks this past summer. The venture’s plans were leaked before the media organization could even give itself a name, but the outlet, which for now is calling itself NewCo, is starting to show its ambitions. NewCo won’t just house investigative journalism, but every section that is common in a media outlet, writes Omidyar. But how does one go about creating the next New York Times or Huffington Post? What should its vision be? Will rich businessmen with an interest in news like Omidyar and Jeff Bezos be what turns the media industry around?