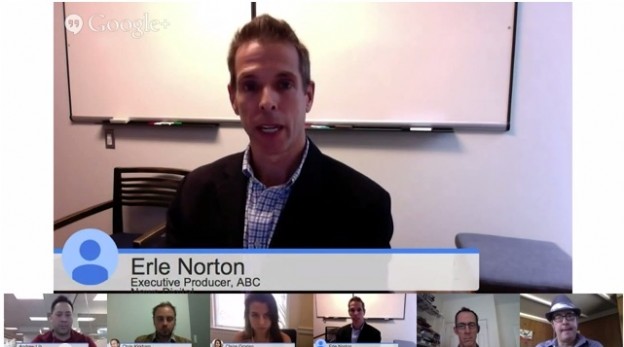 Erle Norton of ABCNews.com talked about broadcast news going digital on this week's episode of Mediatwits

BuzzFeed is looking to expand beyond its reputation for cat pictures and rapid-fire, socially viral lists. This Monday, the site announced the creation of its own investigative reporting unit under the supervision of Mark Schoofs. Schoofs is most recently a senior editor at ProPublica, a renowned non-profit investigative journalism organization. And BuzzFeed isn’t the only digital native site that’s embracing investigative reporting; this week, the Huffington Post published a penetrating report on a network of juvenile detention centers riddled with abuse and mismanagement. For this episode of Mediatwits, we’re joined by BuzzFeed’s Mark Schoofs, as well as Chris Kirkham, the reporter behind the Huffington Post report. We’ll also be joined by Erle Norton, the new executive producer of ABC News Digital, to discuss how broadcast media are evolving in the increasingly digital news ecosystem, as well as ABC’s partnership with Yahoo News.  Mediatwits roundtable regular and two-time host Andrew Lih of American University will chime in as well, and Mark Glaser is back from paternity leave to host.

Erle Norton is the Executive Producer of ABC News Digital and oversees editorial and video operations across ABCNews.com. Prior to joining ABC News, Erle served as the Editorial Director of Reuters Digital Video at Thompson Reuters where he managed video operations for Reuters.com and other platforms worldwide. Before his move to Thompson Reuters, Erle oversaw NYPost.com where he managed editorial content for the site and helped increase integration between the digital and print teams.  Throughout the 1990s, Erle was a business reporter for the Wall Street Journal and also served as one of the first employees at TheStreet.com.

Chris Kirkham, 29, is a business reporter at the Huffington Post in New York, where he has worked for three years covering the business of higher education and prisons. Previously he worked as an environmental and politics reporter at The Times-Picayune in New Orleans. For the newspaper’s coverage of the BP oil spill, he and a team of reporters won the Edward J. Meeman Award for environmental reporting from the Scripps-Howard Foundation and received second place for Columbia University’s John B. Oakes Award for environmental journalism. A native of Texas, Chris earned Master’s and Bachelor’s degrees from the Medill School of Journalism at Northwestern University.

Mark Schoofs is currently a senior editor at ProPublica, a key institution in American investigative journalism, where he has been since 2011. Before that, he had worked for more than 11 years at The Wall Street Journal, where he was a foreign correspondent and an investigative reporter for Page One. Schoofs played a key role in investigations ranging from abuse and fraud in Medicare to the international methamphetamine trade. He contributed to the Journal’s coverage of the Sept. 11 attacks, which won the 2002 Pulitzer Prize for Breaking News. Prior to the Journal, Schoofs was a staff writer at The Village Voice, where he won the 2000 Pulitzer Prize for International Reporting for his eight-part series on AIDS in Africa. He has also written for The New York Times Magazine, The Washington Post, Esquire, Out, and many other publications. Schoofs has reported from more than 25 countries on four continents. He holds two United States patents. He earned a B.A. in philosophy from Yale University, where he has also taught a seminar on journalism.

While digital native sites such as Quartz, BuzzFeed and the Huffington Post are in their element online, traditional news media — especially broadcast — has been forced to adapt to a new digital age. Many outlets are pouring capital into their digital platforms, redesigning websites and adapting to the constant news cycle that the Internet demands. ABC News, among them, has recently hired Erle Norton from Thompson Reuters’ video operations in order to oversee the network’s expansion of their digital news department. The outlet has also partnered with Yahoo News to expand its online presence and jockey for relevance in the digital sphere. Broadcast outlets are faced with a unique problem in the digital age: how do they package their product for an easily-bored, constantly clicking audience? Especially as non-broadcast outlets such as the New York Times and Wall Street Journal create original video content online, the digital identity of traditional broadcast journalism looks increasingly murky. How has ABCNews.com evolved over the years and what’s ahead?