How a Pay Wall Changes the Engagement Equation 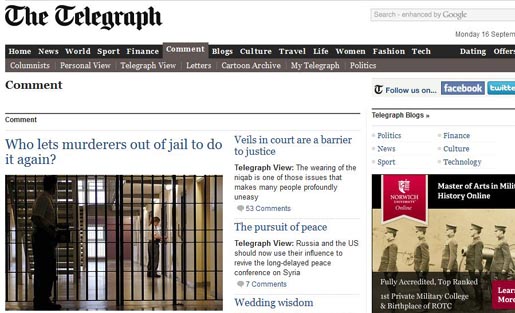 Reader engagement tools such as polls and comments are designed to keep subscribers coming back to the Telegraph's site.

The advertising-driven model of digital journalism depends on maximizing page views, as The Onion bluntly reminded us when it  mocked CNN.com for leading its homepage with Miley Cyrus. But when a news organization introduces online subscriptions, it reconfigures the benchmarks for success.

Last spring, The Telegraph in London became the United Kingdom’s first general-interest newspaper to adopt a metered pay wall, allowing 20 free views a month before requiring users to sign up for a one-month trial subscription. The pay wall has been in effect for international users since November.

“I see social, really, as the bridge between taking people from the outside world, general browsers, and trying to convert them into subscribers." -Kate Day

When visiting The Telegraph in July, I asked social media and engagement editor Kate Day how the pay wall had changed the newsroom’s approach to web traffic. Day said she and her colleagues now closely monitor metrics that help explain what gets people to click through and subscribe — for instance, the last page users visit before they sign up for a subscription.

“What has changed is that just getting volume and no loyalty is no longer as valuable,” Day said. “It’s great marketing if you have a story go viral, but we’re not pushing for volume in the way that, say, Huffington Post might be in their social accounts. We’re much more pushing for interaction and engagement with people, and trying to build loyalty at every step.”

Overall traffic figures still matter, Day said. But as the stats come in, unique visitors are viewed “hand in hand” with subscription sign-ups. And on social media channels, she said, The Telegraph strives not just to extend the reach of its stories but also to nudge readers to subscribe.

“I see social, really, as the bridge between taking people from the outside world, general browsers, and trying to convert them into subscribers,” Day said.

On the Telegraph site itself, reader engagement tools like polls and comments are designed to keep subscribers coming back.

“It’s a useful way to keep [subscribers] feeling as though they’re getting value from the site,” Day said. “Because if each time they’re interacting in some way, spending a little bit longer, that will encourage them to subscribe again next month.”

The quest to instill reader loyalty has been a recurring theme during my visits to news organizations over the past year for my book project,  Engaged Journalism. Maintaining a base of engaged, loyal readers — not just fickle, drive-by traffic — is a matter of business survival at a time when the news industry is beginning to rely less on advertising and more on subscribers as a primary source of revenue.

Page views, retweets and Facebook “likes” can serve as a useful barometer of overall reader interest. But for pay-walled news sites — even those with a soft pay wall, like The Telegraph — the ultimate sign of engagement is when readers pull out their credit cards to subscribe.