Fresh from the Reese News Lab: Capitol Hound and NewsLing 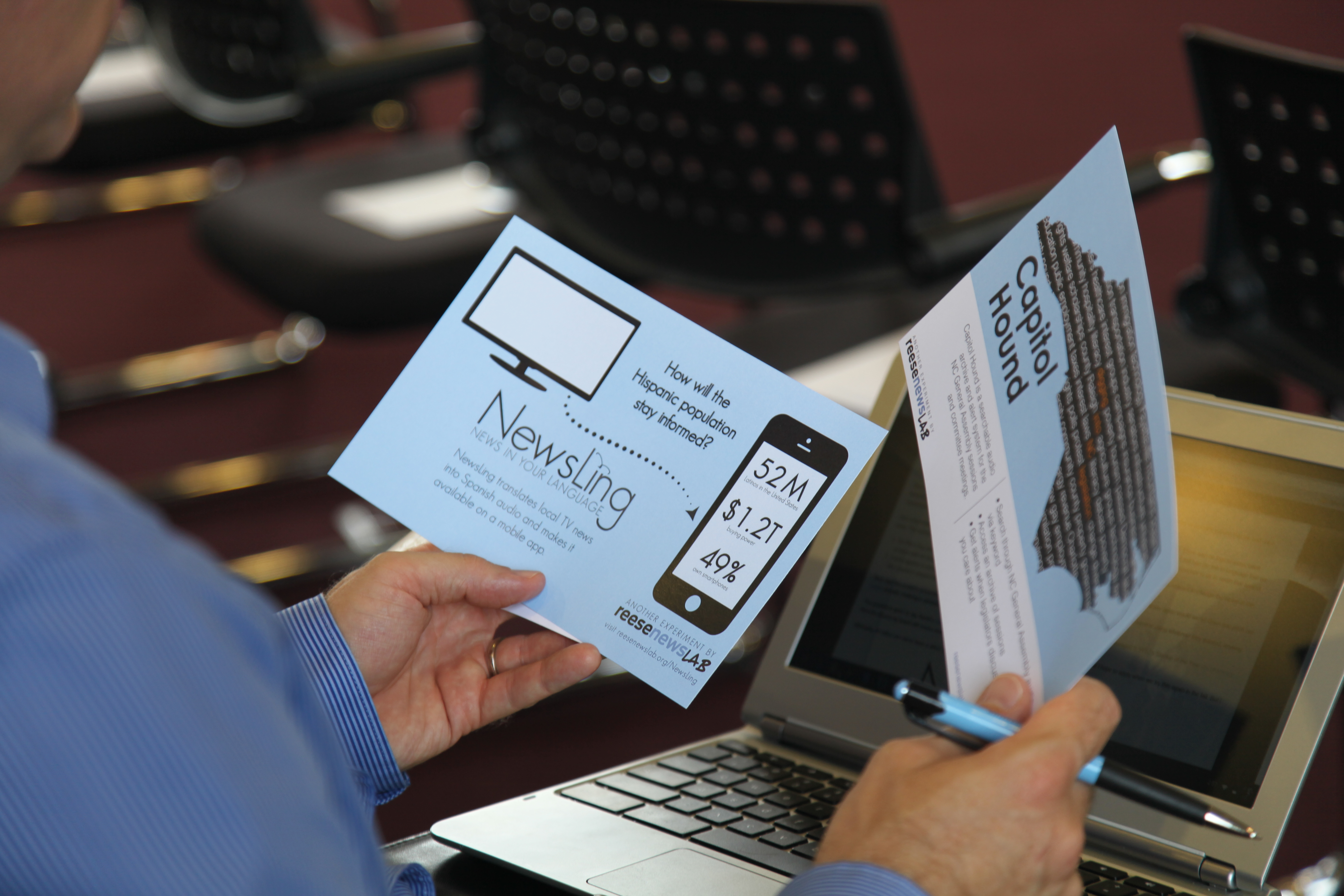 Capitol Hound is a searchable audio index and alert system for N.C. General Assembly sessions and committee meetings, and NewsLing provides a mobile platform and human translators to news broadcasters so that they can make Spanish-language audio translations of news broadcasts available.

With Jeff Bezos’ groundbreaking purchase of the Washington Post, many media analysts are speculating about the ways in which he might bring the Post into the digital age. Experts on the “Diane Rehm Show” noted that there are many challenges to successful implementation of a digital media strategy, including questions of monetization and infrastructure.

For the past 12 weeks, Reese News Lab staff has been answering these questions, developing two ideas for products that use technology to address pressing needs in the journalism industry. On August 6, the two teams pitched their ideas to a diverse audience of investors, academics and representatives of broadcast and print media organizations.

"We may not be the Jeff Bezos of the world, but we can dream about it -- we can think about what might actually happen, and show what's possible." -John Clark, executive director at Reese News Lab

Developing an idea from start to finish

“The idea was never to stop at only what was immediately feasible,” Nikki Mandell, a member of the Capitol Hound team, told the audience. “We wanted to do all our research to see what was possible.”

A wall of brainstorms at Reese News Lab.

The rest of the summer, according to Mandell, involved “an evolving calendar” of prototypes, user testing, business plans and financial models. The students came from diverse majors and backgrounds, with expertise in programming and multimedia, information science, business and journalism on both teams. These varying perspectives helped the teams to ask questions about all aspects of both potential products, and conduct research accordingly in preparation for final pitches.

“Instead of making every decision, we want to give all of the information … to the public and show it to everybody else,” Mandell said. “Here’s what we have, this is what we recommend, these would be the best steps to move forward.”

“Not being able to access the same information everyone else can is debilitating for communities that don’t speak the mainstream language,” said Azul Zapata of the NewsLing team. “We’re creating a bridge between necessary information and the people that truly want it.”

This bridge is NewsLing, or “News in your Language,” a translation service for broadcasters that would allow them to pay to have newscasts translated and recorded into Spanish. Under this business model, Spanish-speaking individuals would download an app to their mobile devices that would play back the Spanish audio in real time with the television broadcast.

Jodi Glusco, content director at WRAL News, said that NewsLing has potential for both breaking news and on-demand applications.

“I was really impressed with how it turned out. I would like to see more demo of the mobile app,” Lusco said. “I love the idea of the different time zones and making it scalable.”

Zapata stressed the value that NewsLing could bring to broadcasters in helping them understand who their Spanish-speaking viewers are and what kind of content they want to see.

“It’s very exciting to be able to add diversity to your viewership,” Zapata said. “You become more aware of how your stories have a cultural context, how your stories affect a very specific group of people.”

Capitol Hound: lighting up the legislature

As NewsLing set its sights on the national Spanish-speaking population, the Capitol Hound project focused on a problem close to home.

The North Carolina legislature has found itself in the spotlight again and again during this legislative session, consistently criticized for what seem to be attempts to pass controversial bills “under the table.” The Republican-controlled Congress has come under fire for scheduling last-minute sessions, attaching language about issues like abortion and voter ID rules as riders on unrelated bills and failing to give interested parties advance notice of potential legislation.

Capitol Hound seeks to light up the discussions that happen behind closed doors at the legislature, offering a service for lobbyists, lawyers, and other interested parties to keep up with discussions in legislative general sessions and committee meetings. Currently, the audio for these sessions is not transcribed or made easily accessible — the Capitol Hound system would create a searchable database of transcribed audio, time-stamped for easy access.

“It’s a service that makes the process of transcribing important audio easier and faster … for a relatively low cost,” said team member Daniel Pshock. “That audio in this case happens to be the N.C. General Assembly. It could be used for a lot of other things.”

Capitol Hound users could also sign up to receive alerts for particular words — getting an email each time “abortion” is mentioned, for example — allowing interested parties to stay on top of pertinent discussions. Pshock notes that by allowing users to know exactly when in an audio recording mentions occur, Capitol Hound makes it easy to listen to audio before and after in order to understand the context in which a bill was mentioned. The digital nature of the system would also allow the user to be provided extra information like links to full text bills.

“In the audio files, they don’t explain bills in detail. [Users] wanted links to the N.C. General Assembly website, links to the bill itself,” Pshock said. “People want context.”

N.C. Senator Ellie Kinnaird, a lawyer by training, asked the presenters several questions about potential liability issues related to transcription. She said that Capitol Hound would be especially useful to make sure that the public was aware of local bills that “all of a sudden” become major issues, such as the closing of two N.C. airports announced this session.

“For me, this is a great idea,” Kinnaird said. “As the news media have less and less to spend on … this would alert them.”

As the two pitches ended, the conversation continued in the audience. Attendees representing all different spheres in the journalism and media universe chatted with team members, offering suggestions and ideas for development, and discussing the question on everyone’s mind: Could these ideas really work?

John Clark, the executive director at Reese News Lab, doesn’t have any doubts.

“These products are viable … a need has been identified with each,” Clark said. “They’ve taken some risk out … It’s not a shot in the dark. There’s a nice road map for anyone who would want to pursue these ideas.”

These projects will remain where they are as the school year begins, when in the fall Reese News Lab staff will start the brainstorming, research and development process all over again with fresh ideas. Although the material will be new, the “try it and see” philosophy of the lab and sense of discovery will remain constant as the students continue to push the boundaries of what might be achieved at the intersection of journalism and business.

“I’m excited to see what another group of students will do. It’s fun to think of these ideas,” Clark said. “We may not be the Jeff Bezos of the world, but we can dream about it — we can think about what might actually happen, and show what’s possible.”