Mediatwits #92: Journalism, Free Speech Under Attack in the Surveillance State 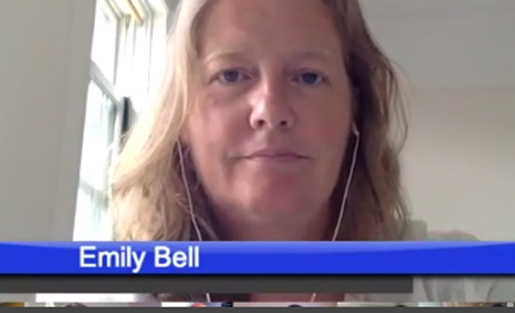 Emily Bell, director for the Tow Center and former Guardian editor, joined us as a special guest for this week's podcast

How can journalists fight the war on journalism, both in the U.S. and abroad? As governments hunt down whistleblowers, leakers and journalists alike, many reporters are worried they now work in a world that criminalizes their profession, calling this a “DEFCON 2 journalism event.” Most recently, Chelsea (formerly known as Bradley) Manning, the source of the Wikileaks disclosures three years ago was sentenced to 35 years in prison, and David Miranda was detained in Heathrow airport for nine hours while helping his partner, the Guardian’s Glenn Greenwald, obtain documents related to NSA spying. How worried should journalists be when reporting on political, international affairs or national security? How should journalists work in the surveillance state and continue to report? This week’s Mediatwits will feature Tow Center director and former Guardian editor Emily Bell, NYU J-school professor and PressThink blogger Jay Rosen and Free Press’ Josh Stearns. MediaShift’s Mark Glaser hosts, along with Ana Marie Cox from The Guardian, Mónica Guzmán from the Seattle Times and GeekWire and Andrew Lih from American University.

"As governments hunt down whistleblowers, leakers and journalists alike, many reporters are worried they now work in a world that criminalizes their profession.”
ADVERTISEMENT

Emily Bell is the director of the Tow Center for Digital Journalism at the Columbia Journalism School. Previously, she was director of digital content for Britain’s Guardian News and Media from 2006 to 2010 and editor-in-chief of Guardian Unlimited from 2001 to 2006. Under Bell, the Guardian received numerous awards, including the Webby Award for a newspaper website in 2005, 2006, 2007 and 2009, and British Press Awards for Website of the Year in 2006, 2008 and 2009. Bell first joined the Observer newspaper, which became part of Guardian News and Media, in 1990, as a business reporter specializing in media business, marketing and technology. Bell is a leading media commentator in the U.K., writing about broadcasting and media policy issues. She is a 1987 graduate of Christ Church, Oxford University, where she earned a master’s degree in jurisprudence.

Jay Rosen has been on the faculty of New York University’s Arthur L. Carter Journalism Institute since 1986, and from 1999 to 2005 he served as chair of the department. Rosen is the author of PressThink, a blog about journalism and its ordeals. He also blogs at the Huffington Post. In July 2006 he announced the debut NewAssignment.Net, his experimental site for pro-am, open source reporting projects. The first one was called Assignment Zero, a collaboration with Wired.com. A second project is OfftheBus.Net with the Huffington Post. Rosen is also a member of the Wikipedia Advisory Board. He’s the author of “What Are Journalists For?,” which is about the rise of the civic journalism movement. From 1993 to 1997 he was the director of the Project on Public Life and the Press, funded by the Knight Foundation. As a press critic and reviewer, he has published in The Nation, Columbia Journalism Review, the Chronicle of Higher Education, The New York Times, the Washington Post, the Los Angeles Times, Newsday, Salon.com, TomPaine.com and Poynter.org.

1. Journalists and sources targeted in leak investigations, shield law could be weak

Earlier this summer, the Associated Press revealed that DOJ had obtained phone records of numerous AP reporters with the hope of prosecuting a leaker. Fox News reporter James Rosen was named a “an aider, abettor and/or co-conspirator” in a leak investigation, and DOJ is compelling New York Times reporter James Risen to testify against a source in a similar investigation. Chelsea (formerly known as Bradley) Manning was sentenced to 35 years in prison for releasing classified information to WikiLeaks. The ACLU and other free speech advocates have criticized the government for detaining the whistleblower, somebody who helped shed light on the war in Iraq and international governmental affairs. Meanwhile, NSA leaker Edward Snowden is still in Russia avoiding prosecution by the U.S., and WikiLeaks founder Julian Assange is in the Ecuadorian embassy in London avoiding extradition to Sweden. In response to journalists’ outcry, President Barack Obama has promised a new national shield law to protect reporters. However, the protection would exclude bloggers, who “commit acts of journalism” too. It would also create loopholes for national security reporting probes, doing little to prevent investigations like those mentioned. There are ways to improve the shield law, but will the U.S. government listen?

As the primary publisher of disclosures of NSA spying practices (which pose their own First Amendment concerns), the Guardian has been under pressure by the U.K. government to stop printing stories based on documents provided by contractor Edward Snowden. Some of their tactics include destroying the British paper’s hard drives and detaining Guardian journalist Glenn Greenwald’s partner David Miranda, both of which carried evidence of the extent of NSA surveillance.

A little over two months ago I was contacted by a very senior government official claiming to represent the views of the prime minister. There followed two meetings in which he demanded the return or destruction of all the material we were working on. The tone was steely, if cordial, but there was an implicit threat that others within government and Whitehall favored a far more draconian approach. The mood toughened just over a month ago, when I received a phone call from the center of government telling me: “You’ve had your fun. Now we want the stuff back.”

Not all journalists seem as bothered by the pursuit of Edward Snowden or of talks of criminalization of journalism. Jeffrey Toobin of CNN and the New Yorker was criticized by the press for referring to Miranda as a “drug mule” and calling for Snowden’s arrest, and CNN’s Piers Morgan also criticized Snowden’s actions. Before that, NBC’s “Meet the Press” host David Gregory was attacked for asking Greenwald if he should be charged with espionage for his reporting. Michael Grunwald, a TIME national correspondent tweeted that he couldn’t “wait to write a defense of the drone strike that takes out Julian Assange.”