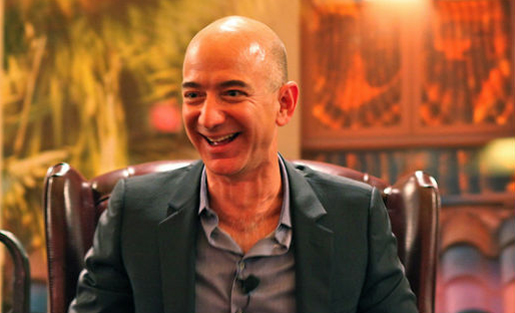 Will Jeff Bezos have the last laugh after buying the Washington Post? (Photo of Jeff Bezos by Steve Jurvetson via Flickr Creative Commons)

It’s a scary but exciting world for newspaper owners right now, especially if they’re in a selling mood. Jeff Bezos, the founder and CEO of Amazon, bought the Washington Post last week (while our podcast was on vacation — great timing!), and Red Sox owner John Henry bought the Boston Globe before that. As newspapers continue to struggle to raise advertising or subscription revenue, will the journalism industry be aided or hindered when it’s owned by billionaires? Special guests Nick Wingfield from the New York Times and Jack Shafer from Reuters join this week’s episode of the Mediatwits. MediaShift’s Mark Glaser hosts, along with Mónica Guzmán from the Seattle Times and GeekWire, Ana Marie Cox from the Guardian and Andrew Lih from American University.

Nick Wingfield has been a Seattle-based technology correspondent for the New York Times since 2011. Before that, he covered technology for 14 years for the Wall Street Journal in Seattle, San Francisco and New York.

Jack Shafer writes a column about the press and politics for Reuters, which he joined in September 2011. Previously, he worked at Slate for 15 years, first as deputy editor and then as the site’s “Press Box” columnist. Before Slate, Shafer spent 11 years editing two alternative weeklies–SF Weekly and Washington City Paper–where he estimates he rewrote, massaged, or merely pressed the button on 500 features. Shafer’s first salaried job in journalism was at Inquiry magazine, where he was the managing editor. His work has been published in the New York Times Magazine, the Times Book Review, the Columbia Journalism Review, the New Republic, BookForum, the op-ed page of the Wall Street Journal, and elsewhere. He has been writing about the press for about 30 years, god save his soul.

Jeff Bezos is known for founding online book retailer Amazon, and now he’s known for buying the august (but failing) Washington Post newspaper and an assortment of other Post Co. newspapers for $250 million in his pocket change. The purchase was a surprise to the journalism industry, which never foresaw the long-standing Graham family ending their 80-year ownership of the Washington Post — at least, not like this. There are concerns for Bezos’s history as a manager, as well as potential conflicts of interest as Amazon continues build political clout. But optimists point to Bezos’s ability to dramatically reinvent business models, propel journalist innovation and make decisions as integral as picking the right publisher.

How has this model of the billionaire-owned paper worked in the past? Can someone like Bezos find the answer for papers to survive?

The Washington Post wasn’t the only major paper sold off recently, with the Boston Globe finding a new owner in Red Sox owner John Henry. Though he has no newspaper or digital innovation chops, the New York Times Company, which previously owned the Globe, said he has “strong local roots and a deep appreciation of the importance of these publications to the Greater Boston community.” Henry bought the Globe along with a number online properties such as Boston.com for $70 million.

Is the New York Times next?

If you ask Arthur Sulzberger Jr., publisher and chairman of the New York Times, “the answer to that is no.” Citing growth in digital subscriptions and online innovation, the Times’ management say there’s no need to sell the paper. That doesn’t stop questions about the organization’s overall health, especially since the company just sold the Globe. Reuter’s Jack Shafer, National Memo’s David Clay Johnson and others have suggested New York City Mayor Michael Bloomberg could purchase the Times to bolster his political clout after leaving office (Shafer less enthusiastically than Johnson).

Poll: Which Tech Billionaire Will Buy the Next Newspaper by Mark Glaser

Special Guests’ Coverage of the Topic

The next publisher of the Washington Post is… by Jack Shafer