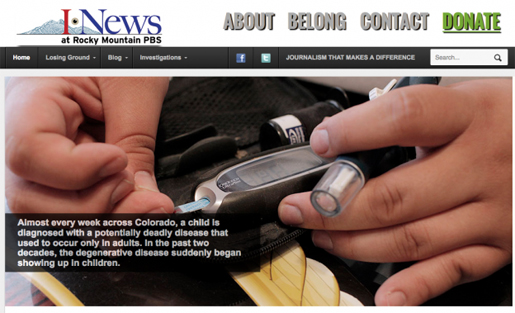 Earlier this year, Rocky Mountain PBS merged with the public-service journalism site I-News. Doug Price, RMPBS president and CEO said, "We saw a void in the market and we think we can increase our memberships by filling that void, and we're satisfied that we can do it without financial difficulty."

In Denver, the statewide public television network had no newsroom until it merged with an investigative news site that built one from scratch.

In St. Louis, The Beacon has been working to add its 14 reporters to the public radio station’s 12 news people for a combined newsroom with the firepower of 26 journalists.

“I am trying to raise the profile of non-profit, independent journalism. I am saying this is valuable and it should happen." -Paul Maassen

In the Pacific Northwest, Oregon Public Broadcasting is building a statewide news network, shooting for some 50 partners who will share and use one another’s stories, and in New Orleans, WWNO public radio’s first news director is marshaling a local news report built from new startups rather than new hires.

Public broadcasters have always done partnerships, but in the last year these and other public-media outlets have begun piecing together the infrastructure for local-news reports that will offer more than cutaways in “Morning Edition” and “All Things Considered.” As a result, they are airing more investigative and enterprise journalism than ever before.

Unfettered by the competitive pressures at commercial media, leveraging the trust in their brands, they are employing creative approaches: They are tying the knot in extraordinary mergers, divvying up the cost of reporters, sharing newsroom space and even engaging in joint fundraising with their partners.

In our new report, “News Chops: Beefing up the Journalism in Local Public Broadcasting,” J-Lab explores nine efforts, large and small, that have occurred just within the last year. They include the creation of statewide news cooperatives in Oregon, Connecticut and New Jersey, building newsrooms from scratch in Denver and New Orleans, merging two existing newsrooms in St. Louis, and adding reporting oomph in San Diego, Salt Lake City and western North Carolina. One outcome was clear: Increasingly public broadcasters are stepping up to become critical linchpins for state and metro-wide news networks.

In a recurring pattern, the broadcasters are partnering with independent news startups that have proven their merit. Said John Dankosky, news director of Connecticut’s WNPR, a partner with the Connecticut Mirror: “They’re giving us content that we wouldn’t be able to get, and we’re giving them exposure.”

That kind of visibility and validation juices many of the alliances. “We see our role in this not as just a content developer, but as a catalyst,” said Paul Maassen, news director at WWNO, now partnering with The Lens, an investigative site, and NolaVie, an arts and culture site, in New Orleans. “I am trying to raise the profile of non-profit, independent journalism. I am saying this is valuable and it should happen.”

In return, some of the startups help the broadcasters amp up their accountability journalism. San Diego’s KPBS shares its newsroom with inewsource, and the 4-year-old startup teaches others how to do FOIA requests and run data in Excel spreadsheets. “We’re trying to get our reporters a little more accountability-driven,” said Suzanne Marmion, the station’s director of news and editorial strategy.

How Does Public Media Position Itself for the Future?

Doug Price is CEO of Rocky Mountain PBS, which merged with I-News.

Strategic thinking plays a role as well. How do public media stations sustain themselves in the long run if future listeners opt to go directly to NPR for national stories and to, say, Pandora for music? “They have to focus on local [news],” said Scott Karp, whose Publish2 platform is used by some of the public broadcasters for content sharing.

In Oregon, with The Oregonian pulling back on its statewide reporting and its daily delivery and with AP’s state presence diminishing, OPB realized it was the last statewide media outlet. News director Morgan Holm said a colleague nudged him to step up, “so I told my boss, we’d better figure out a way to work with newspapers.” OPB is now corralling all kinds of media partners to contribute and use one another’s content. OPB will turn it into a daily news feed.

Tearing down walls to reach out to news partners vs. erecting paywalls in front of the newspaper journalism seems to play well with supporters of public media. When St. Louis Public Radio and the St. Louis Beacon calculated the costs of fully merging their newsrooms, they figured on a $3 million shortfall over the first five years. “We already have $2.5 million of that pledged,” said Tim Eby, the station’s general manager.

Likewise, in undertaking its merger earlier this year, Rocky Mountain PBS was not worried about shouldering the half-million-dollar-a-year tab for the public-service journalism site I-News‘ operations. “We have a strategic vision around pertinence,” said Doug Price, RMPBS president and CEO. “We saw a void in the market and we think we can increase our memberships by filling that void, and we’re satisfied that we can do it without financial difficulty.”

Margie Freivogel is a founding editor of the St. Louis Beacon, which is trying to merge with St. Louis Public Radio.

As local news ecosystems evolve, priorities evolve as well. Several of the public broadcasters are striving to make local content ubiquitous and give it a long tail for impact. At the same time, website visits are less important to their startup partners than deeper engagement. NolaVie’s founders want its stakeholders to stick around for a four- to five-minute story rather than posting its content on a partner site that wants “people to drop in for just a nano-second” so they can count the traffic, said co-founder Renee Peck.

For many of the communities we examined, there is a pronounced sense of being in the vanguard of change. “If we get it right,” said Margie Freivogel, founding editor of The Beacon, “we have the beginning of a blueprint for how to create a vigorous news organization that serves a region and takes advantage of the assets of public media. I think it’s a very important possibility.”