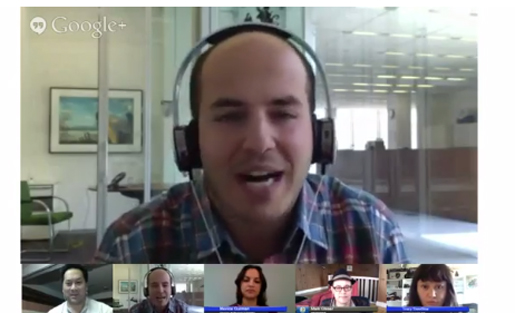 The New York Times' Brian Stelter was a featured guest on this week's podcast focused on the future of TV. Who is he looking at as a possible major player? Intel.

Like most media, the future of television is online. This edition of the Mediatwits, we’ll talk about the prospects for tech upstarts Apple, Google, Intel and Sony, who are trying to push their way into the lucrative TV and entertainment business. Apple is aiming to work with incumbent cable companies, while Google is working against them. Meanwhile, Netflix’s original content has planted it on the same Emmy stage as major television networks and cable channels, winning 14 Emmy Award nominations. Plus, the winner of the bidding for buying Hulu was… Hulu? Hulu didn’t sell itself in the end, probably because it’s worth more than even the generous offers. Special guests Brian Stelter of the New York Times and Tracy Swedlow from the TV of Tomorrow show will parse out the future of online TV viewing and the role of Silicon Valley in Hollywood. MediaShift’s Mark Glaser hosts, along with Mónica Guzmán from the Seattle Times and GeekWire, and Andrew Lih from American University.

You can watch or listen to the podcast right here:

"I don't think [Netflix] is going far enough. They could have owned this space a long time ago... They're not doing hardly anything with social." -Tracy Swedlow
ADVERTISEMENT

Tracy Swedlow is CEO, publisher, and editor-in-chief of InteractiveTV Today [itvt], which was founded in 1998, and is also the executive producer and director of the TV of Tomorrow Show conferences that occur bi-annually in San Francisco (Spring/Summer) and New York City (Fall). Her writing has appeared in many leading newspapers and trade publications, including the New York Times, the San Francisco Examiner, PC World, Multimedia World and VR World.

In years to come, we might consider Apple, Google and other tech behemoths as the kings of TV, and think a lot less of Comcast, Time Warner Cable and other distributors. Along with upstarts Netflix and Amazon, Intel and Sony are prepping TV services for the fall, and more news is leaking out about efforts by Apple and Google. This is Google’s second go-round for a TV service, this time trying to license content and charge for it, according to a report in the WSJ. Meanwhile, Apple is working more closely with cable providers for its service, which would include ways for cable subscribers to get content without a set-top box, according to NYT’s Brian Stelter. Plus, Apple would like to include an ad-skipping service, but the twist is that they would pay media companies when premium users skip ads.

Which tech companies have the best prospects? Can Google get this right, and will Apple’s attempts to work within the system help? Who will be left standing in TV services when all is said and done?

Netflix became the first streaming TV service to grab major Emmy nominations with 14 total, including best drama for “House of Cards.” Of course, its cable rival HBO garnered 108! The old saying is true: Content is king. Just as HBO in the early 2000’s burst onto the broadcasting excellence scene, Netflix’s investment in shows like “House of Cards” and “Arrest Development” have garnered the streaming service a spot right next to cable and network TV channels. Seeing big stars on small screens could have been a draw for both the audience and critics, especially since “House of Cards,” with Kevin Spacey and Robin Wright, nabbed nominations for best actor, actress and best drama (“Arrested Development”’s Jason Bateman also got a nod for best actor in a comedy). And Netflix seems to have no signs of letting up, recently releasing the first season of “Orange Is the New Black.”

Has Netflix arrived as a content studio? What can old-school channels learn from Netflix, and vice-versa?

Hulu could have been sold for upwards of $1 billion. But at the last minute, Fox and Disney pulled the plug. There are competing stories as to why. Either Disney changed its mind at the last minute to keep Hulu, or the money being offered was simply too low to be acceptable. Either way, it seems that Fox and Disney place a lot of value in the streaming service, perhaps more than what some of the buyers were offering. As Fox, Disney, Yahoo and major television networks look to get into the online streaming market, News Corp.’s Rupert Murdoch and Disney’s Bob Iger think Hulu’s future is strong, even if they’re not sure what exactly it will grow to be.

Where does Hulu fit in the online television market? What does it have to offer that helps it compete, and what’s holding it back? Will the onslaught of ads on its premium service turn away subscribers?

The ‘Sharknado’ phenomenon: how did it happen? (Business Week)