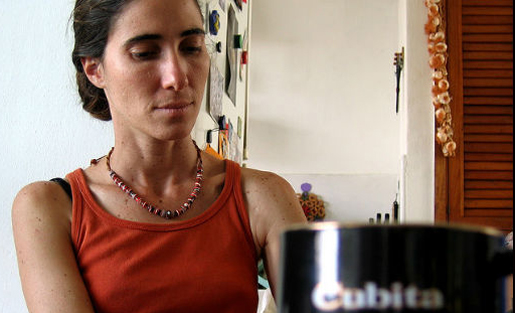 Yoani Sanchez, a Cuban blogger for Generation Y, in Havana. Photo by by Andre Deak via Flickr, using a Creative Commons license.

For the past half dozen years, dissidents such as Yoani Sanchez and her blog “Generation Y” have opened the political debate like no other time since the Castros came to power in Cuba.

But Cuba’s dissident movement has deep roots, with many working in relative obscurity for decades.

"It is clear that the government controls the TV and newspaper and radio and the way that we have to evade [that is] with the resources we have in new media.” -Antonio Rodiles

That’s all changing with modern technology.

With the global expansion of the Internet, dissidents have been able to step into the international limelight, using blogs and social media to generate vast networks of supporters.

Websites such as Voces Cubanas and The Havana Times allow dissidents to critique the government, offer alternative perspectives and connect with other civil society groups.

Although only 5 percent of Cubans have access to the Internet, dissidents have used innovative methods to spread their messages.

“The Cuban who is writing the blog cannot easily or inexpensively access the Internet to update the blog,” said Ted Henken, professor of Latino Studies at Baruch College of New York, “so they have a partner abroad who voluntarily helps them do that … So for example Havana Times … the editor lives in Managua, Nicaragua, the webmaster lives in Japan and all of the writers live in Havana. They harness people around the world who translate, who administer.”

Creative ways to bypass the government

They often download the blogs and secretly share them on flash drives to allow Cubans on the island to access these materials. This gives dissidents the power of the Internet even when they cannot get online.

Henken explains that the Internet has also enabled activists to form stronger connections with Cubans living in the diaspora. Now, when the government attempts to suppress dissidents, a global audience stands united to critique those actions.

Henken said the growing unity within Cuba’s civil society and its connections to the diaspora could create significant political leverage in years to come.

The leverage will not fall into the hands of the Cuban people automatically, however.

Rodiles’s organization, “Estado de Sats,” strives to create public spaces where Cubans can discuss reform and build a wider network of support. The organization has filmed about 70 panel discussions and distributed them on DVD to generate conversation.

“The strategy is to try to create bridges between all different sectors of society, between the activists and artists and lawyers and all the actors,” Rodiles said. “We are trying to create a nexus of support and collaboration … If we do not have a civil society, we are not going to develop a democracy. We are going to develop an unpredictable system.”

Rodiles spearheads a campaign called “Por Otra Cuba,” or “For Another Cuba.” The initiative aims to pressure the Castro regime to ratify the two United Nations’ agreements for civil and political rights signed in 2008. Already, “Por Otra Cuba” has gathered more than 4,000 digital signatures.

But Rodiles said this work is more difficult than it sounds. Last year, the government detained him for 19 days on charges of resisting arrest.

He says the government uses these forms of intimidation to stifle the dissident movement.

“The Cuban Government is going to try to use violence to stop us — in fact they have been doing this to social actors for years to send a clear message to the rest of society,” Rodiles said.

Rodiles agrees that the Internet gives activists the opportunity to speak from a new platform, one that the government cannot easily suppress.

Although the Castro regime has begun to spread propaganda online, he says dissidents have widely used social media to their advantage.

“I think that social media need to be used to change the reality,” Rodiles said. “It is clear that the government controls the TV and newspaper and radio and the way that we have to evade with the resources we have in new media.”

Some scholars caution activists against overestimating the power of the Internet.

“Internet utopianism” refers to the idea that cyberspace and new media will bring unprecedented freedom to the world, particularly to societies governed by repressive regimes.

Mary Long of the University of Colorado says this line of thinking reduces new media into too narrow of a political reform.

“I see something different,” Long said. “I do see community being created and connections happening, but they are not going to fulfill the old political vision of creating a place where we are all equal and valued.”

She said blogs offer unprecedented opportunities for global discussions and that social media allow citizens to organize in new ways.

Despite these trends, she does not believe Cuba’s use of new media will translate directly into political reform apart from traditional forms of activism.

For now, the future impact of the Internet on Cuban society remains speculative.

As a freelance writer and human rights advocate, Curt Devine leverages media to give a voice to the voiceless. He is currently pursuing a master’s in international media at American University in Washington D.C.

This story was originally broadcast on Latin Pulse.

“Latin Pulse” is a weekly program that reviews news from Latin America and analyzes politics, culture, and important issues throughout the region. This weekly podcast is distributed by Link TV, iTunes, and SoundCloud, among other platforms.  “Latin Pulse” reaches more than 100,000 online subscribers weekly. The program is sponsored by the American University Center for Latin American & Latino Studies and is produced at the university’s School of Communication.