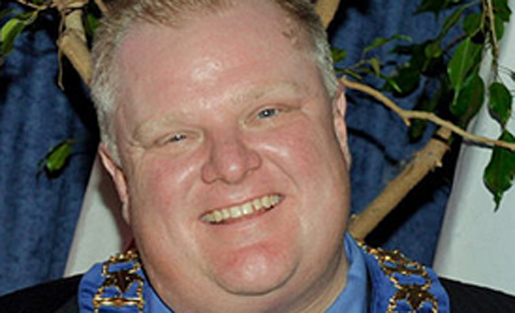 Toronto mayor Rob Ford is at the center of a crowdfunding campaign by Gawker to get a video that allegedly shows him smoking crack. Image courtesy of MTLskyline on Wikimedia Commons and used here under the Creative Commons license.

As recently as five years ago the story by Toronto Star reporters that they had seen a video purporting to show the city’s Mayor Rob Ford smoking crack with a drug gang would have likely sold a lot of newspapers for a few weeks, and been followed by a protracted trial and judicial process. Published in May 2013, those claims have resulted in a media-led public campaign to gain possession of the evidence from the gang itself. To say Gawker‘s cheekily titled Crackstarter crowdfunding campaign muddies the waters of judicial inquiry is an understatement — some suggest that the case is an example of crowdfunding spinning out of control. But is this a story about crowdfunding, or journalism?

On the one hand, this isn’t a story about crowdfunding at all: it’s a story about checkbook journalism. What newspapers across the world have done in the past, and continue to do to get (salacious) stories is now being done out in the open. It’s not a practice that edifies anyone: What this campaign will do, if successful, is give money to a criminal gang.

It’s for that reason that I find the liberal use of the word “transparency” in coverage of this story pretty uncomfortable: If Ford is exposed as guilty by the video, that exposure will not happen through a transparent process — it will happen as a result of a back-room deal involving a pile of cash. We should reflect on whether that’s the role we would like the press to play in criminal cases. If the video does make it to Gawker, that outcome is unlikely to help the judicial process, and will probably damage it. Responsible media outlets recognize that, because it’s a lesson the media has learned many times over in the past, and which the law in many countries protects — all long before the days of online crowdfunding.

On the other hand, this is a story that is complicated by crowdfunding, for two reasons.

Firstly, because the fundraising is being done in public, with a specific target in mind, it amounts to a ransom note with a big opportunity for brinkmanship attached to it. With Gawker lobbying to reach their $200,000 target, the gang allegedly holding the video has little reason to accept a lower offer than that. It leaves little room for negotiation by investigators who may be trying to obtain evidence without pulling out their checkbooks. The urgency and goal setting that make many crowdfunding campaigns attractive and capable of precipitating action feel awkward and highly problematic when employed for these reasons.

Let’s also note that crowdfunding campaigns are increasingly prone to being “overfunded,” sometimes passing their target several times over. Several campaign organizers I’ve spoken to have suggested that this is an outcome they strategically design for, setting the fundraising goal lower to ensure that a campaign reaches its target, enjoys the publicity associated with that success, and can then market for further funds by promising additional rewards. There’s nothing to suggest yet that Gawker is considering that path, but the gang may have an opportunity to hold out for more.

Secondly, the ethics of giving to a gang who may or may not deliver something authentic, let alone of some value to the public interest or the judicial process raises the troublesome “F” word for crowdfunding — fulfillment. IndieGoGo currently offers no mechanism for authenticating the products and campaigns that use its platform to fundraise. This is a tough problem to resolve, but it’s also an important one. Specialized crowdfunding platforms are trying. The recently launched Crowdsupply, aimed at small-scale makers, offers a suite of services around manufacturing and fulfillment to ensure that projects on the site get made on time and to spec. In the civic crowdfunding space, Spacehive worked with Deloitte to design a contractual framework for the completion of projects in the the built environment. We’ve yet to see a severe test of either framework, but they are valuable first steps.

The fact that the Crackstarter campaign lacks both clarity over what will be delivered (a video that proves Ford’s guilt or simply a video that may or may not feature Ford in it) and any mechanism for redress is troubling. Perhaps Gawker is simply acting as a provocateur that presumes it won’t have to deliver: MIT’s Ethan Zuckerman predicts Ford will resign before the video is released. Either way, the accountability gap this case reveals suggests that the crowdfunding industry needs to establish much more robust practices for fulfillment.

The Ford case raises serious questions about what crowdfunding is for — or what it should be used for. We’ve seen the industry expand rapidly from art to consumer products to parks and buildings, and campaigns may be the next wave, bringing their generations-old fundraising practices online. (As Tom Lee pointed out, Ron Paul has been very successful at rapid fundraising campaigns — so-called “moneybombs” — since 2007.)

Crowdfunding projects are likely to become more contentious in the future, and that represents a big challenge for platform owners, who need to be very secure in what they’re selling. It has been mentioned in several accounts that IndieGoGo appears to have a more relaxed attitude than Kickstarter to the groups that can use its service. Last month it was reported that IndieGoGo currently hosts a campaign by a radical anti-Islam group, for instance, a decision the company defended. IndieGoGo may be choosing a more liberal stance in order to be compete in a tough market, but its appetite for controversy will surely be tested as more cases like Crackstarter emerge.

By pre-selling Ford’s presumed guilt, the Crackstarter campaign feels like checkbook journalism spun out of control. Is this the first of many trial-by-campaign crowdfunding projects? I hope not, but I suspect I’m wrong.

This post originally appeared on the MIT Center for Civic Media blog and on rodrigodavies.com