The Challenges of Co-Creating Magazine Journalism with Reader Input 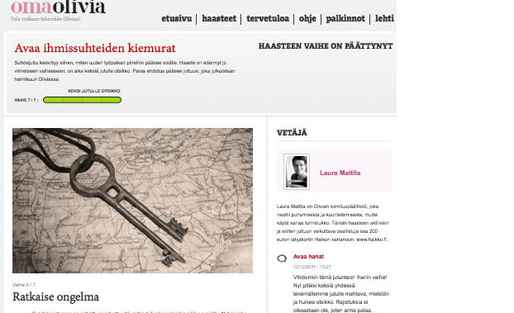 The user interface of Olivia's co-creation platform. The journalist (on the right bar) posts updates to the microblog, and engages in conversations with the readers.

What happens when a consumer magazine co-creates a magazine issue with their readers?

Co-creation is an age-old customer-centric marking approach, a collaborative process of creating something of mutual value between a producer and a consumer. Today, it is spreading into magazine publishing as a new form of open journalism by bringing together reporters and the “crowd” to collaborate on story production.

"For meaningful co-creation and reader collaboration, journalists have to be actively present on the platform and to engage users."

Co-creation and journalism as an open process

Global media publisher Bonner Group is experimenting with co-creation at Olivia, an established women’s magazine in Finland with a readership of about 130,000.

The story co-creation process is structured as a “challenge.” Each challenge is divided into phases following standard journalistic process of finding a story topic, angle, and interviewees; sharing experiences and expertise as content for the stories; and ideating the scene for pictures. During this early editorial stage, the magazine staff writers are in constant dialogue with the readers.

With the crowd’s input, journalists then write the stories. Meanwhile, the crowd can follow the story production through a progress bar on the collaboration site. Since the launch, co-creation has remained a constantly used tool at the magazine.

Magazines are typically designed for the “ideal reader,” or a highly desired consumer. The magazine tailors its story topics to match the ideal reader’s imagined needs and preferences. In the case of Olivia, the magazine is designed for an educated, urban professional woman in her late twenties to early forties who pays attention to ethical consumption.

A case study about co-creation in the Olivia magazine shows how co-creation creates almost like a shocking realization for journalists when they interact with very different “real readers” in such an intensive online collaboration, instead of the imagined “ideal reader.” This caused journalists to doubt that the participants are the right crowd—the audience of “ideal readers.”

This conflict led the journalists to de-value the collaborators’ input and to worry that the magazine would “be worse and more boring” if they followed the readers’ wishes. As a result, the crowd was excluded from the journalistic process, and the readers were pushed to the periphery of the editorial process due to the knowledge asymmetry. The reader’s input collided with the magazine’s concept and purpose, and the journalists perceived the input as something that would “break the concept.” The “open” led into a crisis in the co-creation contract: The crowd wants something other than what the magazine concept allows.

In the beginning of the co-creation process, many journalists don’t actively participate in the discussions on the online platform. The nature of constant online engagement with readers is new, and they find it hard to fit it into their regular newsroom workflow. Concerns about not having the right tone in their interactions with the readers also causes further strain in an authentic engagement process. The readers react to the journalists’ absence, and ask them to be more present.

When journalists start facilitating the interactions by posing questions and encouraging good responses, they begin to identify more value in readers’ submissions. For meaningful co-creation and reader collaboration, journalists have to be actively present on the platform and to engage users.

Readers do not expect immense highlighting

Another fear expressed by journalists is that co-creation imparts only an illusion of participation, and that readers will be angry if their input does not appear in the stories.

The Olivia polling results show the readers’ support for story topics and other choices.

The chance to impact the magazine’s editorial decisions is a “plausible promise” in co-creation, which, if not kept, will let the participants down, harming the reader-relationship. This concern leads to forcing the readers’ input into the stories, resulting in lower-quality journalism, which contradicts the magazine’s style.

Ironically, however, the readers do not expect to be highlighted in the stories. They simply want to be listened to and to have the journalists synthesize their input so it is woven into the editorial decisions for crafting the feature story.

For readers, the online co-creation is an experience, which creates value to the readers by itself, and the print stories are another, somewhat separate experience. The print magazine keeps its role as a sense-maker and storyteller, in which the professional, familiar narrative voice of the magazine still talks to the readers, rather than other readers to a large extent. These two worlds interact, and contribute to each other; thus, a bridge between the online and print products is created. Despite the disappointment in the journalistic quality of the stories, co-creation created value both to readers and journalists.

After the co-creation process, the readers describe the magazine as “closer” to them than before, stating that the magazine is theirs and it belongs to them, as this reader in the study describes:

I feel like I belong to the magazine somehow. Now that I have participated and shared my thoughts, it feels like it is my own magazine more than any other magazine.

Some readers renewed their subscriptions to the magazine and one who had never subscribed did so for the first time. Similarly, the fact they have been part of the process makes the readers anticipate the magazine and more eager to read it. The readers are delighted to see their input and their names mentioned in the stories. They share the news about their name appearing in the magazine on social media.

Readers feel a sense of closeness to the magazine that listens to their wishes, comments, and perspectives, rather than addressing an ideal, imaginary persona. The readers also perceive the other readers’ input as giving depth and credibility to the story, as one describes:

The beauty story feels deeper, as the story tells how the matter really is. It is more
honest … there is ordinary people’s input there. One can believe in the story, as it is
not fake or some sort of advertising gimmick.

Crowdsourcing is easier than co-creation

Co-created stories take longer to produce than traditional stories. The open process appears fragmented, and can feel like “compiling a puzzle,” as one journalist described. The process-like nature of co-creation is also challenging for journalism, because it requires reconfiguration of the conventional workflow, a strong presence in the online interactions, a need to curate the dialogue with readers, and constant iteration of the process.

The most challenging stories were multi-page feature stories, which were co-created in up to seven stages. The one-stage challenges, in which the readers were asked to conduct simple tasks, such as submitting a list of their favorite songs, inventing a new word, and sharing the name of their favorite book. These one-stage challenges are crowdsourcing, not co-creation, as they are one-time shots, calling for a defined piece of content rather than a process with a dialogue. The crowdsourced information is more easily integrated into the magazine, as they are short pieces comprising a couple of sentences, and can be published with little to no editing.

Iterating the concept based on co-creation

Toward the end of the process, the magazine staff began to perceive the online community as a huge focus group from which they can better sense the readers’ perceptions and needs. Journalists also begin to perceive value in the readers’ input, and describe the co-creation platform as “a storage of ideas.” Co-creation revealed needs to develop the concept. To cite one example, the readers’ strong need for stories about work life was recognized.

As a result of co-creation, the construct of the ideal reader moves closer to the real reader, while remaining in the framework of the magazine concept. In the co-creation process, the reader–magazine relationship is redefined in a constant interaction with the readers, the journalists, and the online community.

Co-creation creates a conundrum for traditional magazine journalism: How to create a dreamworld for the readers, yet stay connected to their realities, which are now revealed by co-creation. A journalist describes the balance between communicating dreams and the readers’ realities after the co-creation process:

“We can be further away in the level of ideas, but when portraying products closer to readers, keep them better in mind.”

Co-creation and the future of digital journalism

The study gives magazine publishers a pathway in their exploration of the digital future with some cautions: Given the findings about reader loyalty impact, online engagement can create great value to digital journalism. However, co-creation is a laborious tool and requires organizational changes.

Yet most of these challenges to journalistic norms and practices can be addressed by iterating the co-creation process based on the lessons learned in the first experiment. The Olivia magazine has already done that, and co-creation continues to be used by the magazine. The readers’ input has been integrated into the stories and the journalists have increased their presence in the co-creation process.

As readership is in decline, for magazines and newspapers alike, the print industry needs to find feasible ways to reinvent itself. Building co-creation communities and finding new tools to engage with readers is an essential part of exploring that future.

The full study is accessible here, or ping the author for a copy, or check this Scribd account.

Tanja Aitamurto is a visiting researcher at the Program on Liberation Technology at the Center on Democracy, Development and the Rule of Law at Stanford University. She examines how collective intelligence, whether gathered by crowdsourcing, co-creation or open innovation, impacts journalism, public policy making and design process. Related to her studies, she advises the Government and the Parliament of Finland about Open Government principles, for example about how open data and crowdsourcing can serve democratic processes. More about Tanja’s work at www.tanjaaitamurto.com