Poll: What Will Happen to Tumblr? 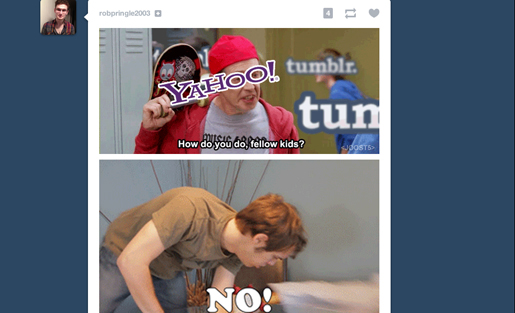 Sentiment on Tumblr is decidedly mixed to negative when it comes to Yahoo buying the service.

The big news of the week is that mature Internet company Yahoo bought less mature Internet company Tumblr for $1.1 billion to get access to a ton of younger users but not a whole lot of revenues (yet). Yahoo CEO Marissa Mayer is saying all the right things about letting Tumblr be Tumblr and not trying to paste ads in every corner of the gazillions of blogs there. But then just how will she make back that $1.1 billion? It has to come from somewhere. That’s led Tumblr users to create all kinds of GIFs and protests against the buyout — just check out these Tumblrs tagged Yahoo. What do you think will happen to Tumblr? Will it tumble into uncoolness or get much needed parental supervision? If you’re a user, what are you dreading — or looking forward to? Vote in our poll or leave a comment with your extended thoughts.