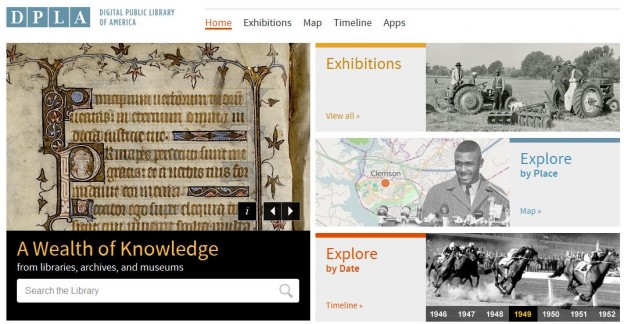 Why would anyone want to attend a party to celebrate the opening of a virtual repository of metadata? A better question might be — what is a virtual repository of metadata? In this case, the repository I’m talking about is the Digital Public Library of America, which launched on April 18.* Underneath its beautiful website and inviting tag line, “A Wealth of Knowledge,” the DPLA is a set of linked, accessible, digital materials from libraries, archives and museums around the country. It’s one of hundreds of such national or regional libraries launched in the last several years. And yes, I, and hundreds of others, had booked plane tickets and hotel rooms and packed my party clothes to celebrate it.

"Digital materials raise deep questions about ownership, permanence, and access. In its approach to each of these questions, the DPLA is on the frontier of what building a digital civil society will require."

I see the DPLA as an encouraging example of our emerging digital civil society. Libraries in their familiar form represent community centers of knowledge, havens for voracious readers, on-ramps to broadband, and accessible hubs staffed by expert researchers there to help you. In the U.S., they rely on tax revenue and philanthropic resources and are often governed and managed by a robust mix of citizen volunteers, professional experts, and public servants. They physically embody the democratic ideals of inclusion, pluralism, participation, and progress.

The digital form evolves from these same ideals, yet must work within a digital economic frame that is distinct from its analog predecessor. Digital materials raise deep questions about ownership, permanence, and access. In its approach to each of these questions, the DPLA is on the frontier of what building a digital civil society will require. Like The Mozilla Foundation, Creative Commons, and WikiMedia, the DPLA is a non-profit built entirely around data and people — the future promises countless more such enterprises. Here are some of the ways these “digital civil society” institutions matter.

Ownership has at least three levels of relevant meaning — owning original materials, owning copies, and owning (or governing) the institution. First, the partners in DPLA own their collections. The DPLA is a library without books. Instead of a stand-alone collection, it is the set of common software codes and processes that connect existing collections and adapts for future ones. And while DPLA has developed these protocols, the institution’s success relies on them being freely open and used by others.

Ownership in the digital age involves issues of copyright and copying. Wide-open digital access to books still under copyright is both legally complicated and a contentious challenge to existing business models for authors and publishers. Rather than wait for these market and legal battles to settle, the DPLA chose to launch with public domain materials and participate in shaping policy and practice as real readers, writers, and publishers use the site. The approach is to encourage and uncover the practices that can inform new policies, perhaps through new authors’ alliance or a new type of “library license.”

Ownership also refers to how the DPLA is managed. While your local library or library system is probably run by local professionals, volunteers, and public servants, the DPLA has spent two years inviting participation and input from authors, museum curators, bookstore owners, librarians, technologists, readers, public servants, philanthropists, and anyone else. Wikis and listservs, elections, volunteers and hired staff, a board of directors from across the country — and every possible online communication tool to gather input — are being used. The commitment is to open and transparent governance, drawing from all stakeholders.

The Internet makes things permanent and fragile at the same time. While digital trails seem to last forever, storage and archiving of digital goods are considerably less stable than temperature-controlled rooms of carefully prepared paper. The only thing certain about digital technologies is their rapid pace of change. Recognizing that it couldn’t build everything or predict every need, the DPLA has been running parallel processes of “app labs” and developer challenges since its inception. We can’t predict where technology will take us, so the DPLA has built itself to adapt from within while also aligning with those who can push it along.

Image courtesy of the DPLA and used here under the CC BY 3.0 License.

Unlike your neighborhood library, the DPLA has no books, no reference librarians, and no building. It also never closes. Its core assets — the metadata that identifies materials and the software code that connects collections — are open for use and reuse. The DPLA has tried from the beginning to be inclusive and welcoming in designing its software, its governance structures, and its future scope of work — open meeting policies, bylaws, and draft articles of incorporation are all on the site. I’m not an expert in the design of digital materials for the visually impaired, but the FAQ offers detailed information on how the site is set up to reach these users.

Civil society as we have known it for centuries revolves around the use of private resources for shared, public benefit. The structures, practices and policies that we’ve built to encourage and protect these actions — largely in the non-profit and philanthropic sectors — are built on assumptions about ownership, time, and benefits. As digital technologies change how we own things, for how long, and how we share them our institutions and governance of civil society will also shift.

The DPLA is an experiment worth watching as it navigates these new waters and celebrating as it unfolds. When the time comes for the actual party, I’ll be there.

*The launch party was scheduled to take place at the Boston Public Library and was delayed because of the bombings at the Boston Marathon. The DPLA website did launch on April 18 as planned.

Lucy Bernholz is a philanthropy wonk. She is trying to understand how we create, fund, and distribute shared social goods in the digital age — what she calls the future of good. She writes extensively on philanthropy, technology, information, and policy on her award winning blog, philanthropy2173.com. She is a visiting scholar at the Stanford University Center on Philanthropy and Civil Society, a Fellow with the Hybrid Reality Institute and former Fellow of the New America Foundation. Bernholz serves on advisory boards to several national and international research centers and is a frequent speaker and media source on philanthropy and social innovation. She is the author of numerous articles and books about the business of giving, including “Creating Philanthropic Capital Markets: The Deliberate Evolution.”