Tweets vs. Smoke Signals: How to Follow the Papal #Conclave 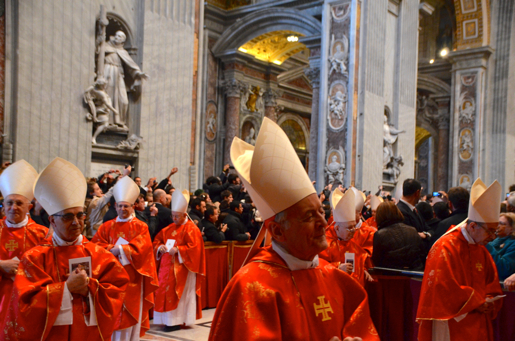 ROME – If you’re on Twitter, #conclave has been one of the best places to follow news about the next leader of the world’s 1.2 billion Catholics.

On Tuesday evening Rome time, between start of the vote, and the inconclusive end to the first ballot, tweets were coming in at around 40 per minute by my count, a mix of news updates from Rome, smartphone pics from around the Vatican, lewd comments from unknown locations on some of the recent scandals, and some light-hearted “gags”:

For many following the conclave, in Rome and around the world, online and social media is welding the ancient to the new, and keeping people posted."

Thinking of electing the new Pope in a Hunger Games format. #conclave

But most are just tuning in to hear the results, which should come within three days, according to Vatican spokesperson Father Federico Lombardi. The Vatican’s system for spreading news is sending black smoke up through temporary chimneys to announce that a round of voting failed to produce a winner. Everyone’s waiting for the white smoke, followed by the ringing of the St. Peter’s church bells, when there’s a result.

The system seems old-fashioned, but then we’re talking about a 2,000-year-old institution. However, for many following the conclave, in Rome and around the world, online and social media is welding the ancient to the new, and keeping people posted.

When the result of the first ballot was announced at 8 p.m. local time Tuesday, some of the thousands in St. Peters Square jostled to take photos of the black smoke rising, and post real-time updates:

Keeping up with the pope

It’s not as if there’s a shortage of sources, with more than 5,000 journalists accredited to cover the conclave.

Marek Drabik, a Norbertine priest based in Rome but from the Czech capital Prague, told MediaShift that he uses as many online sources as possible to keep up with the conclave news.

“I hit ‘like’ on many news sources on Facebook,” he said, making his way to St. Peter’s for Tuesday morning’s service. “But I use online, and watch TV, particularly the Vatican TV channel online and the YouTube channel.”

And Catholic students in the United States have set up a temporary Popealarm SMS service, and a Twitter handle @popealarm, for subscribers whose timezone means it is difficult to keep up in real-time with conclave news. That became so popular that by Monday, with more than 40,000 subscribers, the creators of Popealarm had to cancel taking any more subscribers.

Other Catholic and U.S.-based news services popular among the 5,000 or so journalists accredited by the Vatican to cover the conclave include the Catholic News Service, on Twitter @CatholicNewsSvc, and Rome Reports.

For others, however, it’s all about a mix of TV and newspapers.

Alessandro Pala, a Roman, told MediaShift that, “No, no Twitter, no Facebook; but I read many things, for example ANSA [the Italian state news agency], vaticano.va [The Holy See’s official website], many things.”

Luis Antonio Tagle, the relatively-young Manila cardinal who has been described by Vaticanisti as a possible contender for the Papacy, has almost 130,000 fans on Facebook. He’s not an avid tweeter, however, unlike some of his red-hatted counterparts, such as Wifred Fox Napier of South Africa and Roger Mahony, the controversial former Archbishop of Los Angeles, who was criticized in the past for allegedly covering-up sex abuse by priests in his diocese.

Jamming devices have been placed inside the Sistine Chapel to block all communications and Vatican staff have taken oaths of secrecy, so those last tweets mark the end of the cardinal’s communication with the rest of the world, until they finish voting and a new Pope is elected.

The new man will be a successor to the Throne of St. Peter and to the @Pontifex Twitter account, currently listed as ‘Sede Vacante’ (vacant seat) with the tweets posted under Benedict XVI erased. We’ll see if the new pope utilizes social media personally or leaves it to his followers.

Simon Roughneen is in Rome to cover the conclave. He is on twitter @simonroughneen and his website is www.simonroughneen.com