Does New York City Need a Physical ‘Made in NY’ Media Center? 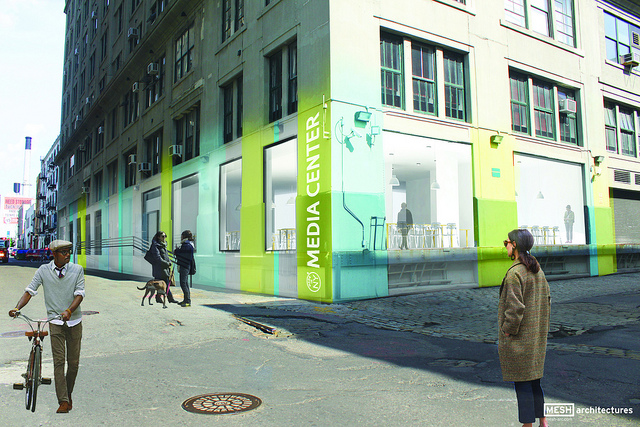 What the Made in NY Media Center will look like, opening summer 2013. Image courtesy of the NYC Mayor's Office.

New Media. Old Media. Film. Digital. Mobile. Lines have been blurring and mediums converging for the last few years. This summer in New York City, the Mayor’s Office is making sure these convergences happen in a physical space.

The area called “Silicon Alley” in DUMBO, Brooklyn, will soon become the home to the “Made In New York” Media Center. (The original Silicon Alley area in Manhattan has now broadened to include more of the city.) But some people don’t believe the city needs to have a physical home for new media, and others wonder why it’s located in an outer borough.

The Made in NY Center will be built on the philosophy that all media, traditional and digital, now runs on a continuum." -Jeff Gomez

Katherine Oliver, commissioner of the Mayor’s Office of Media and Entertainment, explains how the Center came about:

“The idea to have a centralized place where filmmakers could interact and grow in their craft has long been an attractive one to the city and seemed like a new way to support the local industry,” she said. “From the beginning, we wanted someplace where workshops could be held, where filmmakers could meet, and where screenings could happen. As the idea behind the ‘Made in NY’ Media Center started to take form, we were also watching the trends of the entertainment and media industries, and it became clear that New York City was quickly becoming home to numerous startups and digital companies. It made sense to connect the creative community with this new generation of innovators.”

ADVERTISEMENT
A press conference about the Made in NY Media Center. Photo courtesy of the NYC Mayor’s Office.

This cross-platform educational and development hub is indicative of changes the Mayor’s Office has been making as the Office of Film, Theatre and Broadcasting recently merged with NYC Media, the city’s television network, and then added social media and digital communication with NYC Digital to create a new city agency, the Mayor’s Office of Media and Entertainment.

Oliver believes collaboration is going to be key to the success of the Center. This thought reflects current trends in the entertainment industry where core story content is told across multiple platforms including gaming and mobile apps.

“If you think about it, the way people are consuming entertainment has completely changed in the past few years. Yes, people are still watching TV and going to the movies, but they’re also streaming films online and watching the latest episodes on smart phones and tablets. So for content creators following traditional business models — make a film, advertise a film, release a film — it may not be enough in today’s changing market,” Oliver said.

The city’s hope is that the Center will help smaller digital firms get on their feet by providing them with affordable workspace and access to a network of creative New Yorkers. Oliver predicts jobs will be created and new companies formed because of the Center. The heavy burden of these expectations rests primarily with IFP, Independent Film Project., which won the bid — over other New York-based cultural institutions including the Tribeca Film Institute — to operate the Center.

Executive Director of IFP Joana Vicente takes us through the thought process of getting involved in such a large undertaking:

“I was so overwhelmed when I first read the RFP [request for proposals]. At the time, the RFP seemed monumental: Find the space. Get an architect. Create a vision,” Vicente said. “This seemed like the next step to appeal to an even wider constituency, and we started getting really excited about it. We saw it as the opportunity that we needed to ground our vision. We saw this as a way to cross old media with new media and be at the forefront of supporting storytellers. It is what we do: matchmaking, curating and supporting, and connecting people to resources and investors, and audience. This felt organically what we should be doing.”

The inside of the Made in NY Media Center. Image courtesy of the NYC Mayor’s Office.

The Made in NY Media Center is scheduled to open in the summer of 2013. It’s located at 20 Jay Street in Brooklyn and housed in an 18,000-square-foot building overlooking the Hudson River. It will have a gallery with multimedia artwork and projects exhibited, a cafe, classes and a screening space. The Center will be open to the public and will offer different levels of membership for taking classes or holding screenings. Vicente hopes the Center will become “a destination — a place to take a class or take a meeting or just see an art exhibit.”

Connecting “creatives” to funding for projects is an ongoing struggle in the independent film and transmedia world, and the need for an incubator to match talents and tech companies was paramount to the vision for the Center. Jeff Gomez, CEO of Starlight Runner Entertainment, saw a need for a “Transmedia Incubator” in New York long before the seed idea for the Center was even grown.

“I was initially contacted a couple of years back by Katherine Oliver. She told me that the mayor was interested in reigniting the digital community in New York City, taking us back to the heights of Manhattan’s Silicon Alley and the vibrant community that grew around the dot-com boom,” Gomez said. “A centerpiece of this plan would be a large entrepreneurial incubator facility. Needless to say, I was very excited by the idea and we stayed in touch through the RFP process.”

Cross-platform and transmedia producers like Gomez believe the Center will be key to helping this and future generations of storytellers navigate the quickly changing industry.

“The Made in NY Center will be built on the philosophy that all media, traditional and digital, now runs on a continuum. Messages, themes and stories now need to be designed to flow through the complex channels of pervasive communication. We’re moving away from broadcast and toward an architecture that integrates rich content and richer dialog,” Gomez said. “There are new techniques to navigate these rough waters, and if we don’t teach them to our most innovative minds, to our entrepreneurs and to our students, they will fall behind. Every aspect of the Made in NY Center will carry transmedia methodology in its DNA, not just the ‘Transmedia Incubator,’ which is going to be a fantastic program in its own right.”

Not everyone in New York’s transmedia community sees the Center as the solution or Brooklyn as the ideal location.

Aina Abiodun co-founded StoryCode, a community hub, lab and creative consultancy for emerging and established cross-platform and immersive storytellers, and Transmedia NYC, a meet-up group with more 1,000 members. Abiodun weighed whether or not to respond to the RFP and ultimately decided it focused too heavily on the physical space. Abiodun feels a physical location doesn’t answer the NYC transmedia community’s needs.

“Brooklyn isn’t the populous center of the universe, but part of the city’s mandate was to serve the Brooklyn community. I don’t think the concrete means anything. Having an office in this day and age means nothing,” Abiodun said. “We live in the age of the Internet. Plopping down a co-working space isn’t going to create more experimentation in the transmedia world, and we are trying to stay as agile as possible as long as possible. I think to rush to the end and say we need this edifice where we’re gonna stuff people in there, and that’s gonna create something is kinda bulls#*t.”

Blaine Graboyes is an executive producer and game designer and serves as an active member of the PGA, the Producers Guild of America. Graboyes looks forward to NYC returning to its former glory as a production hub and acknowledges the future of cross-platform storytelling.

“Back in the ’90s it seemed like there was a boom with a post-production facility on every corner. Now with the ‘Made in NY’ tax credits, NYC is becoming like San Francisco — a home for digital productions,” Graboyes said.

The tax credits Graboyes refers to were part of an aggressive program by the Mayor’s Office to return film and television production to NYC in the post-9/11 economy and climate. The current initiatives are called the Made In NY Incentive Program.

Asked about the Brooklyn location, Graboyes weighed in on both sides.

“If you’re not in Manhattan there’s a lot of friction to overcome. It’s hard to get people out of Manhattan. If you’re in Manhattan, just hopping over to DUMBO is palatable, but if you’re coming in from outside Manhattan it would feel like more of a schlep out to Brooklyn, but this will change over time. Once the momentum is there, people will go.”

He adds, “Personally, all my contacts and resources are in Manhattan, but a lot of the younger people I work with do live in Brooklyn. More opportunities for producers — and by that I mean people that create stuff — to meet each other. That’s when stuff happens. If you get a hundred or so of these people in a place, things are guaranteed to happen.”

Other producers and organizations are waiting to see the opportunities that will arise from the Made in NY Center. Craig Singer, CEO at Hopskoch, has a wait and see attitude about the Center.

“I can admire anyone that can tap into what’s happening in transmedia, though I do think a lot of people speak about it and aren’t doing it. It is so competitive, and once the Center opens, the proof will be in the pudding,” Singer said. “As a filmmaker, I’ll see if this is a tool I can put in my toolbox to grow an audience or create a great market or demand. Many of these things are well-intended, and it will just be a matter of what are the practical applications once they are up and running.”

Terry Lawler, executive director of NYWIFT, New York Women in Film and Television, has high hopes for the Center.

“Many if us who provide services to the creative community have long been aware of the need for a place like the Made in NY Media Center,” Lawler said. “We are excited about the possibility of working with the Center to help to provide services to women filmmakers and entrepreneurs in our industry.”

Vicente says she is looking forward to working with NYC-based organizations to build the Center’s membership base.

The integration of digital technologies into storytelling opens new pathways, but Vicente emphasizes that good storytelling is still the end goal for IFP and the Center.

“Independent film has a very important role in the culture, but there are other forms of storytelling that can have impact on the culture. But to be well-told, they need to be good stories, and that’s where I think we can come in and support storytellers,” Vincente said. “Obviously, we want people to have a career and be sustainable and to have success in doing that. The independence is more about the spirit and the vision and protecting that creative force rather than where the financing is coming from.”

Correction: This story has been updated to correct which tax credits Graboyes was referring to.