In Vietnam, Draconian Decree Would Clamp Down on Blogs, Online Speech 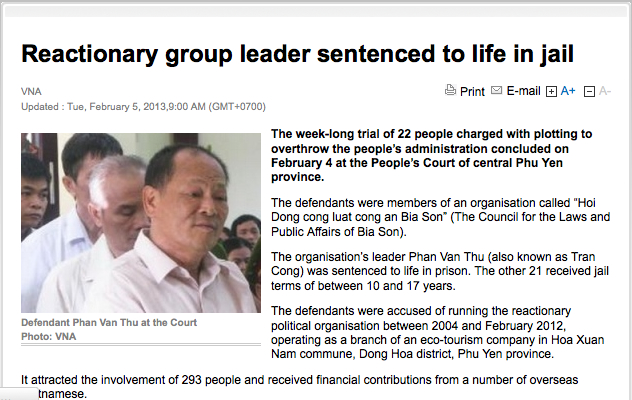 In the government-linked press in Vietnam, a bias against any opposition is overt.

Such coverage sheds light on how the media works in the one-party state where online writing has filled a void. In state-run mainstream media, topics such as power struggles within the ruling Communist Party and relations with China are often taboo, and challenges to authoritarian rule are dismissed with old-school Soviet slurs.

The Internet has enhanced knowledge and awareness among many Vietnamese, especially younger ones and urban folks, about shortcomings of various levels of government." -Ben Kerkvliet

Professor Ben Kerkvliet, a Vietnam specialist at Australian National University, told MediaShift that “my sense is that the Internet has enhanced knowledge and awareness among many Vietnamese, especially younger ones and urban folks, about shortcomings of various levels of government. Many Vietnamese now get news from a variety of sources, ranging from government and party-run papers and magazines to unauthorized blogs and newspapers to international news organizations.”

But new measures currently being considered by the government could tighten restrictions on Vietnamese who want to speak their minds online.

In April 2012, the Ministry of Information and Communication introduced the Decree on the Management, Provision, Use of Internet Services and Information Content Online, which in its first reading would force foreign content providers to increase cooperation with Vietnamese officials by removing content deemed illegal and potentially housing data centers within the country. The proposed code could require users to use their real names online, chilling free speech.

Phan Van Thu, the group leader referenced in the headline, was part of a group of 22 deemed subversive by the Vietnam government. The rest of the group got jail terms of 10 to 17 years, meted out by the People’s Court in Phu Yen Province after a week-long trial.

According to the Vietnamese media, “the defendants were accused of running the reactionary political organization between 2004 and February 2012, operating as a branch of an eco-tourism company.” And in what is usually a red flag for the Vietnamese government, the report said the group “received financial contributions from a number of overseas Vietnamese.”

In contrast to domestic coverage, international news reports described the group, known as the “Bia Son Council for Public Law and Affairs,” as dissidents or activists — the latest to become part of a drive by the Communist Party of Vietnam to shut down groups who disagree with how the country is run.

For Vietnamese accused of having links to foreign-based organizations that the Communist Party sees as threats to its power — such as the U.S.-based Viet Tan — incarceration is usually the outcome.

Bill Hayton, author of “Vietnam: Rising Dragon,” told MediaShift that “while the Vietnamese security apparatus is prepared to tolerate protest and criticism it is absolutely intolerant of dissidents working with foreign organizations, particularly those based in the United States. I think its pattern of behavior and its decisions about which dissidents to arrest is intended to draw a clear distinction between ‘legitimate’ dissent and ‘illegitimate’ treachery.”

The accused were assigned a lawyer by the government, Nguyen Huong Que, who said after the verdict was announced that “the sentences are adequate for their crimes.”

Intriguingly, the group was described by human rights activists as followers of Nguyen Binh Khiem, a 16th-century Vietnamese version of Nostradamus, who “dreamed of building a new ‘Utopia’ in which science, nature and humankind would be harmoniously balanced.”

In January, 14 activists and writers were sentenced to up to 13 years in prison, though in the meantime the Vietnamese government freed U.S. citizen and Viet Tan member Nguyen Quoc Quan after nine months in prison. That was followed by the February 6 freeing of lawyer Le Cong Dinh, who was detained since June 2009.

Despite the releases,, however, Vietnam’s human rights situation is getting worse, said academic Carl Thayer, a prolific commentator on Vietnamese politics “This year alone at least thirty-six persons have been sentenced to prison on trumped up charges of attempting to overthrow the socialist state,” he wrote in a new research note.

When Vietnamese citizens voice anger about land grabs and corruption in Vietnam, they are sometimes tolerated, sometimes not, in what is an opaque legal culture. Sometimes journalists in the mainstream press cover these issues — though it is not clear to what extent such coverage is approved in advance by authorities or to what extent the coverage is linked to faction-fighting or vendettas within the Communist Party.

But for some who write scathingly about alleged government malpractice, incarceration is often the outcome. Le Anh Hung was arrested in late January and is being held at a psychiatric institution in Hanoi — a form of detention reminiscent of Soviet-era practices. Le was subsequently freed on February 5.

Le Quoc Quan, a lawyer based in Hanoi, spoke to MediaShift in 2012 about the importance of online media in Vietnam where print and TV is linked to or run by the Community Party of Vietnam, the only political party in the country.

“The citizen’s press, non-official press, posting via social networks, SMS, Facebook, and blogs is an ongoing development and playing a more and more important role in the society,” said Le Quoc Quan last September. Le Quoc Quan was arrested in late January on tax-related charges – allegations that human rights groups say are trumped-up – and has been held incommunicado since.

Online sources have filled the void created by party-run media, but that too is now threatened.

For Vietnamese already used to restrictions, the proposed code could require users to use their real names online and for bloggers to post their real names and contact information on their blogs — a potential game-changer for Vietnamese who, caught between not wanting to go to jail and wanting to write honestly, use pseudonyms when writing online.

One motivating factor in the government’s drive to force people to write under their real name could be allegations posted on blogs last year – which were later refuted – that Prime Minister Nguyen Tan Dung’s daughter put money into a controversial residential development project outside Hanoi.

However the initial draft contained vague catch-all provisions seemingly aimed at deterring commentary that could question the government, prohibiting Internet users from “undermining the grand unity of all people,” or from “undermining the fine customs and traditions of the nation” as well as “abusing the provision and use of the Internet and information.”

Soon after the decree was first announced, 12 U.S. lawmakers, both Republicans and Democrats, wrote to Facebook, Google and Yahoo, saying, “We strongly urge you to advocate for the freedoms of speech and expression for the citizens of Vietnam by continuing to provide your technologies to the people of Vietnam in a manner that respects their rights and privacy.”

Part of the reason Vietnam’s government seems so intent on crushing those who suggest an alternative form of government is economic — numerous corruption scandals and slowing foreign investment forced a public apology from the ruling party last autumn and prompted speculation that if the economy stalls longer-term, more Vietnamese could question one-party rule.

But tightening the net too tautly around the web could prove counterproductive for Vietnam’s “emerging economy.”

Research by the McKinsey & Co. consultancy estimates that the Internet “contributes an average 1.9 percent of GDP in aspiring countries,” based on a survey of nine states, including Vietnam.

Note: Mediashift contacted The Asia Internet Coalition, an industry association including Google, Yahoo and others, seeking its views on Vietnam’s draft Internet law, but no response had been given at the time of writing.

As Burma Opens, Vietnam Clamps Down on Critiques by Bloggers by Simon Roughneen

Online Censorship Grows in 2010, Showing Power of Netizens by Clothilde Le Coz

Simon Roughneen covers southeast Asia for publications such as the Christian Science Monitor, The Irrawaddy and others. He has reported from Vietnam several times. He’s on Twitter @simonroughneen and his website is www.simonroughneen.com