How Malaysia Press Ignored ‘Gangnam Style’ Pratfall Ahead of Elections 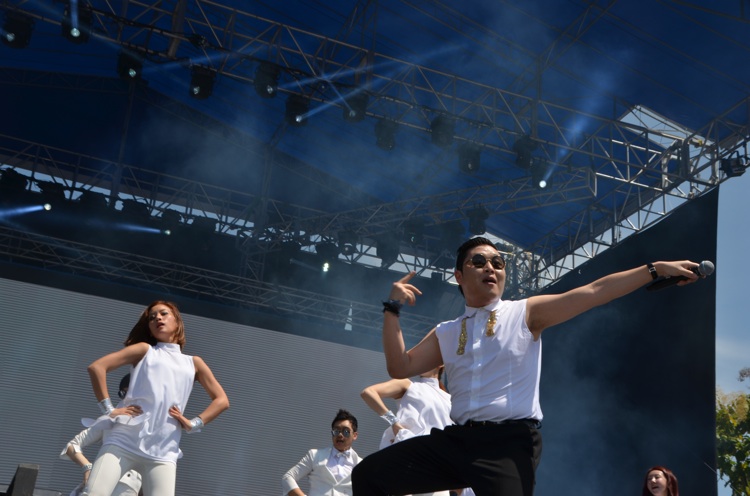 Psy onstage at a Chinese New Year gig in Penang. When the current prime minister was shouted down at the festival, most print media ignored the crowd's reaction, which went viral the same day. Photo by Simon Roughneen.

KUALA LUMPUR — On Feb. 17, Malaysia’s still-influential former Prime Minister Mahithir Mohamed weighed in on an ongoing debate about freedom of the press in Malaysia, a rising Southeast Asian economy.

“Frankly I would rather have the government censoring me … [I]f I don’t like what the government is doing, I can work for the rejection of the party which forms the government. But there is nothing I can do to stop people who may wish to deprive me of my freedom through the alternative media,” wrote Mahathir on his blog. He was prime minister from 1981 to 2003, the longest such stint in Malaysia’s history.

The print media has denied total access to the opposition, leaving them only the online media to reach out to." -K. Kabilan

Mahathir’s comments come as Malaysia gears up for a national election due sometime in the first half of 2013, with the country’s print and online media both slated in various quarters for partisan coverage.

The prime minister was warming the crowd up for the appearance of Psy, the Korean pop star, who flew in for the event at the invitation of Malaysia’s governing parties, which are getting ready for parliamentary elections.

Asking three times if the crowd was ready for Psy, Najib was met with a resounding round of “yes.” He followed up by asking, again three times, “Are you ready for BN? (BN stands for Barisan Nasional, the governing coalition in Malaysia).” Sections of the crowd in Penang, an opposition stronghold, yelled back “No!” as you can clearly hear in this YouTube video:

But going by some of the coverage in Malaysia’s long-established print press, you would not think the prime minister was on the end of such a rebuke, lighthearted as it was.

Newspapers such as The New Straits Times, The Star and My Sin Chew are linked to governing parties, and for the most part omitted any sense that the Psy gig — seen by many as an electioneering stunt — could have backfired.

For Keng Khai, from Penang, the event was all about Psy. Speaking an hour before the Korean took to the stage, he told MediaShift that “we’re here for Gangnam, I think most people are,” acknowledging however that he supports Malaysia’s opposition parties.

Such reporting is suggestive of how local newspapers have long been kept on a short leash by Malaysia’s press licensing system, which until recently required publications to apply annually for a permit renewal.

That provision, which critics said prompted self-censorship as publications feared that licenses could be revoked if the government took umbrage at unfavorable coverage, was amended last year.

However, Malaysia’s government can still revoke a license if a newspaper prints anything deemed “prejudicial to security, morality, public order public interest or national interest.”

Ross Tapsell, of Australian National University, told MediaShift that “critics have since labelled this ‘moon-walking,’ giving the illusion of moving forward but actually doing a backpedal that goes nowhere.

And while the government has enhanced civil liberties in a number of areas in recent years, there are concerns about an April 2012 amendment to Malaysia’s Evidence Act, which makes online publications liable for comments made by third parties.

While anonymous or pseudonymous “cyber-troopers” often post partisan remarks on stories published online, a phenomenon that should be reined-in, say some, the introduction of “intermediary liability” for third-party comments is making editors and moderators increasingly likely to block, edit or delete any and all remarks that could land the website owners in trouble, such as questioning the place of Islam in Malaysian law or insulting the country’s royalty.

Watching for such comments is a new concern for online news outlets — who though not entwined by the licensing restrictions around print-only counterparts — have been accused of acting as echo chambers for opposition policies.

However, a slight majority of Malaysian news readers interviewed by MediaShift do not regard online media as pro-opposition. “I don’t think the likes of Kini (Malaysiakini) are biased,” said Wong Siong Kiat, a 33-year-old engineer. “The government has control of the other papers so we have to read around.”

K. Kabilan is editor of FreeMalaysiaToday, an online news and comment publication. He told MediaShift that there are several reasons why online media can come across as opposition-leaning.

“The reforms sought by the online media are almost similar to what the opposition wants. As such, there seems to be a common cause between the two,” he acknowledged.

Kabilan says that the opposition has little option but to pitch its message to Internet-based news outlets. “The print media has denied total access to the opposition, leaving them only the online media to reach out to,” he pointed out.

Malaysia is formally a democracy, but critics say that incumbency tilts the playing field toward the BN, as seen in the pro-government leanings of the print media. The BN, which means National Front in English, has ruled nonstop since independence from Great Britain in 1957, overseeing Malaysia’s rise from poor country in the post-independence era, to “upper middle income” today, with a per head gross domestic product of around $8,000 and having the 30th biggest economy in the world, by U.S. government measurements.

Despite the government’s claims of a strong economic record, the upcoming election is expected to be closely fought, and the ruling parties have reformed some of Malaysia’s more restrictive laws, hoping to undercut the opposition’s “reformasi” sloganeering.

A Barisan Nasional spokesperson told MediaShift that “the prime minister has overseen the greatest expansion of civil liberties since Malaysia’s independence. He has ended the 50-year-old State of Emergency; repealed the Internal Security Act, which allowed indefinite detention without trial; expanded freedom of assembly; and liberalized the media.”

These changes — such as watering-down provisions that meant that people arrested for political protest could be detained indefinitely without trial — are seen as a pitch to Malaysia’s younger voters and urban middle classes, many of whom look to online media instead of or as well as older print outlets.

For some ordinary Malaysians, old reading habits can die hard. From Kuantan, the largest city on peninsular Malaysia’s east coast, Amirul Shazarin told MediaShift that “I read The Star, as my dad always subscribed, and some other newspapers. I don’t look at the online-only news, but I do read The Star online as well as print.”

Simon Roughneen covers southeast Asia for several publications, such as The Christian Science Monitor, The Irrawaddy and others. He has reported from Malaysia several times and is on twitter @simonroughneen and his website is www.simonroughneen.com