How Students Used Technology to Study Abroad While Staying Home 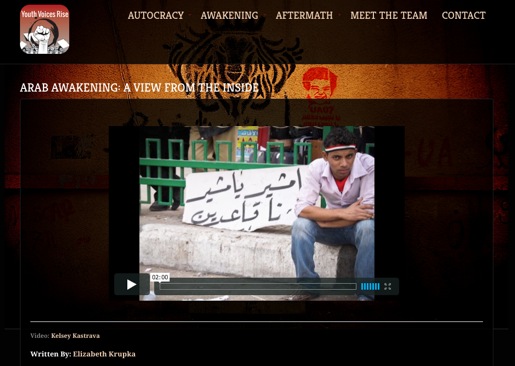 The homepage of the website created by Cabrini College students about the Arab Spring.

It seems that providing students with the opportunity for global education experiences is currently a major initiative in higher education. The benefits of preparing college students — especially journalism students — to become global citizens through international contacts are obvious. Some educators are calling it “internationalization.” But a recent report claims that the numbers of students studying abroad is virtually stagnant, involving only 1.4 percent of American higher education students. Tighter family budgets and increases in tuition make it harder to afford college, often ruling out student travel. So how can students connect directly with people halfway around the world to learn about major issues first-hand when they can’t go there?

Sometimes, when the place is dangerous or remote, a digital handshake is a viable path to global learning for college students."
The website home page graphics transformed into the first page of the iTunes e-book Arab Awakening: A View from the Inside.

One answer is using communication technology. But can students really gain international insights without the cultural immersion opportunities afforded by travel? My experience told me that being there — walking the streets, smelling the foods and shaking hands — is the best way to understand and interact. But sometimes, when the place is dangerous or remote, a digital handshake is a viable path to global learning for college students.

Here, I’ll lay out an example of using technology and international resources to help students understand and articulate a global perspective without travel. My senior communication students at Cabrini College in Radnor, Penn., decided to tackle the topic of the Arab Spring as their year-long multimedia capstone project.

It seemed like an impossibly complex project since the students knew almost nothing about the Middle East or Islam and couldn’t travel, but they wanted to do original reporting about young adults making a difference on the other side of the world.

We used collaborative cloud-based documents from the beginning of our Arab Spring multimedia project to facilitate our global information gathering. In addition to required course reading/viewing about the Middle East and Islam, the students had to post weekly annotated web resources to a class Diigo group This gave the class a virtual library of more than 175 relevant research sources for background information. In addition, students had a weekly requirement to tweet several links about the Arab Spring using the hashtag #cabconverg (for Cabrini Convergence). This got the students comfortable using Twitter for research and proved an invaluable way to find interview contacts later in the project. Also, all of our project management class documents were digital Google docs, which meant that they could be shared later with collaborators in Egypt.

Motivating the students to do background research about the region and religion was one of the frustrating parts of this project for me. With their expectation that all information comes in small chunks, it appeared that many of the students were just not prepared to do long-term, large-scale research. But the issues in the Middle East are quite complex and were very fluid at the time. Luckily, Diigo and Twitter became good information link containers. They provided structure for the weekly research assignments.

The Cabrini College Communication Department student journalists who created the Arab Awakening: A View from the Inside website during the 2011-2012 school year.

The project’s biggest challenge was finding a partner in the midst of Middle East revolutions who could provide the link to people willing to talk with college students in Pennsylvania. Fortuitously, Cabrini College has helped organize another example of using technology for global education connections since 2007. The study e-broad Global Solidarity Network connects American higher education classes from coast to coast in the U.S. with Catholic Relief Services aid workers in the world’s hot spots. Each semester participating faculty receive links to background videos and reading material about a social justice issue from Catholic Relief Services. Their students send questions and comments directly to the aid workers, who respond either in live webcasts or pre-recorded videos depending on the volatility of the international situation. This provides a dialog with people deeply involved in some of the world’s most pressing issues — an amazing educational resource.

Our contacts at Catholic Relief Services agreed to find an English-speaking class in Egypt that could partner with Cabrini students to create content about the historic events happening in Tahrir Square. Catholic Relief Services staffers in Cairo found a willing partner in Pandeli Glavanis, Ph.D. who was teaching political science research methods to graduate students at the American University in Cairo. Even better, the graduate students were conducting research about the Arab Spring as part of his class. Dr. Glavanis set up a collaborative class Wiki that gave access to course documents and projects to both our American students and his
class in Egypt.

The Cabrini students created a short YouTube video explaining the project to their Egyptian counterparts. A video Skype conversation was arranged between the two classes to break the ice, and the students exchanged short bios on the Wiki. Actually, our first attempt at linking the classes through video was a failed teleconference effort. It became evident that Skyping during off hours from people’s homes had better video quality than the teleconference attempt from Cairo during business hours.

While there was a lot of background research for my students to do before beginning to understand the enormity of the Arab Spring, the true learning excitement took place during Skype interviews with students and professionals in Cairo and Lebanon. My American students were quite moved by the personal life stories that their Egyptian peers shared during individual video Skype sessions. Due to the time difference with the Middle East, the interviews were often recorded during the middle of our night.

The Result: Cross-culture Connections and An Award

In the end, our students compiled about 20 videos, many text articles, infographics and photo galleries into a website called Arab Awakening: A View From The Inside. The site received the 2012 Pinnacle Award for Best Multimedia Feature Presentation from the College Media Association, a group affiliated with and supporting more than 800 colleges and universities with student media. Last summer, I converted the website into an free e-book which is available for the iPad.

This was an amazing experience for Cabrini students, who grew in their understanding
of the Middle East, of Islam, of journalism, of technology and about the importance of stepping out of their comfort zones. Cabrini students eagerly updated each other in class, quoting their latest interviewee. They felt a personal connection to the region, the issues and the possibilities. An American University in Cairo press release about the project described how Egyptian students also learned from their interactions with American students about communicating across a cultural divide.

As a teacher, it’s so exciting to see students engaged and enthusiastic. I feel strongly that the personal contact with people in Egypt — talking with them about their families and experiences — made an incredible difference in the depth of learning for our students. Although most college students cannot travel internationally, this kind of virtual contact can also be the catalyst to change student outlooks and spark the evolution of better global citizens.

Cathy Yungmann is an Associate Professor of Communication at Cabrini College in Radnor, PA. where she teaches multimedia storytelling and video production. In her first career Cathy was a Producer/Director in Philadelphia, PA broadcast television for a decade. She loves gardening because she can get dirty and help living things grow. Follow her on Twitter @cyungmann or at cathyyungmann.com