Can You Still Spot.us? Crowdfunding Pioneer Slumps Under APM 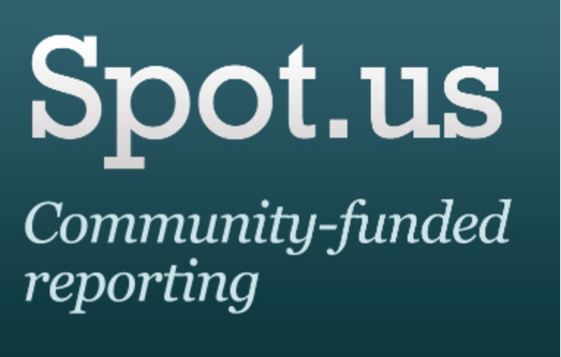 Crowdfunding pioneer Spot.us helped raise $120,000 for news reporting in 2011. That dropped off precipitously to just $7,000 this year.

Crowdfunding has skyrocketed in the past couple of years as entrepreneurs bypass traditional keepers of the purse and instead appeal to individual donors to help get their projects off the ground — and journalists have taken notice. Dogged by a lack of jobs and slumping wages, writers, producers, photographers and other content creators have joined the fray. As a result, crowdfunding has launched the careers of many independent journalists and helped keep others afloat, especially freelancers and news non-profits.

Once David [Cohn] left, I noticed the site had all these story pitches but no real funding behind it." -freelance reporter Jenn Ward
Jenn Ward’s Spot.us pitch has been seeking funding since January.

At the center of this movement has been Spot.us, the brainchild of journalism innovator David Cohn, which provided more than $120,000 in funding for news reporting last year. But that momentum dwindled since its acquisition by the Public Insight Network, a project of media giant, American Public Media.
(Note: Cohn also contributes regularly to MediaShift’s sister site, Idea Lab.)

With APM at the helm, Spot.us has doled out less than $7,000 in funding so far this year, and the rate of projects achieving successful funding has dipped from 98 percent to 37 percent.

Only a handful of pitches have posted to the site this year. Journalists who previously relied on Spot.us dollars to cover the costs of investigative reporting and public-interest stories are concerned about the future of the project, especially without the leadership of Cohn.

“Once David [Cohn] left, I noticed the site had all these story pitches but no real funding behind it,” said Jenn Ward, an independent reporter with more than four Spot.us successes under her belt. “I ended up feeling that pain as well.”

“We were the poster child for Spot.us.” said Susan Mernit, publisher and editor of Oakland Local, raising more than $8,000 in 15 months for various investigative reports. Mernit isn’t sure how her small, non-profit news organization is going to fill that void.

Linda Fantin, director of Network Journalism and Innovation at American Public Media, attributed the lack of activity to tougher vetting procedures and an “explosion in the crowdfunding space.”

Fantin said she is responsible for the day-to-day operations at Spot.us and is disappointed in the current level of activity, “especially for those who have relied on it for past projects.”

“The site remains functional, and we want journalists to use it to make money,” said Fantin, who invites feedback and ideas.

The organization is working on repositioning the site to provide a more financially sustainable model. Earning a meager 10 percent of donations, the site needs to bring in much more than $120,000 in funding to become a financially stable business.

Cohn admitted Spot.us was operating at a deficit at the time of the acquisition, but Fantin doubts that an increase in activity alone can sustain the business in the long-term. She said APM looked at providing funding for beat reporting as an alternative, but “it didn’t take off for various reasons.”

Spot.us launched in 2008 as the result of a $340,000 grant from the Knight Foundation. A review of the 2011 tax return for The Center for Media Change, the parent company of Spot.us, indicated that $150,000 was transferred to APM, but it’s unclear exactly how much of those funds originated from the Knight grant. Since Spot.us is a non-profit corporation, its assets are transferred to new owners, not purchased.

According to John Bracken, Knight’s director of journalism and media innovation, the foundation signed off on the transfer of any grant monies.

The remainder of the transferred assets continue to be earmarked for Spot.us, according to Fantin.

No Regrets About Sale

Cohn vetted the APM acquisition for nine months and says he has no regrets. “It was time for Spot.us to go beyond being an experiment to something that could have a broader impact in the journalism space, particularly public media.” Cohn felt that the Public Insight Network project shared a similar vision of citizen participation and that its parent company, APM, could devote additional resources to the project.

One of the more highly successful projects on Spot.us in 2012.

Cohn has since shifted his attention to Circa, a mobile phone news application which he says allows people to follow a story on their phone much in the same way they might follow a person on Twitter. Unfortunately, the APM directors who originally brokered the deal have also moved on. Andrew Haeg, who left APM recently to start GroundSource, wrote a piece about his move on MediaShift a couple of months ago. And so Spot.us has lingered.

“It’s unfortunate that the people have moved on and shifted careers,” said Knight’s Bracken.

There have been a number of personnel changes, which Fantin admits may have caused some confusion.

Cohn is largely credited with the previous success of Spot.us. “David was very approachable,” said Ward, who credits Spot.us with launching her freelance career. Ward expected her current project, an in-depth look at the fallout of the Occupy movement on the Oakland police department to achieve momentum considering all the issues regarding law enforcement’s handling of Occupy Oakland. Ward said she reached out to the new Spot.us management for advice, but “got no response.”

While Ward and others have struggled to achieve the same success on Spot.us as under Cohn’s direction, some projects are making it to the finish line. Recently earning more than $3,000 in funding, the Banyan Project, promises to “serve the broad public and engage their civic energy” as a news co-op. It has received the backing of many journalism industry leaders.

There are other alternatives for crowdfunding journalism, but Oakland Local and other former Spot.us users hesitate to try other crowdfunding platforms because their rules and focus are different. Emphas.is, for example, supports visual storytelling, while Spot.us focuses on civic journalism and investigative reporting. Both Kickstarter and Emphas.is require projects to achieve their goals, while Spot.us allows projects to go forward with what they have raised, if the creators agree.

Yet, the funds being raised at these alternative sites are worth exploration. Justin Kazmark, a Kickstarter representative, said journalism projects have received more than $2.3 million in funding so far, with average projects bringing in approximately $8,500. While projects on Kickstarter tend to ask for seed funding, Kazmark did point out several reporting efforts, such as the work of Ted Rall, a cartoonist and war correspondent who raised enough money on Kickstarter to travel to Afghanistan, where he filed a daily cartoon blog. A book on his project is slated for publication in 2013.

Emphas.is CEO Karim Ben Khelifa said two-thirds of projects on his site have achieved successful funding. Established in 2011, the average Emphas.is project earns about $12,000. Khelifa attributes the achievement to the “niche effects” of supporting highly specialized content, which is high-quality photojournalism.

These sites have built large communities of funders, not just users, and Fantin believes that’s what makes them so successful. But not everyone agrees that more is better.

“Kickstarter makes equivalent a fancy iPhone case and serious investigative reporting. How do you compare those two things and say, I want to fund this and not that?” said Lila LaHood, publisher of the San Francisco Public Press.

In its media release touting the acquisition, APM promised, “[W]e will explore opportunities to continue to drive the effectiveness and relevancy of the site even further in the future.” Yet, there is no mention of Spot.us or crowdfunding on its website (other than the release).

Whether or not Spot.us can be revived without Cohn at the helm is left to be seen, and is most definitely up to decision-makers at APM. Spot.us’ day-to-day operations are now in the hands of Fantin and Michael Caputo, an analyst for APM’s Public Insight Network.

Knight remains hopeful that APM can revive the site.

“American Public Media is one of the most vibrant national journalism organizations,” said Knight’s Bracken.

Marianne McCarthy recently completed a 14-month research project on crowdfunding. Her paper titled “Crowdfunding for Civic Journalism” was presented at the August 2012 conference of the Association for Education in Journalism and Mass Communication.