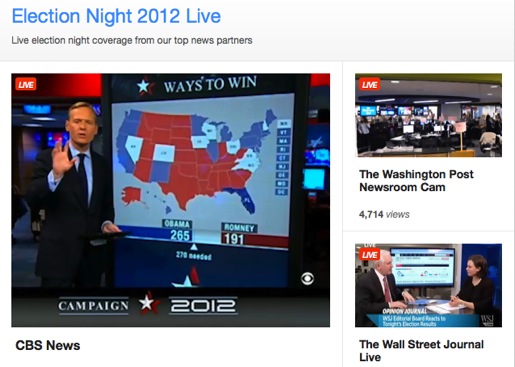 At Ustream we live for breaking news and the live event.

We went all out for the iPhone 5 announcement (6 million total views and 650,000 concurrent viewers), the presidential debates (3.5 million for the first debate alone) and most recently coverage of Hurricane Sandy.

We’re going after the election the same way.

The live event, that’s our thing. That’s what we do — our bread and butter.

Before our relaunch on Oct. 3, we were mostly a platform or a service than what we are moving toward now — a media company. We are a 5-year-old startup based in San Francisco and the No. 1 leader in live video, but we weren’t fully seizing our potential.

So, in concert with the first presidential debate, we launched our new site.

The new homepage now makes it possible for us to feature more than one piece of live video at a time. We are able to bring to the surface dozens of live feeds varying from PBS to Occupy, from J-school projects to a live and interactive drinking game. We can organize them into modules and actually display all of them on our front page.

Prior to Oct. 3, we didn’t have this capability. Imagine looking through a keyhole fixed on New York City. You’d get the narrowest view of the Big Apple. Our new design allows us to open the door and show you much more than ever before. We can bring together more content, to mix and match, curate and editorialize, to provide depth, context and more interaction between our viewers and our broadcasters.

The education and challenges of having so much

Oct. 3 was a big step toward our future and the future of live news consumption. We’re still in the learning phase. But, I think, we’re just getting started.

Of course, this is not without challenges.

First, we had to get a handle on what we have. We have so much content that it’s hard for us to know what, who and when many of our broadcasters are going live. As you can imagine, this is both awesome and frustrating. One day we’re chugging along and all of a sudden Howard Dean and Liz Cheney are debating each other. Or we’re watching the last presidential debate and — bam! — actor Ian Somerhalder pops on Ustream to talk about politics and gets 35,000 views.

We tackle this through our team of content monitors, live analytics, as well as social media since we’re integrated with Twitter and through our own social ecosystem of “following.” We’re getting better and better at discovery each day, but this will always be a challenge with our open, free and popular platform.

Second, making sure we have relevant, regular and live news content. If the content isn’t there at any particular moment, we can run the risk of opening a door to a darkened city. And when it comes to the election, we don’t want that. We want a rich and relevant experience.

So, as we planned for the election, our question is always: “What can we do that no one else can?”

There’s a balance to be struck between surprising and off-putting, a balance between the signal and the noise.

That’s where our content team — made up of veteran journalists and editors from places including the Associated Press and CNN — come in. To mitigate the danger of viewer confusion of what’s what, we have humans running the show, not algorithms. We curate, organize, discover and facilitate all of our broadcasts. We’re watching our content, spotting potential in it, elevating the signal, filtering out the noise around events like Election Day and every other regular news day events. The goal is to have a deep homepage so you can choose your own election adventure.

That’s the approach. We want to come at it from every angle, to add layers to what in our competitors’ hands is a flat, one-dimensional experience.

Ustream on election night was a selection of viewpoints from PBS, including the HATCAM, a static view of their newsroom, and election night analysis. Ustream offered perspectives from media mainstays like CBS News and the Wall Street Journal.

UPI goes live. The Washington Post goes with “The Fix” featuring Chris Cillizza. The Chicago Tribune makes its Ustream premiere with a full slate of analysis and news.

We also partnered with Video the Vote and our team of citizen reporters to go out and stream live from polling precincts in states where voter suppression was a concern.

And, just for fun, we had a live interactive drinking game that over the course of the four debates has already attracted more than 25,000 viewers.

This is where options, immediacy, and the future of election coverage converge.

But, beyond that, what gets me up in the morning is our ability to provide and spotlight alternative, independent and buried voices alongside those that are employed by much larger media organizations. That’s where we can change this game, where you can truly get variety within this narrowing view of American politics.

We’re broadcasting the socialist candidate as well as Barack Obama and Mitt Romney; we put the citizen reporter alongside Bob Schieffer, broadcasting analysis from all angles and highlighting areas of activism.

This is different than channel surfing. This is looking at the page, seeing dozens of live video feeds directly or indirectly part of the election, and picking which ones are important to you.

The potential is endless, and it’s everywhere. I can envision a depth of reporting in local, state and national coverage. We have the ability to collect and organize content from election breaking news, debates, town halls, from across the nation.

And with mobile video growing, with smartphones in every journalist’s pocket, with live video becoming more and more a part of our collective landscape, Ustream is ready to lead this conversation. We’re actively working with students and their J-schools; journalists and their media companies; activist and independent media groups, to make Ustream a destination when it comes to political coverage from all sides of the spectrum.

We’re in a shift right now beyond television to the growth of the second (and third) screen, and everything is shared and immediate. We’re not consuming TV like we used to, and even when we do we have Twitter open, we’re posting on Facebook, we’re sharing it with whomever we can share it with.

During a conversation here at Ustream, someone threw out, “We are the new TV.” At the time, I was on board with that. That was before we launched. We’re beyond that. To be the new TV, we’d have to first be something like TV. I don’t see us that way. I don’t see us as the new anything. We are Ustream.

Terry Parris Jr. grew up in metro Detroit, slinging papers for the Detroit News. His job delivering papers nearly turned into a job writing for them. But the Internet happened. Instead, he landed a job for a Detroit-based online media startup call Model D Media covering the city of Detroit, and the beauty inside of it (yes beauty). He hasn’t left the web since. After nearly three years as news editor, Terry moved on to manage and edit three websites for the hyperlocal news network Patch.com, one in Michigan and two in California’s East Bay. He is now the community manager for news at Ustream, a startup based in San Francisco that leads the way in live video. A big part of his job includes working with citizen reporters and community journalists, helping them navigate the world of streaming from the basic how-to to understanding their needs, wants, passions, and, sometimes, dreams. He’s a hyperlocal enthusiast, a citizen reporter proponent, and a Detroiter forever.