3 Collaboration Lessons From Social Media Campaign for ‘Half the Sky’ 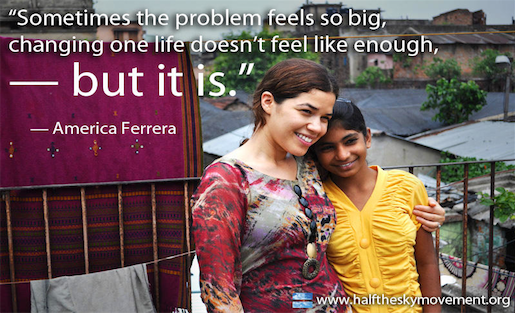 This graphic was circulated online as part of the extensive social media campaign for "Half the Sky."

“Have you heard about this ‘Half the Sky’ thing?” my friend Karen wrote to me on Facebook, referring to the film/book/multi-platform phenomenon that has gotten tremendous media attention as of late. Later that same day, several other friends posted about the project, and I saw references on Twitter as well. This ubiquity is no accident — it’s the outcome of an ambitious social media campaign, and guess what? That campaign is the result of our favorite subject here at Collaboration Central. (That would be collaboration.)

In case you aren’t familiar with “Half the Sky” (full title: “Half the Sky: Turning Oppression into Opportunity for Women Worldwide”), it’s a book by Nicholas Kristof and Sheryl WuDunn that inspired a documentary produced by Show of Force; the film recently aired on PBS. More broadly, “Half the Sky” is an ongoing campaign to raise awareness of the problems facing women and girls worldwide, from sex trafficking to barriers to education and economic opportunity. Watch the trailer for the film:

Smart people committed to collaborating will be ready and willing to pounce on opportunities, whether large or small, instead of just sticking to a pre-scripted game plan."
ADVERTISEMENT

Here are just a few examples of the social media campaign’s success:

I recently spoke via a Google Hangout with the team behind the social media campaign: Jonathan Archer, digital content coordinator at the Independent Television Service (ITVS); Kevin Dando, director of Digital Marketing and Communications at PBS; and Liriel Higa, social media strategist at Show of Force. Here are three lessons they shared about how collaboration fueled their success:

“If you have people who don’t want to collaborate, that’s going to be a challenge no matter what structures you set up,” Archer observed. In other words, even the fanciest collaboration software won’t amount to a hill of beans if the people involved in a project don’t want to work together. Listening to Archer, Dando and Higa talk, it was clear there was abundant mutual respect and that each found the others very easy to work with. “Don’t replace people with tools,” Archer said.

This lesson is far and away the most important of the three. Before you embark on a collaborative project, make sure the people involved are ready to make it work, or no amount of planning or process engineering (or money, not that any of us has much of that, these days) will let your project reach its potential.

“This is one of the best professional experiences I’ve ever had,” Dando said. “Having partners who were nimble … made such a difference.”

Many times, the temptation going into a collaborative project is to document processes up the wazoo, detailing who’s responsible for what, where, how and why. In fact, elsewhere on Collaboration Central, we’ve cited planning early and often as a best practice. And it’s true, planning is important — but so, say Archer, Dando and Higa, is the ability to be nimble, agile — to respond to opportunities as they arise. If one of them saw that a news event relevant to “Half the Sky” had taken place, they’d flag it, and quickly craft a tweet, which the other two would immediately retweet. When Archer had the idea to create a Hashtagart mosaic, all three partners quickly mobilized to make it happen.

It’s not rocket science, but this kind of basic, timely coordination can often elude big-media companies. It reminds me of EconomyStory, the public media collaboration I managed a few years back; while 12 news organizations worked toward the holy grail of editorial collaboration, we found that collaboration via Twitter was an accessible and achievable stepping stone that built goodwill.

But “Twitter” isn’t the takeaway here — rather, it’s that smart people committed to collaborating will be ready and willing to pounce on opportunities to collaborate as they arise, whether large or small, instead of just sticking to a pre-scripted game plan. It’s also worth noting that this kind of quick, opportunistic behavior is only possible when partners share clear objectives and healthy amounts of trust.

Archer, Dando and Higa relied heavily on Google Docs and Gchat to help them collaborate. As Archer put it, the project “had more moving parts than you can possibly imagine,” so being able to coordinate easily in real time was essential, and these tools got the job done. For example, Higa shared a detailed plan via Google Docs for live tweeting during the PBS broadcasts, which Archer says was pivotal to getting #halfthesky to trend. Again, this isn’t rocket science — document sharing and online chatting are pretty common approaches — but it’s helpful to remember, when planning a collaboration, not to overlook the ways in which simple tools can be used to great effect. (The team also had weekly phone meetings and were frequently in touch by email.)

In the trailer for “Half the Sky,” a woman tells actress Meg Ryan about a little girl that was sold from a brothel; the girl looks to be about 5 years old. Ryan later says to the camera, “You can’t come up with something more innocent than a young, innocent girl. And to inflict that experience on that human being is unspeakably cruel.” With such high stakes, figuring out how to collaborate effectively isn’t about management efficiency or trendy work habits; it’s about being effective as human beings at easing others’ suffering.

Editor’s note: An earlier version of this article mistakenly identified Ms. Higa’s last name as “Haga.” We apologize for the error.