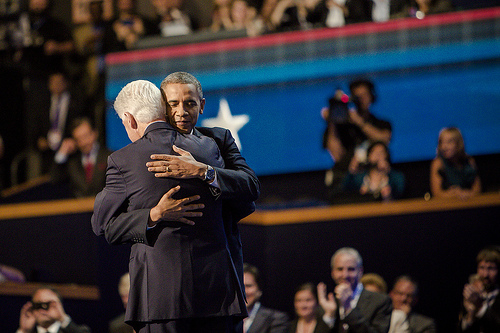 Maybe President Barack Obama is hugging Bill Clinton because he knows he just sparked a new trending topic on Twitter? Photo by Kris Krug.
The conventional wisdom about conventions is wrong, elitist and -- when you think about it -- pretty oddly timed."
Click to read our whole series
ADVERTISEMENT

Those are the familiar arguments casting the very concept of political conventions as a pointless relic of a bygone age. Even the Obama campaign considered scuttling this year’s gathering for a series of decentralized rallies around the country. But the conventional wisdom about conventions is wrong, elitist and — when you think about it — pretty oddly timed.

This year, the traditional dominance of one-way speeches is shifting, at least slightly, toward a more interactive and spontaneous conversation. It’s fueled by tweets from citizens and professionals alike, and the media is increasingly studding its own punditry with those additional reactions.

Take the Big Dog. Bill Clinton served up 48 minutes of factual ferocity at the Democratic National Convention, and people responded around the world. His declaration that “arithmetic” proves Obama’s budget is superior to that of Republicans struck a chord — on Twitter, the word became a global trend on Wednesday night. Opponents also pushed back during the speech, retweeting a quote of Clinton’s view on Obama in 2008: “Give me a break.” The back-and-forth revealed an audience eagerly engaging Clinton’s asserted authority.

The discussion of Clinton’s economic address offered a more wonkish echo of another overwhelming convention reaction, the giddy explosion during Clint Eastwood’s rambling RNC appearance. That fertile terrain enticed President Obama to commit a convention first, issuing his formal response to the Eastwood attack on Twitter. The president’s reply, theoretically posted for his followers, instantly bubbled up to the press.

“This seat’s taken,” the wry, swaggering rebuttal which accompanied a picture of the Commander in Chief’s chair, was a messaging and organizing success. It drew 54,000 retweets and a very prominent place in press coverage of the RNC’s final night. And in Charlotte, N.C., this week, an Obama campaign aide reflected on the strategy of sending out that message at 12:29 a.m. on Friday morning, a potentially risky senior staff decision. The huge online reaction was “proof positive,” the aide argued, that a nimble Internet strategy can rival a multimillion-dollar scripted convention bonanza. Still, that kind of pushback doesn’t work if it fails to “engage supporters in an authentic way,” the aide added. (The campaign official requested anonymity to discuss internal strategy.)

The time and social pressures of the web are also eating away at another convention tradition, the notion that each party should be left to politic in peace without sniping from opponents. During an opponent’s convention week, candidates typically dial down major campaign events and announcements.

Standing on the floor by the Virginia delegation on Tuesday night, Jennifer Crider, a national campaign director for House Democrats, was busy attacking RNC spokesman Sean Spicer for being as misleading as Paul Ryan’s convention speech. She was not talking into one of the video cameras lining the floor, but tapping out a tweet. “You have to have a strong grounding in traditional media,” she told me, but campaign messages don’t take root without “a presence in social media.”

The new visibility of instant audience reaction makes “unscripted moments” even riskier, Trippi argued, but campaigns can’t reduce the risk to zero. Trippi, who was in Charlotte to provide commentary for Fox news, said politicians routinely ask him how he got a million Twitter followers — but not because they want a strategic messaging platform. “They’re interested in money,” he said.

In the end, the conventions are the only time that the parties, which claim to represent national coalitions, actually gather to talk in person and address the nation. Even in this fractured media environment, they still draw the largest audiences of any campaign activity besides the debates. They provide some of the only direct, un-purchased arguments from the candidates. And for many of today’s three-screen media consumers, conventions are almost certainly more fun to watch, and more accessible to engage, than they were in the Good Old Days.

The Democrats’ former party chair, Terry McAuliffe, who looked ecstatically at home chatting up delegates in Charlotte, said there’s no doubt that social media is opening up an old tradition to new people. As for any proposals to cancel the conventions in favor of smaller events, McAuliffe was not biting. “You’d have to change the charter of the party,” he said, a measure that diehard party members would oppose. “That’ll never happen,” he said, beaming.

Ari Melber is an attorney and correspondent for The Nation magazine (Contact via www.arimelber.com)