How Startup Magazines Crowdfund, Crowdsource, and Hold Onto Print 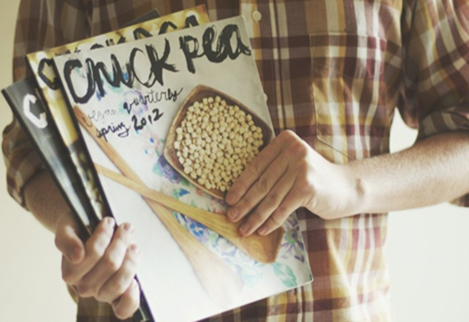 Every few odd weeks or months, a story pondering the future of magazines resurfaces, generating an updated round of debate on this form of print media we aren’t ready to let go. While recent pieces like David Carr’s “Wondering How Far Magazine Will Fall“ may dampen the spirits of those still holding out for a print magazine comeback, the land of startup magazines exhibits just enough novelty and success to keep print hope alive.

In the past year, there has been a steady output of crowdfunded journalism projects, many of which are entrepreneurial in spirit and target a niche community. (An assortment of crowdfunding platforms and successful projects were covered in the MediaShift piece, “Crowdfunding Journalistic and Photojournalistic Projects.”)

"One pitfall of many project creators is that they don't know that Kickstarter in itself is not a sustaining business model." -Cara Lynne of Chickpea

A survey of print magazine projects on two major platforms, Kickstarter and Indiegogo, draws up a few broad project categories. First, there is a focus on local: ThirtyTwo aims to provoke a cultural renaissance in the American Midwest, and Local plans to give a voice to “one, overlooked American town per issue.” The second major category is niche interest: Creatives are pushing for magazines on women empowerment, Latino empowerment, and positive body image.

In contrast to the online publishing cycle, which demands constant and regular updates, these print magazine projects embrace the slow and mulled-over nature of the print format. All of the examples mentioned publish bimonthly (every two months), quarterly, or on even less frequent schedules. Most magazine campaigns on Kickstarter and Indiegogo do not reach their funding goal, but for the few that do, how can they turn a successful campaign into an actual magazine, and how — dare they dream it — can the new magazine become sustainable?

The Next Steps of a Successful crowdfunded campaign

Once a crowdfunded campaign hits the funding goal, the project creators are responsible for producing a tangible product. Howler Magazine, a soccer magazine with a focus on North America, launched its Kickstarter campaign on May 29, and after one month, reached the funding goal of $50,000 (and nearly $20,000 in excess). Howler is clearly addressing an unfulfilled need, but where does it go after Kickstarter?

Backers who contribute $15 or more receive the first issue, so the campaign essentially sold over 1,400 copies of the first issue. But a plan to keep printing and growing was built into the campaign: Those who pledge $50 or more will receive a one-year subscription to Howler, which will publish quarterly. “Our plan is to release the first issue and work hard to keep attracting subscribers,” said Howler creator George Quraishi via email. “In the meantime, we’re exploring a couple of launch partnerships that will help us not only to bolster our finances but to reach new readers as well.”

Reflecting on Howler’s crowdfunded success, Quraishi said that the top advantage of using Kickstarter is that it “provided a direct line of communication to our potential readers and created a sense of shared responsibility for getting the magazine off the ground.”

Chickpea Magazine, a vegan quarterly in both print and digital editions, raised more than 800 percent of its funding goal in the fall of 2011 and has put out an issue each season since. Chickpea actually turned to Kickstarter a second time this past June as a subscription drive for the summer issue.

“I was surprised that so many people from around the world believed in our magazine the first time we did a Kickstarter project; I was stunned that those same people gave again for our second project!” Chickpea co-creator Cara Lynne said in an email.

This idea that multiple Kickstarter projects can fund subsequent issues of a print magazine suggests it’s possible for the Internet population to make recurring payments for products that resonate with them. But limitations still abound.

Tomorrow Magazine, a crowdfunded, crowdsourced project by former editorial staff at GOOD Magazine, generated a lot of buzz over the summer by raising more than $45,000 in a matter of weeks. Ann Friedman, one of Tomorrow’s creators, isn’t convinced that crowdfunding will save magazines. She said via email, “Crowdfunded is just a more modern version of ‘subscription-funded’ … Which is why I don’t think it’s a feasible long-term funding solution for individual magazines or for journalism overall.” Friedman sees Kickstarter as a tool to create one-off projects like special issues and magazine-related events, which is the plan Tomorrow will be sticking to.

Cara Lynne of Chickpea agrees, “One pitfall of many project creators is that they don’t know that Kickstarter in itself is not a sustaining business model.” Because Kickstarter and Amazon take a combined cut of almost 10 percent, Chickpea has had to seek out additional ways of sustaining the publication. Outreach to big blogs, publications, writers and artists, and growing the Chickpea founders’ popular food blog have significantly driven the number of sales, contributors, and product reviews.

Many startup magazines are not only breaking down the walls of funding, but also of content. Chickpea crowdsources each issue, and Tomorrow opened up submissions to the world.

“The content in our issues are all submissions from people all over the Internet; their submissions steer the magazine in the direction they want it to go,” said Lynne. “I’m a big fan of shining a spotlight on better quality content and design, and keeping fussy curation backstage.”

Crowdfunding and crowdsourcing a magazine affords a freedom to curation, which allows for decisions like eliminating advertisements from print editions, as Chickpea has done.

While not crowdfunded in the Kickstarter sense or crowdsourced like Chickpea, the New Inquiry is nevertheless helping to keep the magazine experience as relevant as ever. Rachel Rosenfelt, co-founder and editor-in-chief, said the New Inquiry is particularly attractive to the under-$25,000-a-year income bracket, which finds the $2-per-month micro-payment model less restricting than typical subscriptions.The monthly digital publication — with PDF and iPad versions — has been gaining traction throughout the year, adding to its editorial board with provocative writers such as Adrian Chen from Gawker and 140-character storytelling master Teju Cole.

“My theory is that if you put together the right collection of talent and give them both the resources and freedom to write or commission new work, and explore the outer limits of their interests and ideas, the calibre and originality of the final ‘product’ will speak for itself,” Rosenfelt said via email.

The New Inquiry is growing readership by championing “complementary talent”: Evan Calder William’s Socialism and/or Barbarism and Atossa Abrahamian’s investigative journalism will bring in very different readers, but who may grow loyal to the overall magazine aesthetic and concept.

The idea of “complementary talent” and assembling voices is a promising one for magazines in general. A new study shows that 56 percent of total Twitter users between the ages of 18 and 34 follow an editor or writer. In essence, crowdfunding and crowdsourcing are all methods that bridge the gap between those who labor tirelessly for publications and the readers, new and old. By paying more attention to who is speaking for a publication and on what platforms, magazines might find that one day, readers will be paying to engage with their writer/editor “friends” on social media.