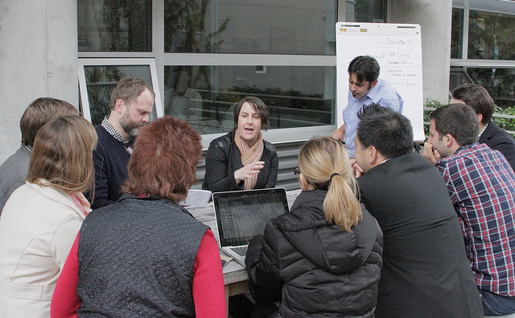 Journalistic collaboration isn’t just something that happens between newsrooms. Increasingly, journalists working outside of traditional news organizations are coming together to support each other in a range of ways, from offering safety advice when covering protests to sharing news tips, local resource recommendations and more.

“When ecosystems change and inflexible institutions collapse,” Clay Shirky wrote in a post on his blog, “their members disperse, abandoning old beliefs, trying new things, making their living in different ways than they used to.” In the news industry, an ecosystem is emerging that’s fueled by independent and citizen reporters, along with a new generation of small non-profit news sites. These new journalistic entities are putting themselves on the line without the kind of legal, administrative or technological support of major newsrooms.

These new networks are designed to provide something the larger journalism ecosystem is largely lacking: solidarity."

“Journalists who work for big institutions will continue to have better protections,” Rebecca Rosen noted in The Atlantic almost a year ago, “not because of laws that protect them but because of the legal power their companies can buy.” That means journalists outside such institutions need networks of support to provide protection for them, and for the work they do.

The lack of support and protection for journalists has made this one of the most deadly and dangerous times to be an independent journalist. The International News Safety Institute lists almost 90 journalists and media staff who have been killed in 2012 alone. The Committee to Protect Journalists found that of the 179 journalists imprisoned worldwide in 2011, 86 were digital journalists and 78 were freelancers. Here in the U.S. nearly 90 journalists have been arrested or detained in the past year, and in state after state citizens have scuffled with police over their right to record. As these statistics make clear, in journalism’s changing ecosystem, networks that provide protections for journalists are essential.

Police and citizen journalists clash at the NATO summit earlier this year.

In my work tracking press suppression and journalist arrests I’m beginning to see some of those networks emerging. For example, in the week leading up to the NATO summit, a group of independent journalists organized a Google Group email list to share information and connect on the ground in Chicago. Roughly 50 journalists from all over the world joined the list, and in the days leading up to the protests they used it to plan their coverage, share local tips (like this map of places to buy camera equipment in a pinch), and socialize. As the protests swung into high gear, the list was alive with posts from people comparing notes, sharing where the action was, and helping each other confirm details or track down sources.

Joe Macaré, a local Chicago journalist who works with Truthout and the Occupied Chicago Tribune, set up the NATO email list in hopes of connecting journalists around the nation to local Chicago independent media. One member of the list, Aaron Cynic, said via email that he found it useful for journalistic support and collaboration, but also for legal support. He said the list was helpful for “creating solidarity between us, fostering relationships, sharing information and photos, and also, getting information to the NLG [National Lawyers Guild] to help with people that had been arrested.” Another member of the list, Ryan Williams, lamented via email the lack of diversity on the list, but acknowledged that “the list was great … as a networking resource, and as a good early warning system for developing stories.”

Journalists used the list for everything from meeting up for dinner to providing information on movements of marches and protests. Kevin Gosztola, another list member, pointed out via email, “You could run questions by others, ask what to do next if you hit a roadblock, inform others of something that happened that you think is an abuse of power, etc.” After NATO, the members decided to keep it going as a forum and network for journalists who are covering protests, Occupy and a related set of issues. (Disclosure: I have been on the email list since before the NATO summit, using it to monitor reports of press suppression at protests.)

The NATO email list was unique as it merged online and offline components and was truly ad-hoc in nature. Other networks that have emerged tend to occupy either an online or offline space, but rarely both. The local meet-ups by Hacks/Hackers and Online News Association chapters that have developed and spread quickly across the country (and world) are great examples of how local journalists are connecting and collaborating in person to support their work. Online, Twitter chats like #WJCHAT and the email and blog network Carnival of Journalism represent the digital equivalent of such collaboration where journalists are debating critical issues about the field, sharing lessons about their work, and supporting each other.

Both online and off, these new networks are designed to provide something the journalism ecosystem is largely lacking: solidarity. In a passionate post, Bryan Westfall, an independent journalist in the Bay Area, writes, “The work we do in these circles is up against something violent, self serving, and relentless … we need each other in a way that must be personal in a way no version of simple ‘networking’ could ever be.”

Many independent and freelance journalists I talk to describe feeling isolated in their work. “We need to continue to foster that solidarity,” Cynic told me. “We don’t have the same resources or protections as corporate media — all we have is each other.”

Networking with the Audience

During a recent Free Press webinar Pool, one of the best-known livestream journalists who has covered Occupy protests for the last year, said, “The Internet is my fixer.” He was referring to the way his audience would step up during his coverage to help get him out of a bind, whether it was to get him food or water or a spare battery. Indeed, the webinar itself was designed less as a formal panel and more as an open conversation, drawing on the legal and safety expertise of the panelists but complementing that with personal stories and advice from the audience. The event helped connect independent journalists before the Republican and Democratic national conventions and foster more ad-hoc networks of support. This highlights the potential of new networks that enable audience members to become media allies — both part of the journalistic process and advocates or defenders for that process.

To remake journalism, we need to build new networks of resiliency for the future of news. When we talk about the journalistic resources we have lost in recent years we tend to focus almost exclusively on the number of jobs lost, not on the capacity of the entire field to fight for the First Amendment, protect each other and our reporting, and support experimentation and eventually sustainability. To the best of my knowledge, there has been no comprehensive effort to map the needs of the new journalism ecosystem in these terms. Perhaps now is the time.

Editor’s note: An earlier version of this post mistakenly identified the creator of the NATO list as Joe Macera. His name is Joe Macaré.