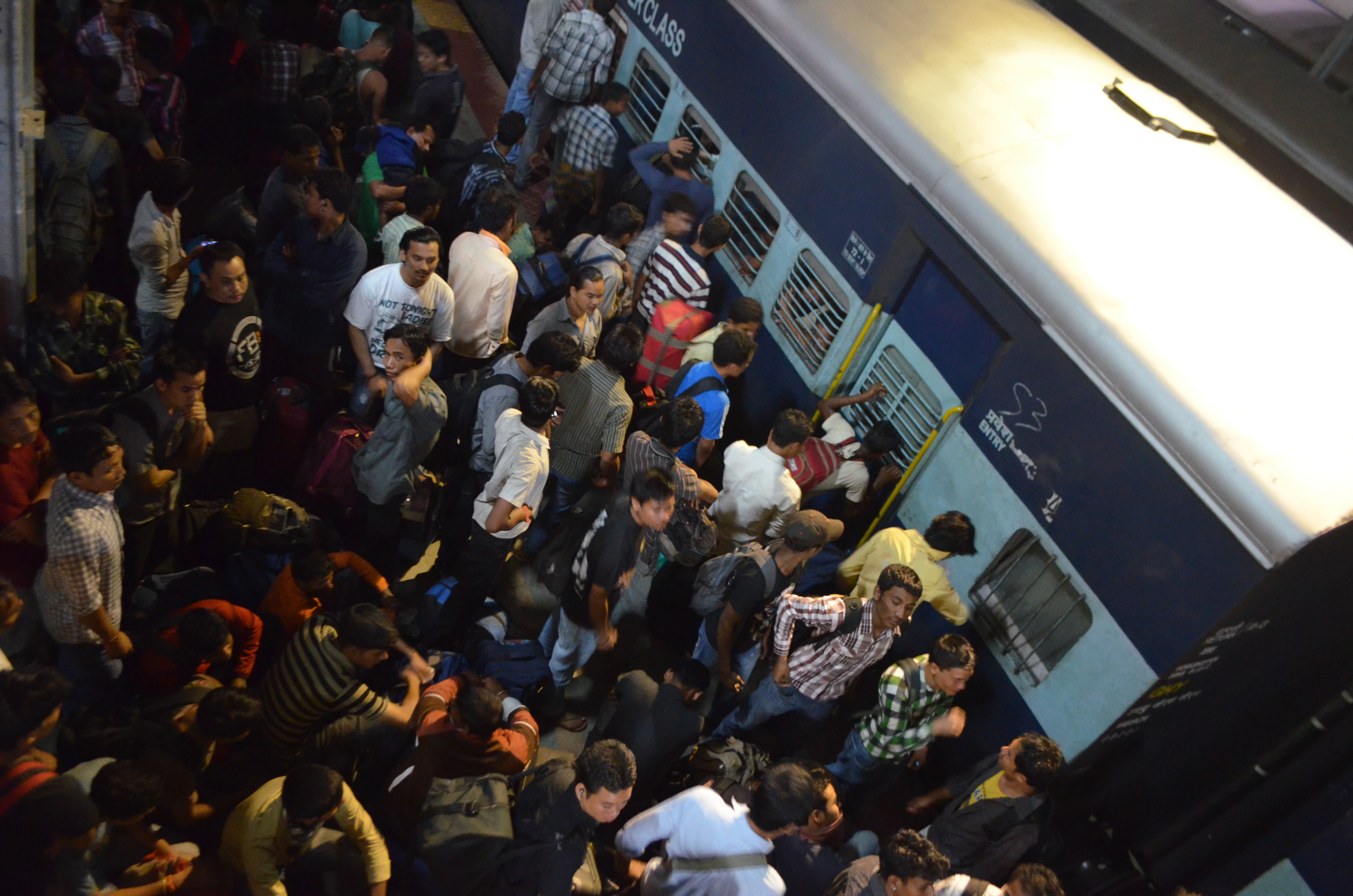 BANGALORE, India — The Indian government has gone on the offensive against Internet giants such as Facebook, Google and Twitter, demanding hundreds of pages be removed or blocked after political unrest erupted in various parts of the country.

On August 15, India’s independence day, Indian northeasterners began fleeing Bangalore, the country’s southern IT hub and 5th largest city, after text messages said to threaten Assamese people and other northeasterners were sent around.

In the [peer-to-peer] world, where the government no longer has that control, it is now trying different ways by which it can reinforce its authority." -Nishan Shah

Authorities restricted text messages so they could be sent to only five recipients to stop bulk sending, which was followed by a government backlash against social media and news sites; more than 300 pages have been blocked in recent days.

The scene during the exodus was reminiscent of an old newsreel from World War II Europe, or, more aptly, from the separation of India and Pakistan in the late 1940s when around 25 million people took flight amid chaos and bloodshed as the contours of the new states were drawn up after British withdrawal.

On the platform at a Bangalore train station were hundreds of people from Assam state and other areas of India’s northeast, a remote part of the country almost 2,000 miles away. The region is mostly surrounded by Bangladesh, Bhutan, China and Burma and is linked to the rest of India only by a narrow strip of land nicknamed the chicken-neck.

Inside Bangalore’s Electronics City, a purpose-built IT hub about 45 minutes drive from the city center. Photo: Simon Roughneen

In July, fighting in the northeast’s Assam state between local ethnic groups and Muslims — which some Indians say are illegal immigrants from Bangladesh — killed 80 people and forced 400,000 more from their homes, most of them Muslims. On August 11, a march in Mumbai , India’s financial capital, ended up in a riot, with two killed and dozens injured, when Muslims there protested attacks on Muslims in the northeast and on Muslim Rohingya in Burma.

The SMS scare in Bangalore came next, but who sent what and why has never been clearly established, though three men were subsequently arrested in Bangalore on suspicion of mass-forwarding threatening text messages.

Nonetheless, the scare, real or hyped, was enough to prompt panic among the 300,000 or so northeasterners who study and work in Bangalore. Interviewees at the city’s rail station, waiting for a train to Guwahati in Assam state, a two-and-a-half-day journey, said they hadn’t received or even seen any messages, but the rumor mill went into overdrive and their parents in the northeast urged them to come home, temporarily at least.

A lack of confidence in police, perceived racism against northeasterners — some of whom appear east or southeast Asian and are sometimes called “chinki” by other Indians — as well as political discord ahead of elections next year all contributed to the exodus.

The Indian government urged the northeasterners to stay put, as the exodus spread to Pune, Chennai and other large cities in the south and west where northeasterners work. Text messages were limited to five recipients to stop bulk messages spreading fear, a bar later raised to 20 recipients. India has around 750 million cell phone subscribers, the world’s second biggest market after China, and the government’s nationwide restriction seemed an over-reaction given that the exodus was confined to a few cities.

In a country of 1.2 billion people — the world’s fourth biggest economy measured in purchasing power parity terms — the government is worried about a recent economic slowdown. Growth is at its lowest since 2003, and foreign investors are complaining out loud about hazy rules and red tape. India feels it needs to nip any political unrest in the bud with foreign investment dropping by 78 percent year-on-year, according to June figures.

Apparently with public order in mind, the Indian government began blocking websites and pages said to contain inflammatory content, even as the exodus slowed.

Nishan Shah of the Bangalore-based Centre for Internet and Society said that the government is trying to figure out how best to react to the transition from an era when news and information was carried via broadcast and print.

“In the older forms of governance, which were imagined through a broadcast model, the government was at the center of the information wheel, managing and mediating what information reached different parts of the country. In the [peer-to-peer] world, where the government no longer has that control, it is now trying different ways by which it can reinforce its authority and centrality to the information ecosystem. Which means that there is going to be a series of failures and models that don’t work,” Shah told PBS MediaShift in an email.

However, for a country that has long styled itself as the world’s biggest democracy, and is home to some of the world’s biggest selling English language newspapers, the last few days have seen the government take a forceful line against Internet giants such as Google and Facebook that some feel threatens freedom of speech.

The text messages were said to be from some of India’s 170 million or so Muslim population, the world’s third largest after Indonesia and Pakistan — and the Indian government at first sought to blame Pakistan for fomenting the exodus by whipping up anger among India’s Muslims.

Following the text restrictions, Indian authorities blocked what they describe as “incendiary” and “hate-mongering” content on websites in Pakistan and Bangladesh that they say spurred the northeast fighting — including images of the 2010 Tibet earthquake passed off as images of Burmese Buddhists after attacking Burmese Muslims — and asked Google and Facebook to remove the content.

However, news reports on the exodus, as well as other coverage of Muslim-Buddhist clashes in Burma, were blocked. Among those affected were Doha-based news agency Al-Jazeera and the Australian Broadcasting Corporation (ABC). And stories on sectarian fighting in Arakan in western Burma — where Buddhist Arakanese have clashed with Muslim Rohingya, with the flare-up catching the attention of Islamist groups elsewhere, including India — were blocked in India.

ABC said on Friday content that “in relation to the particular blocked ABC, we are surprised by the action and we stand by the reporting.”

An April 2011 law says that the government must give 48 hours before blocking pages, as well as an explanation for the block in each individual case, though this can be sidestepped in an emergency. “Every company, whether it’s an entertainment company, or a construction company, or a social media company, has to operate within the laws of the given country,” said Sachin Pilot, minister of state in the Ministry of Communications, speaking about the recent restrictions.

There’s more to the back-story than just the 2011 IT law, however. Prior to the recent exodus from Bangalore and the government reaction, Google and Facebook were facing charges for allegedly hosting offensive material.

A Google spokesman, speaking by telephone from Singapore about the Indian government’s recent blocks, said that the company abides by the law of the land, in India and elsewhere. “We also comply with valid legal requests from authorities wherever possible, consistent with our longstanding policy,” he said.

All told, 80 million to 100 million Indians are online, and India has the world’s third biggest number of Facebook users, at 53 million. But, that just makes up just 4.5 percent of the country’s population.

Some commentators see the government as oversensitive. For example, using the pushback to put a block on an account parodying the country’s prime minister.

Twitter has 16 million accounts in the country. By Friday, a stand-off between New Delhi and Twitter saw around 20 Twitter handles blocked by Indian ISPs, on the orders of the government, with threats that the government could block Twitter completely.

The hashtag #GOIblocks gets about 10-12 tweets per minute — going by a quick scroll-through — from users protesting the government’s measures. However, caught up in the dragnet so far are accounts with little apparently to do with the Bangalore exodus. The Indian opposition said the blacklist is partisan, while other commentators see the government as oversensitive, using the pushback to put a block on an account (@PM0India) parodying the country’s prime minister, for example.

Adding to the irony, though it is not clear whether this was by accident or design — the Twitter account of Milind Deora, the country’s minister of state for communications and IT, and a vocal proponent of the recent blocks, was taken down by Twitter for 12 hours before being restored — along with an apology by Twitter on Saturday.

This story has been altered to correct the date of India’s independence day.