In Burma, a Delicate Balance for New Freedoms of Speech 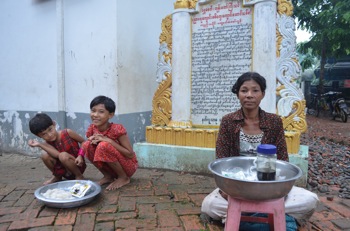 Arakanese made homeless by recent sectarian fighting in Arakan state, pictured sheltering at a Buddhist monastery in Sittwe, the regional capital, in June 2012. Photo by Simon Roughneen.

BANGALORE — The weekend before last, black-clad Burmese journalists took to the streets of main city Rangoon to rail against the suspension of two local newspapers by the country’s censorship board.

An estimated 300 protesters wore black T-shirts with the logo “Stop Killing the Press” after The Voice Weekly and The Envoy were suspended for not submitting stories for pre-publication scrutiny, a legacy of the bad old days of arbitrary rule that government has said will soon be history.

We are also concerned that even if the media law includes liberal provisions, they will be trumped by the various other draconian laws on the books." -Shawn Crispin

The Voice Weekly was curbed due to an article about a rumored cabinet reshuffle which it published without the censor’s go-ahead. “It seems the censor board is flexing its muscles to remind everyone they are still there,” said Sein Win, editor of Mizzima, another newspaper.

The protest and other related developments show how finely-balanced emerging press and speech freedoms are in Burma. In a sense, that the protest was allowed to take place at all shows that Burma’s reforms are giving people at least more leeway to publicly voice their opinions, and notably, the suspension has since been lifted, in response to the protestors.

But then, on August 10, another reminder that old regime ways die hard: The government announced a new press council, to be staffed by officials, rather than journalists. This means the council will be a government entity rather than a self-regulating media body as is often the case with press councils in other countries.

Elsewhere, new-found freedoms have allowed old tensions between some of Burma’s dozens of ethnic and religious groups come to the fore.

TWO STEPS FORWARD, ONE STEP BACK

Before a civilian government took office in March 2011, replacing the former military rulers, there was no chance such a protest would take place — or if it did the demonstrators would have been arrested, put through a show trial, and possibly given lengthy, trumped-up jail terms.

The government is civilian in name only as it is made up of mostly former army cadres and backed by various legislatures featuring almost 80 percent army or army-backed lawmakers.

Nonetheless, the government has made numerous changes over the past year, such as freeing hundreds of political prisoners and allowing free and fair by-elections on April 1, during which famous opposition leader Ang San Suu Kyi won a parliamentary seat. Last week, the government even funded commemorations of the August 1988 student protests against the then-government, demonstrations which resulted in the army killing an estimated 3,000 civilians.

Prior to the recent, mostly informal relaxation of media freedom, the newspapers in question could not have ran anything critical of the government or even published something as seemingly innocuous as a photo of Aung San Suu Kyi.

But the latest suspensions are a reminder that the Burmese government can still apply the letter of the law if it so chooses and that draconian laws curbing freedom of expression remain on the books.

Shawn Crispin, southeast Asia representative of the Committee to Protect Journalists, said, “We are also concerned that even if the media law includes liberal provisions, they will be trumped by the various other draconian laws on the books, including the Electronics Act, that have historically been used to threaten and jail journalists.“

With press freedom curtailed in Burma in the past, many journalists fled abroad, running news agencies from Thailand or India. One, Kheunsai Jaiyen, heads the Shan Herald agency, focusing on affairs in Shan state, a narcotics-producing region of Burma bordering northern Thailand.

Some of Burma’s exiled press, like Mizzima, have returned to the country.

“For years we had to operate inside Shan state incognito,” he recalls. “Now it is easier since the regime makes a show of opening up.”

Some of Burma’s exiled press — such as Mizzima — have opened offices in Burma in recent months, while others are mulling whether to establish a presence at home, pending finalization of the new press law, which will see the end of the government censors, according to the government itself. Kheunsai Jaiyen said, “We have yet to decide whether we will register officially in Burma.”

In June, deadly riots between Buddhist Arakanese and Muslims, mostly Rohingya, took place in Arakan in the west of Burma.

Many Arakanese and other Burmese regard the Rohingya as illegal immigrants from Bangladesh, calling them “Bengalis” and worse. State-run media published the word “kalar” to describe the Rohingya, something akin to a U.S. newspaper using the word “nigger” in a news report.

“Illegal Migrants Bangali/Rohingya People are Never and Forever cannot count in Eyhnic People of Burma Nation, ever they are legal or illegal” ran one such comment, posted anonymously under a news article about the issue in The Irrawaddy, a Burmese news magazine run from northern Thailand.

With Internet access in Burma slowly expanding and — for those who can afford it or put up with glacial download speeds — access to the likes of Facebook and Twitter no longer blocked, freedom to say what’s on one’s mind has taken a nasty turn.

Burmese at home and among the millions of diaspora scattered across southeast Asia, Europe and North America have taken to issuing diatribes about the Rohingya, with even former political prisoners under the old military junta taking to praising the current government and using ominous sounding nationalist and security justifications for supporting clamping down on what many describe as “so-called Rohingya.”

In the meantime, the Rohingya issue has attracted the attention of Muslims overseas, including militants such as the Pakistani Taliban and Abu Bakr Basyir, currently in jail in Indonesia for funding terrorism. Online, doctored photos purporting to support unverified claims of a “genocide” of Rohingya have appeared and Rohingya or foreign backers have fired out some splenetic pages and posts in turn.

“There are weaknesses in both domestic and foreign reporting. Most of the local news coverage is emotional, with a strong sentiment of patriotism,” Sein Win said, hinting at the need for greater responsibility and balance in Burma’s partly free press.

UPDATE (8/23/12): As Burmese journalists await a new media law, which is yet to go before the country’s army-dominated parliament, the government announced on Aug. 20 that newspapers would no longer have to submit content to the censorship board prior to publication. However, the 1962 media law remains in place, as does the 2004 Electronics Act – under which journalists and others were jailed for sending emails deemed detrimental to national security. As this primer by The Irrawaddy puts it: “Editorial staff at journals are required to follow 16 guidelines towards protecting the three national causes — non-disintegration of the Union, non-disintegration of national solidarity, perpetuation of sovereignty — and ‘journalistic ethics’ to ensure their stories are accurate and do not jeopardize national security.” So, just another small step toward press freedom in Burma.