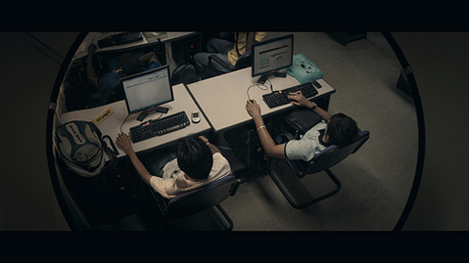 Russia's new Internet bills nominally limit children's access to the web, but will actually impact adults as well. Photo by "Al Ibrahim on Flickr":http://www.flickr.com/photos/crazysphinx/4475786680/ and used with Creative Commons License.

Russia’s State Duma has passed a number of new laws in the past week, all seemingly aimed at reining in civil society and criticism of public figures. The bills would re-criminalize defamation and impose limits and labels on NGOs. They follow last month’s introduction of excessive fines for unauthorized protests.

One of this week’s bills, Duma Bill 89417 is a proposed Internet statute that, among other provisions, would create a blacklist of websites that all Russians Internet service providers (ISPs) would have to block and refuse to host. The bill was hurried through the legislature in one week. (The defamation bill was approved today in the Duma’s third and final reading; jail terms were eliminated from an earlier draft, but fines were allowed to reach as high as 5 million rubles or about US$153,000, news reports said.) Both bills now await President Vladimir Putin’s signature.

Russia's compulsory prohibitions suffer from many of the same problems as the current U.K. system -- enforced secrecy, arbitrary blocks, technical challenges, and a limited effect on child pornography."

Bill 89417 demonstrates everything that is wrong with this flurry of new legislation. Rather than fixing old legal problems, as the government claims, it exacerbates them, and when compared to other countries’ laws, it demonstrates just how much Russia is diverging from accepted international norms of human rights.

The new law ostensibly fixes flaws in a previous media regulation bill. At the very end of 2010, the Duma passed Law 436-FZ, which required all “information products,” including Internet-hosted material, deemed unsuitable for children to be marked with visible warnings. The law was due to take effect on September 1, 2012.

Internet technologists had warned that 436-FZ was too broad, and would require individual comments and home pages to be marked with age-appropriate ratings in the style of American movies. The new law supposedly corrects this. It amends the law to exclude the majority of Internet content, although still requires “online publications” to give ratings. The term is ambiguous, but apparently includes online news services.

The amendments also include the creation of a centralized blacklist of websites. After criticism from Prime Minister Dmitry Medvedev, among others, the criteria for being included on the blacklist has been narrowed — it is now specifically tied to child-safety related content, including child pornography, material encouraging drug use, and suicide advice. Which sites should be placed on the blacklist, however, is to be solely determined by a new Russian agency, with no further oversight. Under a separate exemption, the Russian courts can place sites on the registry without limit, provided their content is “banned in the Russian media.”

As with its predecessor, the new bill creates more questions and opens more loopholes than it addresses. Will the blacklist be secret? If so, how will blacklisted websites be able to appeal their status (which, according to the law, is only an option within three months after introduction)? If websites do not appeal within the three-month timeframe, will they remain on the blacklist permanently? Will sites that do not contain age ratings be subject to bans by the courts? Will that include foreign news sites that may be unaware or unwilling to comply with Russian labeling requirements? Will a single page be sufficient to ban an entire site or IP address? How will sites be reported? Will it be possible to trigger a ban by maliciously injecting prohibited content into vulnerable sites? If such content is removed, will the ban remain?

If Russia’s lawmakers are seeking to imitate other countries’ laws in the area of child protection, they have failed to learn key lessons. Russia’s version of Wikipedia was one of the largest sites to protest the new law. A similar, albeit voluntary, blacklist in the U.K. led the U.S. version of Wikpedia to be blocked by some ISPs in that country following the reporting of a single Wikipedia-hosted image. In the United States, the 1996 Communication Decency Act included provisions that would criminalize the distribution of obscene content to children, but these were overturned by the U.S. courts as creating unconstitutional limits on Internet expression.

Russia’s compulsory prohibitions suffer from many of the same potential problems as the current U.K. system — enforced secrecy, arbitrary blocks, technical challenges, and a limited effect on the actual issue of child pornography. It carries with it the same widespread impact on Internet expression that may be child-unfriendly, but is otherwise vital to an open society — including the free reporting of adult matters. Add to that the dangers of handing such power to censor the Net to a centralized and unaccountable government agency, allied with an administration increasingly unfriendly to dissent, and you are left with a law that will do little good, and probably much harm.

Politicians like Medvedev have pointed to uncensored Internet as proof their country respects a free press. That Russia will so quickly abandon such a standard shows how fragile its respect can be.

Photo of President Putin by World Economic Forum on Flickr and photo of child by Décio Telo on Flickr. Both are used with Creative Commons license.