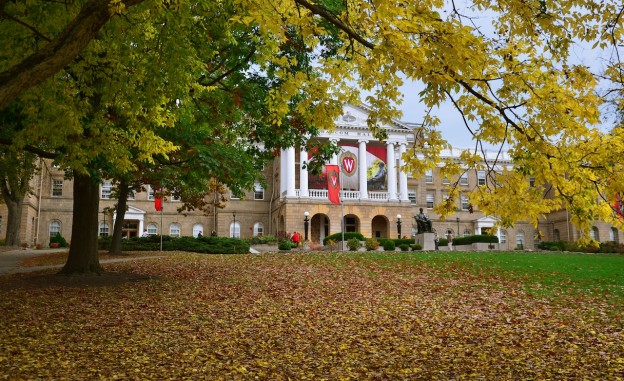 Universities have embraced different forms of collaboration to foster journalism innovation. In Wisconsin, the University of Wisconsin-Madison's "School of Journalism and Mass Communication":http://journalism.wisc.edu/ and the "Wisconsin Center for Investigative Journalism":http://www.wisconsinwatch.org/ (WCIJ) have teamed up and won awards. Photo courtesy of Richard Hurd via Flickr.

When winners of the Associated Press Media Editor (APME) Journalism Excellence Awards were announced earlier this month, “collaborative innovation” was a winning theme. The investigative journalism collaboration between the University of Wisconsin-Madison’s School of Journalism and Mass Communication and the Wisconsin Center for Investigative Journalism (WCIJ) was honored with the first ever Innovator of the Year for College Students award.

Investigating Big Stories Side by Side

Since 2009, the WCIJ and UW-Madison’s journalism school have worked together through both classroom support and paid internships to produce award-winning investigative reporting and train a new generation of investigative journalists. An independent non-partisan, non-governmental organization, the WCIJ has produced stories used by 200 news organizations nationwide, reaching an audience of more than 18 million people.

WCIJ is housed directly in the UW-Madison journalism school, providing a fertile environment for mutual learning and idea generation. Under the leadership of faculty members like Pulitzer Prize-winning professor Deborah Blum and professional staff from WCIJ, UW-Madison journalism students engage in major reporting projects, investigating important topics such as the frac sand mining surge in Wisconsin and the reality of human trafficking in the state. Students also tackled national issues in their report on the state of homeland security in the post-9/11 decade, which won first place at the 2012 Milwaukee Press Club awards.

One of Wisconsin Watch’s big stories was on the frac sand mining surge.

“A [WCIJ] staff member works with the instructor and directly with the students in applying the most current techniques to real stories of public importance,” UW-Madison professor Jack Mitchell told me in an email interview. WCIJ staff offer their assistance the whole way, helping students put stories through an intensive fact-checking and editing system, prepping for publication to various outlets.

“This is a smart and innovative way for a journalism school to lead investigative reporting,” said the APME judges in a statement. The judges were Carol Hanner, managing editor of the Winston-Salem (N.C.) Journal, Chris Cobler, editor of the Victoria (Texas) Advocate, and Jim Simon, assistant managing editor of The Seattle Times.

Innovating as a Student Intern

Amy Karon completed a master’s degree in journalism at UW-Madison while working as a WCIJ intern and contributed to several high-impact reports along the way.

WCIJ’s “collaboration with UW-Madison enabled me to complete a year-long reporting internship there that I found to be one of the most rewarding aspects of my journalism training,” Karon said via email. Karon helped WCIJ report, write, and produce an investigation on the gaps in student mental health services at 13 UW campuses. Her contributions included a detailed interactive map created with Google Maps and Google Fusion Tables.

Karon and classmates also helped WCIJ produce the Walker Calendar Files project, which consisted of much computer-assisted analysis. In this process, they digitized files for analysis and created data visualizations probing how the Wisconsin governor responded to escalating efforts to recall him from office. The coverage was picked up by numerous Wisconsin outlets, iWatch News, and the Huffington Post.

The UW-Madison and WCIJ partnership was not the only college journalism collaboration honored at the AMPE Awards. The Center for Innovation in Media at Middle Tennessee State University received an honorable mention in the Innovator of the Year for College Students category for its own take on collaboration.

One semester ago, the Center for Innovation embraced a “converged newsroom” model in which student news managers and reporters gathered daily to discuss coverage and budget issues. As a result of this change, a new culture is already emerging and quickly fostering a more innovative environment. For the Center’s director, Stephan Foust, the most profound change involves the process of finding and developing content.

“In our old world, when student media organizations were in separate facilities and buildings, there was virtually no interaction among them,” Foust said in an email interview. “Because of understandable competitive instincts, a good story might initially remain an exclusive in the hands of one organization or another.”