What Hollywood Could Learn from the New York Metropolitan Opera 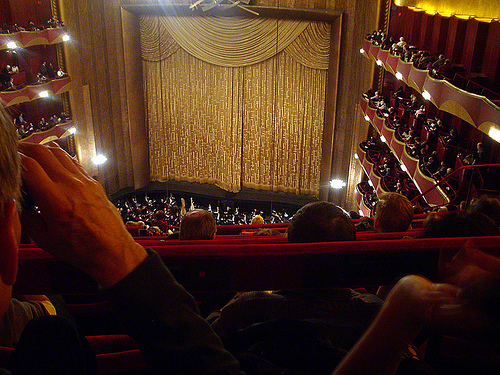 The New York Metropolitan Opera now fills seats in both the opera house and at home. Can Hollywood do the same? Photo by "oriateka on Flickr":http://www.flickr.com/photos/oriateka/.

If someone were to have told you a few years ago that New York’s Metropolitan Opera would become a model for digital innovation, you would probably have laughed.

Yet, that is what it has become. You might say that the Met is now laughing a bit itself — all the way to the bank.

The Met realized it had a problem to solve. How could it reach more paying customers than its opera house could hold? To solve it, the Met had to rethink its entire tradition and make a large conceptual leap."

Now, Hollywood would be wise to take note.

A few years ago, the Met decided to distribute some of its live performances in HD to movie theaters equipped to handle digital transmission and exhibition. For the first time, an opera lover did not have to be physically present at the Metropolitan Opera’s own facility to experience a live performance.

The Met decided to blow up its traditional business model, and by doing so, potentially endanger its core product.

If someone could see the performance in a movie theater at a much lower cost, why would they ever bother to come see it at the Met itself?

As a New York Times article reported, “The Met’s televised broadcasts now reach 1,600 theaters in 54 countries. The HD audience is nearly 3 million a season, compared with 800,000 at the opera house.” The Met generated “$11 million in profits last year from its HD movie theater transmissions, which had been operating for only five years.”

And the number of theaters showing Met performances continues to expand as more theaters become equipped to serve up HD performances all over the world.

And by the way, fans still flock to see the Met in its live version.

As Steven Johnson says, in his excellent book “Where Good Ideas Come From“ the Metropolitan Opera found the “adjacent possible … a kind of shadow future, hovering on the edges of the present state of things, a map of all the ways in which the present can reinvent itself.” He adds:

Good ideas are not conjured out of thin air; they are built out of a collection of existing parts … Some of these parts are conceptual: ways of solving problems … Some of them are, literally, mechanical parts.

The problem to solve

The Met realized it had a problem to solve. How could it reach more paying customers than its opera house could hold? To solve it, the Met had to rethink its entire tradition and make a large conceptual leap.

Fortunately, it also had the “mechanical parts” — the web and its assorted technologies.

My guess is that the Met has only begun to discover the potential of this new audience because it uses a medium that can do more than deliver a direct broadcast. All of these theater locations also have the capability of communicating with the central location and with each other.

Through these HD broadcasts, opera lovers all over the world can be involved in a large, interactive community. They can immerse themselves further in the content itself by interacting with the stars, the behind-the-scenes teams, opera experts, and significantly — with each other.

Is Hollywood working to find its “adjacent possible?” No.

It took years to create and finally launch UltraViolet, a service that provides a digital copy of a movie for people who buy it on BluRay. Under this plan, when you buy a physical disc, you qualify to get a digital copy that’s held in the cloud for you and allows you to play it back on multiple devices. (UltraViolet has also made digital locker copies available to customers of VUDU, a streaming service now owned by Walmart — which is the largest seller of DVDs in the country, as well as Paramount Movies.com.)

Conceptually this is a misstep. UltraViolet is designed to protect a business model built on the sale of a physical product that is currently a high-margin business for the studios.

Selling physical discs is a dying business. To encourage or even require someone to buy a disc in order to get a digital copy of the same movie is ludicrous.

Hollywood should take a page from the Met playbook and do the following:

2. Be prepared to blow up its current business model.

3. Provide an easy way for consumers to access a low-cost version of its product, (without having to buy the high-cost version).

4. Immerse people in its entertainment experience and enable them to connect with each other.

In other words, find the future more quickly and quit trying to prop up the past.

Chris Dorr is a digital media consultant. His clients include MTV Networks, Samsung Electronics of America and the Tribeca Film Festival. He can be followed on Twitter @chrisdorr. A version of this post first appeared on The Future of Film blog.