An Actor’s Life in the Digital Age: Trying to Make New Media Pay 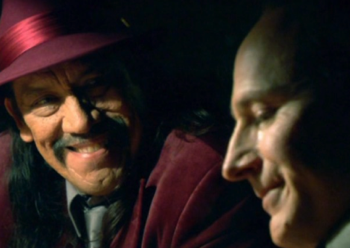 Danny Trejo (left) and the author and actor Gary Moore (right) in "The Bill Collector," which is now streaming on Netflix.

I went to my first movie at 4 years old: “Mary Poppins“ at the Sycamore State Theater in Sycamore, Ill. It was one of those large theaters with lots of character about it. Beautiful blue lighting glowed along the ledges and pointed to the lavish velvet curtains that surrounded the screen. Dick Van Dyke, who played Bert in the movie, danced, sang, and acted so well that I got completely lost in the story.

Things have changed pretty dramatically for actors since the days of Dick Van Dyke in “Mary Poppins.” I never dreamed that one day any of us could watch that movie on our cell phones. Or that so much of a character actor’s work would be auditioned from long distance and viewed on tablets, computers and phones.

Approximately 80 percent of all my auditions over the past two years have been recorded in my studio and edited on my computer. Then I send them off either to my agent or directly to a casting director."

This year, I was at an awards show in Beverly Hills and saw Van Dyke coming down the stairs. I asked him if I could get a picture with him and told him that his performance was the inspiration for what has become a lifelong career in acting. He smiled like he’d heard that one before, but he was kind and just as engaging in person as he is on screen.

When I was 5 years old, my family moved closer to downtown Chicago. I trained as a stage actor at the Goodman Theatre. It wasn’t until I got married and moved to San Francisco that I decided to do some commercials, so I enrolled in a camera acting class with the great model/actor Jim Bressi, who at one time was the old Marlboro Cowboy. In a year, he brought me from broad stage acting to intimate camera acting. A stage actor has to project everything for the people sitting on the back row of the theater, whereas being in front of a camera is as intimate as talking to someone across the table. The microphones pick up the slightest sound, so there is no need to project your acting. Acting teacher Tony Barr said it best: “On the stage, you can give a performance. In front of a camera, you’d better have an experience!”

Today, I get my acting coaching from Eric Kline of the Film Actor’s Workshop in L.A., who can coach me via Skype while I’m on set sitting in my trailer. The training I’m now getting is how to meet the challenges of new media.

New media, by the way, is defined on the Screen Actors Guild – American Federation of Television and Radio Artists’ (SAG–AFTRA) website, as “independently produced original, made for new media (MFNM) entertainment productions that will initially be exhibited via the Internet, mobile devices or any other platform …”

More than 25 million people now stream with Netflix in the United States, Canada, Latin America, and the United Kingdom. There are other streaming providers like Hulu, Amazon, and even YouTube, which became the platform for my actor buddy Brandon Hardesty’s career to get started. I met Brandon while we were on the set of “The Bill Collector“ with Danny Trejo a few years ago. As I write this, “The Bill Collector,” and my acting career, are streaming on Netflix.

I am part of the new era of digital entertainment.

This new digital world has brought auditions to a whole new level of convenience for both actors and casting directors. Approximately 80 percent of all my auditions over the past two years have been recorded in my studio and edited on my computer. Then I send them off either to my agent or directly to a casting director. This process saves actors money; they no longer have to fly or drive to the location, purchase gas at ever-increasing prices, pay for wear and tear on their cars, or spend money on food and lodging at an out-of-town audition. Casting directors can now make their first cuts without having to bring 100 actors into the waiting room.

But new media projects come with challenges for actors. These days, I get my demo reel on all sorts of platforms, which is a great thing. But that has another side, too. With the multitude of platforms the Internet has to offer, we seem to be getting paid less for each gig. The new SAG–AFTRA union does have a new media contract, but I’ve rarely seen it used, mainly because I don’t think producers, actors and directors know exactly what’s considered “new media.” The new media contract says that the pay for actors under this agreement is as follows: “Initial pay is negotiable under the SAG New Media Agreement. There are no minimums under this contract; however, state and federal minimum wage laws still apply.”

Now, having no pay scale to start with is discouraging, but if that web series went to prime-time television and was a half-hour or longer, that actor would get paid approximately $2,400 (100 percent of the network ceiling). If an actor wants to risk small or no pay on a new media project, it may just pay off for him in the long run.

‘House of Cards’: A Case Study in New Media Acting

Kevin Spacey will star in the Netflix original, House of Cards. Photo from ScreenCrush

I was very pleased to be involved with a widely publicized new series from Netflix called “House of Cards,” directed by David Fincher and starring Kevin Spacey. It’s the kind of project that’s setting the scene for categorizing new media in the future. It’s not a typical new media contract, thankfully. And SAG–AFTRA realizes that the platforms for new media that are present today along with the higher budgets for them weren’t the same in 2008 when the agreement was negotiated.

The acting doesn’t change in the new media platform. “[Good] acting is responding to stimuli in imaginary circumstances in an imaginative, dynamic manner that is stylistically true to time and place, so as to communicate ideas and emotions to an audience,” Barr wrote in his book “Acting for the Camera.”

A poor film or TV show is still going to be hard to watch on a small screen, just as a great film like “Mary Poppins” will still be great on any platform you watch it on.

True, it’s not the old Hollywood, where even a good character actor could make a living without being a big name; but there are many more opportunities now, and an actor can either embrace the upcoming digital acting world of new media or shrink away and bow out. I would rather embrace it, and as Van Dyke’s Bert says, “You think, you wink, you do a double blink, you close your eyes … and jump!”

Gary Moore grew up onstage in Chicago. Although Gary has hosted an international TV show called “The Help at Home Live Show” for seven years, does voice-over work, and TV shows, his real love is film work. He has been on sets with the likes of Kevin Spacey, David Fincher, Ralph Winter, Donald Sutherland, Danny Trejo, Orlando Bloom, Colin Firth, Patricia Clarkson, Tim Conway, Mel Tillis, and his good friend Tom Lester, who played “Eb” from the hit sitcom “Green Acres.” Gary will next be seen in the feature “Jimmy“ with Ted Levine, and the upcoming U.S. release of “Return to the Hiding Place,” starring John Rhys-Davies.