Citizens Get Conflicting Messages About Their Right to Record 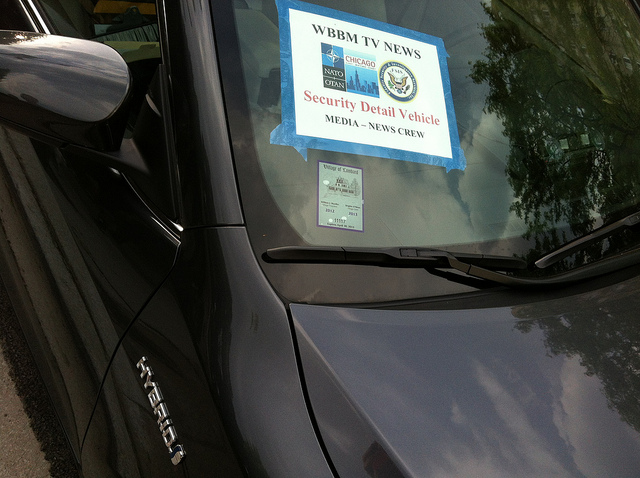 In Chicago, local station WBBM went so far as to hire a security detail for its journalists covering the NATO summit. Photo by Steve Rhodes on Flickr and used here with Creative Commons license.

This month, federal agencies and local officials sent two powerful but conflicting messages to the American public about our right to record.

On May 14, the Justice Department submitted a letter to the Baltimore Police Department providing in-depth guidance on citizens’ right to record. The letter was submitted as part of a court case that dates back to 2010. The plaintiff, Christopher Sharp, alleges that after filming the arrest of his friend in Baltimore, police confiscated his mobile phone and deleted the video.

A mobile phone is a First Amendment device, and our right to connect with people and record public events is fundamental to a functioning democracy. But we still have a long way to go to ensure those rights are protected."

And while the Justice Department’s letter “specifically addresses the circumstances in this case,” it was also clearly meant to send a message to police departments and municipalities around the country. The authors take pains to point out that the guidance contained within the letter “also reflects the United States’ position on the basic elements of a constitutionally adequate policy on individuals’ right to record police activity.” This important statement came just a week after digital rights and press freedom advocates sent a joint letter to Attorney General Eric Holder asserting that in a changing media landscape it is increasingly vital for the DOJ to protect everyone’s right to record.

It’s worth noting that the Baltimore police tried to do the right thing in response to Sharp’s lawsuit. The department issued a “general order” meant to educate and explain the public’s rights in regard to recording police activity. However, the Justice Department saw the general order as inadequate. In its letter, the DOJ offers six guidelines for police departments and argues that the right to record is essential to “promote public access to information necessary to hold our governmental officers accountable.”

The letter highlights a growing problem. While many police departments have policies in place for dealing with the press and conduct trainings on First Amendment and civil rights, the actions we have seen over the past six months suggest that something isn’t working. Indeed, after New York Police Department officers arrested nearly 20 journalists last November, Police Commissioner Ray Kelly told the force “not to unreasonably interfere with media.” And yet the following month, the NYPD arrested nearly 20 more journalists and detained or otherwise blocked others from reporting.

It’s no longer enough to treat these conflicts on a case-by-case basis. The DOJ letter is important because as the demographics of journalism change, conflicts between police and the press spike. With more freelance, independent and citizen journalists mixing with mainstream press in the streets and statehouses, we need to ensure that the First Amendment protects all forms of reporters. The DOJ has begun to provide leadership on this issue and is taking a step in the right direction.

Too Late for Chicago

Unfortunately, the letter did not come in time to change the policies and practices of the Chicago Police Department as protesters descended on the city for the NATO summit. Five days of protests left four journalists in jail and many others bruised and bloodied. While this hardly compares to the kind of press suppression we saw last year in New York City and Oakland, the tension between press and police were evident in other ways.

Reports suggest that police targeted a number of the livestreamers and citizen journalists who have been tirelessly chronicling the Occupy movement and subjected their homes and cars to pre-emptive raids. One such group of livestreamers included Tim Pool, whose work has been covered by Time, Reuters, NBC and others. Police pulled this group over at gunpoint and detained the journalists for an hour while searching their car. True to form, the livestreamers left their cameras running as long as possible and you can see video of their ordeal here.

Members of establishment media have also been threatened. Chicago police arrested one Getty photographer and hit another in the head with a baton during the weekend protests. Local station WBBM went so far as to hire a security detail for its journalists, a sight we associate more with international correspondents covering conflict zones. But after the arrests of more than 80 journalists, photographers and livestreamers at Occupy protests around the U.S., as well as violence from some protesters themselves, it is perhaps no surprise that journalists feel the need to hire private security.

The Scope of the Problem

It may not surprise us, but it should alarm us — and suggests the scope of the problem at hand. The arrests and harassment of people trying to record and document form an alarming pattern that’s not limited to Baltimore, Chicago or Occupy Wall Street. The DOJ response is an important development in the debate about people’s right to record and the central role of the First Amendment in an age of democratized media making. If there was any question that our Constitution protects people’s right to record police actions and civil unrest in public places, the DOJ letter should put those questions to rest. Realistically, however, we need more than a letter to head off this trend. We need a larger national discussion about our civil rights in a digital age.

A mobile phone is a First Amendment device, and our right to connect with people and record public events is fundamental to a functioning democracy. But we still have a long way to go to ensure those rights are protected.