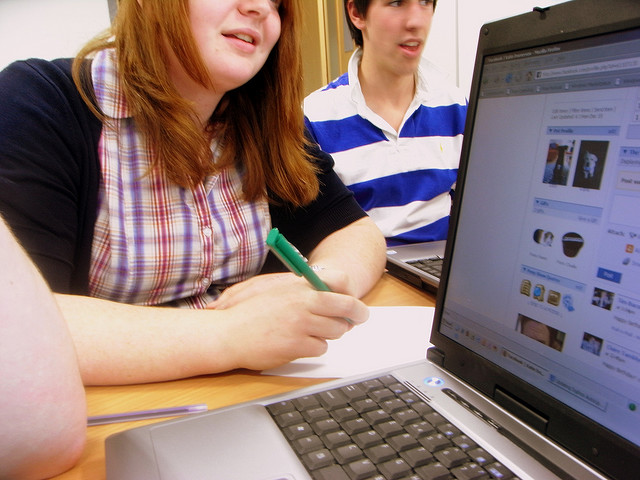 The explosive growth of online social media sites specifically targeted at schools has compelled Facebook to edge its way back into the fertile ground of college campuses. Last week, the company announced a new feature available only to students and faculty with an active .edu email address, Groups for Schools. It’s billed to be exclusive — even alumni and prospective students aren’t allowed in, limiting the scope of the groups and creating something that approximates the intimacy that was Facebook’s strong suit when it first launched.

Groups for Schools is meant to network students in the same university community for social or extracurricular events, but also includes elements that make it useful as a study tool, like the popular platform Edmodo and a number of other similar sites that have cropped up. It allows students and teachers who are members of a group designated to a particular class, for example, to share comments on a class discussion and reading, as well as to share class materials like notes, assignments and calendars, up to 25MB.

... just a week into its launch, red flags are already being raised."

But just a week into its launch, red flags are already being raised. One of the main concerns that has not been addressed by Facebook is the potential liability that students, faculty, and universities might face for file-sharing through Facebook. Many universities are already cracking down on file-sharing through school-owned Internet networks, and Facebook’s new tool adds yet another facet to the complicated question. Additionally, schools must consider intellectual property right issues. Facebook’s terms and conditions specify that is has a transferable license to use any content associated with Facebook. Would that be the case for student-produced work? Facebook has not updated its terms and conditions to reflect the new product, so that remains to be seen.

Another complaint is that by creating Groups for Schools, Facebook is undermining apps already built by partner developers, like Inigral, which markets itself as a way for universities to increase enrollment and retention through social networks that meet student needs. Now Groups for Friends will offer almost the same service. Inigral founder Michael Staton says the company isn’t too concerned about Facebook’s new product because the more students communicate with one another, the better it will be for their business. But there is a sense that Facebook is an unwieldy landlord, who doesn’t pay much attention to the innovations of others that use its platform.

Another criticism of Groups for Schools is that it doesn’t inspire the kind of online discussion other education-related social media sites do. When Facebook tested the product at Oberlin College, a small liberal arts school in Ohio, for example, the students simply weren’t active in groups that formed — in some groups, the creator was the sole member, according to an e-campusnews article. One theory behind the flop at Oberlin is that Facebook is an escape for many students and they’d prefer to keep it unconnected to their academic pursuits.

One very noteworthy aspect of the new Groups for Schools is that it loosens the privacy settings so that any Facebook user with an .edu email address that corresponds to the individual university can be messaged. On the rest of Facebook’s network, two users must be “friends” to exchange messages. While the new looseness in privacy settings might work out fine at a small school like Oberlin where people might even know each other in person, it could be more disconcerting at a larger school like University of Washington or Texas A&M, where much of the student body is just as much a stranger as any other random Facebook user.

Groups for Schools is still rolling out and will eventually be available at higher education institutions across the globe.