What Journalists Can Learn About Collaboration From Improv Comedy 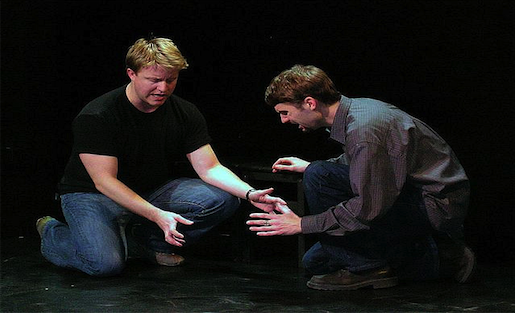 Making it up together: improvisers Mark Chalfant and Dave Johnson. Photo by Flickr user "Jaime Fearer":http://www.flickr.com/photos/wageslaves.

Did you hear the one about the journalist who used improv skills to do her job better?

It’s no punchline: The art of improv offers many lessons for journalists, not least of which is how to collaborate more effectively.

When it comes to journalistic collaboration, the inherently collaborative art of improv has much to teach."

I’ve been performing improv since 2004, and in 2010 I started teaching workshops that apply lessons from the art of improv to life and work. I’ve also managed several journalistic collaborations, and I’ve observed a number of ways in which my colleagues in media might benefit from the tools improvisers use.

What Could Improv and Journalism Possibly Have in Common?

In an improv show, two actors take the stage. There’s no script. One of them says something; the other responds. They are collaborating to create a scene, or story, on the fly, and if they collaborate effectively, that scene will knock people’s socks off — prompting audience members to say, “They must have rehearsed that!” If instead the actors jockey for position, trying to outdo each other with jokes and cleverness — well, then, chances are, they’ll look like a couple of clowns. Their scene, and ultimately their show, will fall flat — and believe me, plenty of improv shows fall flat! But the improv shows that work? They’re hilarious, truthful send-ups of human behavior — live displays of creative genius, more compelling to me than the best production of a scripted play or stand-up act.

(Note, the following video contains colorful language that some may find offensive.)

Now think about your work as a journalist. You’re also creating a story, often under extraordinary deadline pressure. Unlike an improviser, you aren’t making it up (ahem), but you’re still reliant on other people (sources, or fellow journalists) to help you build a narrative — to fill the blank page. And if you’re part of a formal collaborative project (as more and more journalists are), then you are definitely being called upon to create something with other people, just as improvisers create together each and every night in dank bar basements across the land.

So here’s the good news: To the extent that journalism is like improvisation, you can borrow the core tools improvisers use to help you practice journalism more efficiently and effectively. And when it comes to journalistic collaboration, the inherently collaborative art of improv has much to teach.

An actor takes the stage. He says, “Boy, it’s hot out here.” “No it isn’t,” the other actor responds. We’re now two lines into the scene, and we know nothing about our characters or their circumstances; all we know is that the actors can’t agree. If instead, actor No. 2 responds, “It sure is” — well, then we know it’s hot out … but we’re probably pretty bored. Two people agreeing it’s hot outside doesn’t exactly make for riveting theater. If, instead of simply agreeing (saying “yes”), actor No. 2 says, “I know, it’s a heat wave — the dog just melted!” — it’s not necessarily comedy gold, but at least something is happening. The scene has momentum.

That principle, of agreeing with the information your fellow performer establishes and then building upon it, is what we improvisers call “yes, and.” “Yes, what you say is true, and here’s some more information.” We use “yes, and” to go from zero to something in a matter of seconds.

“Yes, and” is a powerful tool for collaborators off-stage, as well. Say your newsroom is partnering with another organization to cover a particular story. You’re in a planning meeting. The reps from the other org are throwing out ideas you may or may not love. If you shoot each of their ideas down (either overtly or in a long-winded diplomatic fashion) — what will you have to show for your meeting, other than a list of things you aren’t doing? The goal is to make a plan — so ask yourself, how can I say “yes” to the ideas they’re putting forward, and then build upon them to steer the discussion in a constructive fashion?

This is easier said than done. Saying “yes, and” means letting go of the idea that you’re the smartest person in the room. It might feel anti-intellectual; in fact, it’s quite practical. In an improv scene, if you think you’re funnier and more talented than your scene partner, then you’re probably going to try to brush their ideas under the carpet, and push your own to the forefront. The irony is that instead of making you look like some kind of comedy genius — this just results in a confusing, or at least not very compelling, scene. If you instead accept that you can’t build a good improv scene alone, and that you need your partner, then at least for the duration of the scene, you commit to trusting and respecting that person. You treat everything they say as gold. You build upon it, instead of trashing it. And you create a better scene as a result. For people who care about such things — the audience probably leaves with a more favorable impression of you.

Similarly, as journalists, deciding to trust and respect your partners on a collaborative project opens up so many doors; by contrast, insisting upon the superiority of your own ideas just tends to keep doors hammered shut. Once you start treating collaborators’ ideas as worthwhile, and focusing on how to build upon these ideas, you start to get somewhere. Things start happening.

Listening is Hard. Do it More

Listening is obviously a critical skill for journalists. You need to listen closely to your sources, reading between the lines, to bring the truth to light. You need to listen to the community you cover — what they’re saying, and what they aren’t saying — to identify stories. It’s human nature to bring our own expectations to situations, but journalists — good ones, at least — know how to let go of expectations and allow a story to present itself.

But do you apply those same listening skills to colleagues and partners with whom you collaborate?

You can’t “yes, and” someone unless you really hear what they say. To be clear, listening in this context isn’t a matter of being polite — it’s about mining as much information as possible from the other person … paying extraordinarily close attention. Remember, in an improv show, the actors are making it up as they go — no script, no net. So everything another actor does or says becomes a critical building block for a scene. If the actors are in their own heads, thinking up clever ideas or dialogue, and they miss a fellow performer’s facial expression, or a physical tic, or the inflection in a line of dialogue — then they’ve missed a huge gift, one that could help clarify the scene and move it forward.

Similarly, if journalists don’t listen closely to their partners in a collaboration, they miss out on key information (implicit and explicit) that can strengthen the final editorial product. Again, this is about respect — we listen to people whose ideas we feel are worthwhile. So decide that your partners are worthwhile. This will open the door to a strong relationship, and strong relationships are the essential foundation on which every good collaboration is built.

A fellow improviser once said to me, “When I enter a scene, I pretend the other performer is Steve Martin.” Think of a journalist you most admire and pretend that’s who you’re working with. Everyone’s Edward Murrow.

Even if you’re working with Murrow, don’t be intimidated. Nervousness or excessive deference to your partner only stymies the creative process. The best improv actors respect their scene partners — they listen, they “yes, and” — but they also project a relaxed and confidence stage presence. This makes them fun to watch, and boosts the other actor’s relaxation and confidence. Relaxed, confident people who are listening to each other and building on each other’s ideas tend to create the strongest output.

Maybe you’re working with an organization whose work you really admire. Maybe you’re nervous that you aren’t experienced enough compared to other partners at the table to voice your ideas. This self-doubt is an obstacle to collaboration. To reference another improv maxim — play to the top of your intelligence. So many beginning improvisers are incredibly smart people who play really dumb people on stage, afraid to let the full power of their brains and creativity be on display. This does not make the show funnier. As much as you need to respect your partners, you need to respect yourself. Play your full hand. You aren’t doing anyone any favors by holding back.

So, what do you think? Ready to take an improv class? Maybe not, but I hope I’ve convinced you that improv has a lot to teach collaborators of all stripes, journalists included. Let me know in the comments.