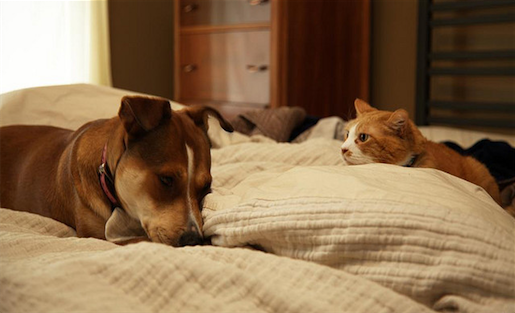 Other times, though, you see that two people or two organizations are in cahoots, and you think, “Seriously? Them?”

In my opinion, the richest collaborations often occur when you bring together unlikely partners."

That was my reaction when I saw that Harvard’s Berkman Center for Internet and Society was announcing a collaboration with the one, the only, Lady Gaga. Yes, the Lady Gaga, mistress of the meat dress. The alliance is born from the launch of L.G.‘s new Born This Way Foundation, whose mission is to empower youth and combat bullying; the Berkman Center’s role will be to compile anti-bullying research that will inform the foundation’s work. You can watch video of the foundation’s launch event here, and witness Gaga share the stage with Oprah Winfrey, Deepak Chopra and Harvard President Drew Gilpin Faust, among others.

How about a woman and the man who abused her collaborating on some funky musical remixes, as Rihanna and Chris Brown recently did? I’d call that strange. (Though I guess Tina and Ike Turner paved the way?) Or a rapper famous for his homophobic lyrics and a gay musical icon? (Eminem and Elton John at the 2001 Grammys). Find lists of more surprising musical collaborations here and here.

Outside the realm of pop culture, you’ve got Slick Willy and George Herbert Walker Bush coming together in the wake of Hurricane Katrina, and then again after the 2006 Tsunami. Political history, of course, is full of surprising alliances, formed whenever entrenched positions and ideologies suddenly seem less important than whatever is to be gained from working together. Take, for example, this recent story from the New York Times: “Flex-Fuel Amendment Makes Strange Bedfellows.”

In my opinion, the richest collaborations often occur when you bring together unlikely partners. I’m thinking of my time as editorial director of PBS.org, when I was in the fortunate position of hiring several editors. One woman I hired thought about things very much the way I did at the time. She was methodical, analytical. Later, I interviewed another woman, whose experience was perfect for the job — but her approach was very different than mine. At first, I saw this as a negative. Then I realized, in a moment of rare wisdom (I can’t stress how rare), that a different approach would make our team stronger. Team building 101.

The Dangers of a Bunch of Yes Men

As is so often the case, “The Simpsons” shows us the way, highlighting the dangers of surrounding yourself with yes men:

Mr. Burns: Where did I go wrong? I made all the right moves, didn’t I?

Mr. Burns: Oh, I see it now; you’re nothing but a bunch of yes-men. I was making all the wrong moves, and you were too gutless to tell me!

Burns’ Underlings: Yes, sir. Absolutely. Every move the wrong one.

Of course, diversity is harder to manage than homogeneity — it invites more risk, but the results have the potential to be so much richer, and more interesting. You need different personality types and work styles to create the alchemy from which magic can be born.

So how does this apply to journalism? Well, think of Bob Woodward and Carl Bernstein. Alicia Shepard, who wrote a book about the duo, called them “just polar opposites” in a lecture at NYU, and yet, she contended that together, “they created a super-reporter.”

What (or who) do you think of when you think of unexpected collaborations? I’m curious to hear your examples — they can come from journalism or any other field (the arts, tech, politics, food … you name it). In your experience, do surprising partnerships tend to yield quality results — or are the challenges of overcoming differences (in personality, values, what have you) too mighty to conquer?

In other words, should Collaboration Central start collaborating with TMZ? (I kid. Or do I …)