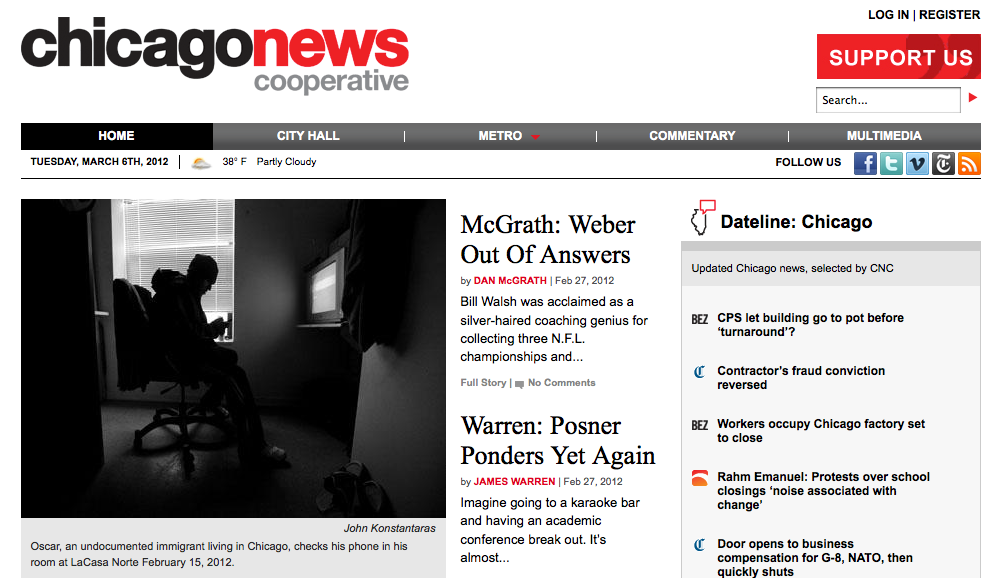 Chicago News Co-op, a 2-year-old non-profit news site, has announced it is suspending publication and re-evaluating its future.

While some of the factors in play are complex and not particularly well-explained by the CNC (read editor James O’Shea’s letter to readers), what we know so far about the suspension does appear to put into focus some key lessons for funders who are stepping into the news and information space:

We all knew a lot less about what would work just a few years ago, when MacArthur and other foundations decided to place big bets on experiments in public service journalism."

1. Demand significant focus on revenue development from day one

One rule of thumb is that a news site should be spending equal amounts on content and on revenue development. Many journalist-led sites are skewed heavily toward spending on content.

But that is changing across the field. MinnPost and The Texas Tribune, for example, are among those that have invested heavily in revenue development and are showing results.

In his letter, O’Shea said the “CNC never raised the resources to make investments in the business side of our operation that would have generated the revenue we needed to achieve our original goal — a self-sustaining news operation within five years.”

That’s a choice. With a more than $1 million investment from the MacArthur Foundation alone, certainly CNC had the option of investing more in revenue development and less in content.

News startups do need a runway of at least several years to stabilize, and foundation support is critical in the early going.

But they must also expect to create multiple revenue streams that enable a reduction of foundation funding.

Donors large and small are one source. Sites that are successful in engaging their communities in ways that include and go beyond traditional journalism may have an edge in raising donations. That seems to be the case for the St. Louis Beacon.

Don’t overlook earned revenue. New Jersey Spotlight, also about 2 years old, focuses public affairs reporting in state government. It is raising nearly a third of its $600,000 annual budget from earned sources — mostly by staging conferences about important topics it covers, according to Hans Dekker, CEO of the Community Foundation of New Jersey. Unlike the News Co-op, the site is not a non-profit. It’s an LLC owned by the foundation, and Dekker says that helps underscore the importance of it acting like a business.

That foundation, with matching funds from the Knight Community Information Challenge, provided seed funding. And the New Jersey foundation has insisted from the outset that the staff focus on revenue.

Dekker is quick to note that the Spotlight isn’t yet financially stable or sustainable. But its progress suggests one blueprint for other public affairs journalism sites.

“Getting Local,“ a recent report from the Knight Foundation (I co-authored it), underscores the need for sites to wean themselves from foundation funding:

“Most sites relied heavily on foundations or large donors or both to get started, but have since experimented, with varying degrees of success, with multiple revenue streams, including membership, advertising, events and sponsorships.”

In addition to its foundation funding, the CNC was deriving revenue from a content partnership with The New York Times. Last Monday and again on Thursday, I asked O’Shea how much revenue derived from that and other sources, but I did not receive a response.

It is safe to say the content partnership is a small amount — The Texas Tribune and The Bay Citizen have similar agreements, and they reported less than 1 percent of total revenue from the Times in 2010.

3. Understand that failed experiments have value and require documentation

The MacArthur Foundation stepped up in a big way to support CNC, and I commend that.

We all knew a lot less about what would work just a few years ago, when MacArthur and other foundations decided to place big bets on experiments in public service journalism.

Even when individual projects don’t succeed, we learn more about what won’t work and what might. That’s an important contribution to the field. Making detailed documentation a grant requirement may be in order.

MacArthur has been a significant funder of journalism, and it may well have imposed some of the requirements I suggest here in funding the CNC.

Despite CNC’s problems, Elspeth Revere, vice president of Media, Culture, and Special Initiatives at MacArthur, said the foundation “is committed to continuing our 30-year history of support for non-profit journalism, because informing the American public matters as much now as it ever has.”

Another factor for the CNC was questions about its status as a 501c3 non-profit institution. The IRS has been scrutinizing applications for non-profit status for some news startups.

O’Shea cited this factor in his letter to readers, but did not explain it.

“The decision to suspend operations was motivated by some complex factors and unresolved questions regarding our tax status and a change in circumstances that triggered questions about the economic wisdom of commitments between the CNC and the New York Times. Frankly, the situation is too complex to discuss in any detail in a note like this,” he said.

Be that as it may, the tax status problem and any issue with the content partnership may simply have precipitated the inevitable.

A 2-year-old site that is still highly dependent on a single funder probably isn’t destined to grow legs and march into sustainability.

It’s important to remember that the startup sector has a high failure rate — the demise or downsizing of a site does not mean the broader field is failing. The timing could be poor. It might be the wrong market; it might be a failure of execution rather than of an idea. It helps the field when failure is turned into learning.