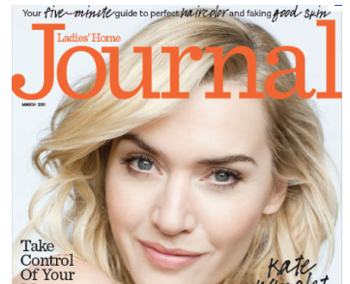 The new look of the crowdsourced Ladies' Home Journal, starting in March.

In 1900, Ladies’ Home Journal published an article containing predictions for the year 2000. Though some of the author’s predictions were accurate — Americans are indeed taller, and photographs are now sent around the world — one key point was missing. The author didn’t imagine that in the new millennium, the very magazine that published his predictions would no longer be written entirely by professionals, and instead would use technology to gather stories from everyday people.

Ladies’ Home Journal is now venturing into this mostly unknown territory. Starting in March, rather than rely solely on professionals to write articles, editors will work primarily with readers who have submitted their work for consideration.

"I'm reading stories that would stand up to any professional writer. Some people have a way of expressing themselves that is very true and clean and unsullied by magazine-speak." -Sally Lee

With a paid circulation of nearly 4 million, the Journal’s experiment is the first time a major magazine has embraced reader-generated content in such a serious way. Editor-in-chief Sally Lee said the approach will bring fresh voices to the 128-year-old publication, reinvigorating regular readers and attracting new ones to join the magazine’s community.

Lee explained that there are several ways readers will be able to submit their work for publication in Ladies’ Home Journal. One is by tagging a story they’ve sent into DivineCaroline.com, which consists of “real voices [combined] with guided editorial and the dynamism of an online community.” DivineCaroline is also owned by the Journal’s parent company, Meredith.

Additionally, as part of a new redesign of the print magazine, Journal readers will see “calls to action” marked by distinctive icons that show where photos, stories or comments can be submitted in response to magazine content. The redesigned cover will feature the word “Journal” more prominently to reinforce the concept. Readers whose work is accepted for publication will be compensated like the magazine’s professional writers.

“We know that our readers really are very excited about this, that they really value this self-expression and want to be heard,” Lee said. As an example, she described the results of a recent essay contest sponsored by the magazine that garnered 3,000 entries for possible publication in the Journal (1,000 beyond what she initially reported in her February editor’s letter).

Lee said Meredith’s research into this reader-generated approach showed that readers felt comfortable with the idea of publishing their personal stories in the Journal. Their impressions of the magazine were that it was “trustworthy, authoritative, [with a] deep moral code,” and that it offered the right kind of “nurturing and supportive environment” for telling even deeply personal stories, she said. Readers felt a stronger sense of identification with stories written by “women just like them.”

Though Ladies’ Home Journal has clearly established a strong identity among its readers over its long history, Lee isn’t concerned that the coherence and consistent editorial voice of the magazine will be lost as it ventures into crowdsourcing.

“Coherence comes from many different measures,” she pointed out, including the unifying design features of the magazine and the tone of its stories. The magazine will also still include some content from professional writers and experts.

Readers told Meredith researchers that the magazine’s reader-generated content felt like “the kind of conversation I’d have with my girlfriends,” Lee said. “What we’re looking for in terms of tonality is something supportive, authentic. There’s an honesty to them. The other thing that came through in testing a lot, and that we had not had in the Journal before, is that people said that this stuff was fun and funny.”

At least one observer has questioned how this new strategy will affect the quality of the Journal’s content. Lee argued that the reader-generated stories are far from amateurish.

“I’m reading stories that would stand up to any professional writer. Some people have a way of expressing themselves that is very true and clean and unsullied by magazine-speak,” she said. “We’re getting fresh, clear voices that don’t fall into the trap of thinking that they have to write a certain way for a women’s magazine … One of the wonderful things about working with so-called amateur writers is they don’t have preconceived notions about what the magazine should be.”

While these new voices are intriguing, Lee said that the reader-contributors will need some editorial assistance. Stories will be polished with help from the Journal’s editors.

“Of those 3,000 stories that we’ve gotten [in the essay contest], probably two or three could make it into the magazine as it is. Others will have to be edited and nurtured,” Lee said. “We can put writers with them to help them tell that story … There is obviously going to be a greater editorial role. Editors have to be really sharp to bring these stories out.”

Working with reader-submitted stories won’t be the only change to Journal editors’ workflow. The magazine also plans to identify bloggers and blog material to feature in the print magazine.

“We’ve found some incredible material on blogs that we think really needs to be shared with a mainstream audience,” Lee said. “We can have semi-famous bloggers in the magazine that the media cognoscenti will know about, but the ordinary American woman in the Midwest won’t.”

“We have a lot of food edit, and we found out in our studies that people wanted to know the stories behind recipes,” she explained. “We created a new column called ‘The Story Behind the Recipe,’ and a lot of bloggers have great stories … [It] adds a dimension to have a story that makes you even more compelled to read that recipe. There’s a heart and soul attached.”

Blog material, however, will definitely require polish before it sees print, Lee said. She described Meredith research in which test readers were given sample magazines with writing culled directly from blogs. The writing was copy edited but still used what Lee calls the “very immediate” style of blogging. The test readers were not impressed. They demanded “more polish” from magazine content.

“There’s an expectation from this brand, and from print versus online, that there has to be a degree of polish,” Lee said. The Journal had a decision to make. “How authentic were we going to be? What was the language we were going to use? Language used in blogs is very different from what’s used in formal writing,” she said.

Because the test readers included both regular and potential Journal readers, Lee believes that many of these audience expectations were based upon the print format itself. Readers might accept a casual style or lax editing online, but when they purchase a magazine, they feel differently.

“That’s where the curation of the stories comes in. Every story in that issue has to sing. It’s not like I’m drifting through Facebook, and some of that stuff is great, some of it’s not great, but it’s forgiven,” Lee said. “With a magazine, it’s coming into their home. It’s a certain number of pages. There’s no sense of forgiveness. You really have to be on your game, because they pay for it.”

Creating the right blend of reader- and expert-generated content for an established magazine is certainly a new game. The success of Ladies’ Home Journal’s experiment will likely set the ground rules for other magazines to follow.