2012: Why the Web Is Not Dead and Other Flashpoints 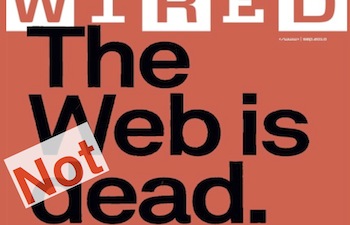 Wired magazine predicted the end of the web in a cover story, but columnist Dorian Benkoil predicts a resurgence this year.

First the easy predictions for the new year: In 2012 we’ll see a rise of politics in the digisphere, along with reporting as if the phenomenon is a surprise; more strum over the Murdochs’ drum; and a snazzy new iPad 3.

But, there are bigger rumblings afoot in the year ahead, too. Here’s my second annual round of predictions for the digital world.

The Return of the Web

Far from the web being dead, we’re going to see more and more media organizations figure out how to use it well.

Publishers have started to realize that putting their stock in proprietary apps for Apple devices reaches only a subset of the potential universe, making it hard to “monetize” the investment, not to mention support an entire operation.

Costly to develop, the apps also give Apple more control of customers and their data than the publishers like. To make it worse, attempts to make money through Apple’s iAds have been lackluster.

Publishers have started to understand, too, that the latest web applications can, via a browser, handle a lot of the latest whiz-bang interactivity and nifty tools. HTML5, the latest web coding language, can help take advantage of tablet and browser functions such as location, swiping, screen size, portrait and landscape orientation, shaking, tilting and more.

The newer web applications are getting better at integrating with payment systems, preventing unauthorized copying, controlling font size, typeface and other aspects that preserve the look and feel of “the brand.”

By using the web, publishers can more easily create something that works across screens, offers similar functionality to a native app built specially for Apple or Android, and gives them access to data and control of revenue.

It also means a lot of the same stuff that hooks into a plain old website (POW?) — web analytics, certain types of javascript and more — can be used without having to do a lot of difficult recoding and workarounds.

Look, for example, at the Google Chrome web store (you may need the Chrome browser) to see just a few web-based apps, including NPR’s for news and Sports Illustrated’s for photos — some of which require a fee.

The Kindle Cloud Reader, the Financial Times and WalMart’s Vudu all went the web route, eschewing native iPad/Phone/Pod apps in favor of the browser to get consumers to buy and consume books, news and video, respectively.

The experience on a computer, tablet or phone can be quite similar to the one on a native app. App companies, too, are gearing up for more web-based functionality.

Flipboard, the iPad app Steve Jobs called a favorite, hired HTML5 expert Filipe Fortes away from Treesaver (a former client of my company). Apple, too, has been listing multiple jobs for those skilled in HTML5.

I’m not saying that native apps will go away — just that we’ll see more development of snazzy new media via the web, which itself is entering a more structured, app-like phase. (See last year’s predictions for a discussion of Open vs. Closed philosophies.)

A Year of Legal Wrangling, Wheeling and Dealing

This year, we’ll see deals done and court cases launched in which holders of various patents, especially in mobile, either sue each other or reach agreement to allow cross-usage. Apple will continue to pursue Google via phone makers over Android.

We’ll see legislative and regulatory pushes on privacy and piracy, egged on by powerful lobbyists. (See Mark Glaser’s previous piece for a rundown.)

I don’t believe that any law will keep people from getting the media they want, though. People will find a way around it, without paying if need be.

In my media management class, we recently drew a representation of Amazon as a multi-faceted behemoth, and it dawned on me how formidable the company is as a media distributor.

Not only has Amazon created a proprietary portable platform in the Kindle Fire, but Amazon Prime now includes music, video and borrowed e-books, along with free shipping, all for the same $79 yearly fee.

Amazon is also a content producer through its IMDb movie and TV site and its new book publishing imprint. In the past, it has produced at least one movie and a show hosted by Bill Maher.

Its financial position makes it stronger than many others. For Amazon, advertising is supplementary revenue, unlike for most media companies, like Google or Facebook. It makes its real money through e-commerce, web hosting and as a Content Distribution Network (CDN) that even competitors such as Netflix use.

Is there any company with big ambitions that Google doesn’t compete with in some way? From Google Offers in coupons, to Places in location, to Google+, to its suite of document and email products, Google Reader, iGoogle, Google Voice, Analytics and on and on, the company is spread through nearly every digital media and interactive sphere.

Like many a media company, Google makes most of its money from ads, on search and through YouTube. Google’s share dwarfs all others in digital, and will continue to generate serious cash flow in 2012.

Meanwhile, it’s chipping away at Apple’s perceived dominance in smartphones with its Android operating system, which is on more smartphones than any other. Its mobile ad company, AdMob, is getting accolades and market share.

The Kindle Fire, based on a “branched” version of Android, is the first tablet to come close to denting the iPad’s market share.

Facebook founder Mark Zuckerberg says everything — search, media, commerce — is better when your friends help you find, evaluate and understand it.

He and COO Sheryl Sandberg told broadcast journalist Charlie Rose in November that Facebook cooperates rather than competes with the rest of the digital universe.

That is, unless you notice that the social network competes head-on with Google for ad dollars in targeted cost-per-click advertising.

Facebook has also beefed up search, is gathering tons of data via the “like” and Facebook Connect APIs, and is grabbing some of the best Silicon Valley talent that used to work at Google, including Sandberg. It has incorporated some of Google+‘s favorite features.

You could build the case for cooperation by noting that Facebook now works well on Android and iOS apps. Amazon includes Facebook’s “like” button on its pages, and allows sending of gift cards through Facebook Connect.

Mainly, though, Facebook competes for attention, often called the currency of the digital age. Every hour someone spends socially networking or consuming media through its pages is time they don’t spend on YouTube, Amazon, Kindle or iTunes.

Apple is, well, Apple — one of the great brands of all time. Though we’ll see a little bit of concern over Jobs’ absence — maybe a little stumble or two — the company should continue to rack up oohs, ahhs, and sales as it turns out new devices.

Even if its focus slips a tad, the company can use its billions of dollars of cash to try just about anything, and even fail a few times.

No one tops Apple’s ability to charge for digital content via iTunes and Apps, and content distributors will have to play along even as they beef up their web app offerings.

If the rumored Apple television comes to pass, we’ll see more frisson in the media sphere, and more pull from Apple against Amazon’s efforts to wrest away sales of music and video — a battle that’s continued for years.

Relative to the big four, traditional media companies are playing on the weaker side of an uneven field. They are masters of content production, but that content is expensive and doesn’t scale and acquire new customers as cheaply as an engineer’s algorithm can.

A few other trends merit some mention. There will be continued froth among ad networks and exchanges, and those buying and selling data around them, with consolidation and some shakeouts.

I see a continued push and pull among human- vs. machine-driven solutions. As Facebook tweaks its Edge Rank algorithm, companies like Demand Media will try to regain ground in search results and companies like Trada will introduce humans to the ad-optimization equation. (I hope to write more about this human-vs.-machine issue at a later date.)

At least one of the big six book publishers may have to fold or merge at some point, though that may not happen just yet. It’s a truism that in the digital age, middlemen with decreased marketing, distribution and production muscle get squeezed. Amazon, Google Books and iBooks are helping apply the pincers.

There’s likely to be activity in the hyperlocal space. Local news services such as Patch and many more localized efforts such as New York’s DNAInfo will need to show investors they’re gaining ground.

Location-based services like Foursquare, Gowalla (now owned by Facebook), and Google Places will increasingly hook into and compete with the hyperlocals. “Location-based marketing” is already a buzz word.

Where Does This Leave You?

Like last year, I’ll say this to media operators: Don’t bet on just one horse. Pay attention to who has access to and shares the data you help generate. Offer your media on as many popular platforms as is feasible, and make some level of it easy to share.

Make sure your business model accounts for sharing of your content, including sharing you may not appreciate. No regulation will protect your content completely.

If you’re a consumer, don’t expect Apple or Android to do everything you need or want, but you may want to weave your media tech life around one or the other for simplicity’s sake. Do expect to be delighted and infuriated as you upgrade your computer only to discover some of your favorite old stuff doesn’t work as well. (And by old, I mean from like two years ago.)

Me, I’ll play with my new Android phone, my new MacBook Pro, consider the new iPad and any new Kindle, keep hacking my Windows computers, getting media any way I can (I still use a VCR sometimes!), and learning with great enjoyment.