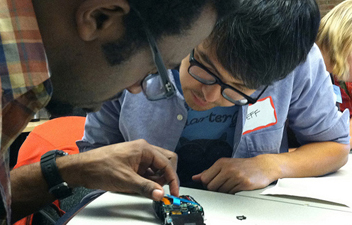 With a little help from Public Lab's Jeff Warren, Stephen Debique, a student from Trinidad, modifies a $49 camera to take pictures in infrared.

This article was co-authored by Jeffrey Warren and Sara Wylie.

A growing group of researchers at Public Laboratory for Open Technology and Science are working to make that happen. Public Laboratory is a community of makers, social scientists, technologists, biologists, cartographers and activists that are working to develop accessible tools so communities can generate data about local environmental and civic issues. Through our evolving civic science and media toolkit, the Public Laboratory community is re-imagining ways in which people can engage with social and environmental issues — not only by collecting new information, but also through the analysis, interpretation, presentation and publication of data. Our tools — from balloon mapping to infrared photography — enable a broader public to question, investigate environmental issues, and act upon the new information they produce.

Public Laboratory’s Toolkit began with a unique balloon photography technique we call Grassroots Mapping. Using Grassroots Mapping, for under $100, non-specialists can make digital aerial maps that can have higher resolution than those available from actual satellites. The Grassroots Mapping community satellite is a helium-filled weather balloon with a low-cost digital camera attached. In 2010, one of Public Lab’s founders, Jeff Warren, developed free and open-source software — Mapmill and MapKnitter — that allows Grassroots Mappers to take the photos from their digital camera and “stitch” them into a map.

Why would a community wish to generate aerial imagery at a low cost? The utility of Grassroots Mapping was first illustrated on a large scale during the 2010 BP oil spill. The media blackout around the spill severely limited journalists’ ability to report on or photograph it, and restrictions on access to coastlines and impacted areas prevented local volunteer engagement with the cleanup.

Recognizing the value of Grassroots Mapping for documenting the impacts of the spill, Public Lab co-founder Shannon Dosemagen and others organized a volunteer community of fishermen and locals who used Grassroots Mapping to photograph ecologically and socially important shorelines before and after the oil hit, creating a public record of the event in which communities rather than news media or scientists create and own the data. This project brought together Public Laboratory’s initial open research community, which now focuses on the development of low-cost open-source hardware and software for civic science.

What is Civic Science?

Rensselaer Polytechnic Institute’s Kim and Mike Fortun used the term “civic science” to describe science “that questions the state of things, rather than a science that simply serves the state.” Too often in science, and particularly in environmental health science, researchers have distanced themselves from the researched.

Public Laboratory community researchers prefer approaches that enable non-specialists to get involved in — and even direct — the questioning of “the state of things.” Though the push for greater transparency in the government is laudable, much of government and industry data is produced through regulatory compliance, resulting in a bunch of papers that don’t address community-identified problems. Public Laboratory challenges such data through inexpensive and accessible tools adapted from well-established scientific methods — helping information consumers become information producers.

Though it may be tempting to think of this effort as “feel good” or out of touch with the realities of everyday life, environmental problems affect all of us  — and often disproportionally affect under-resourced communities. Almost nobody has the requisite expertise to assess local air, water, or soil pollution on their own, or has access to the expensive equipment such analysis requires. And while families worry about the effects of such contamination on their well-being and their children, the primary means to learn about these issues is through dense EPA reports or environmental assessments — if they even exist.

Sadly, science as it’s taught in schools and practiced in universities doesn’t attempt to engage in a substantive and immediate way with local environmental problems and the challenges of making them legible to those who need the information most. In that respect, the “Feral Robotic Dogs” project by Natalie Jeremijenko has been an inspiration to Public Lab.

Jeremijenko and her students equipped toy robotic dogs with toxin sensors in their noses, and held public events to “sniff out” sources of pollution. The project offered an engaging alternative to the kind of bureaucratic opacity most concerned residents are faced with in investigating local pollution.

Although both Jeremijenko and Public Laboratory make use of sensing technology, these projects are primarily re-imaginings of systems of information flow. By asking who gathered this data and who gets to interpret it, both emphasize the kind of critical questioning that’s the hallmark of investigative journalism.

The emergence of affordable digital cameras, smartphones and networked computing offers new possibilities for how we consume and generate information. Public Laboratory’s community is researching and developing these possibilities to create a range of affordable scientific tools.

One example of such tools is an affordable near-infrared camera produced by hacking $60 consumer digital cameras. Camera sensors actually register infrared light which is invisible to humans, but most cameras filter that information out of our digital pictures. Removing that filter can transform a basic digital camera into a camera useful for “multispectral” photography — a technology central to the science of remote sensing. (For example, it’s used by NASA satellites for analyzing the composition of faraway planets and stars.) More terrestrially, it’s used by industrial agriculture to monitor plant health and rates of photosynthesis.

What could this technology be used for in the hands of everyday citizens? Public Lab researchers have begun to investigate these possibilities over the past year.

Last month, to further improve these infrared techniques, Public Laboratory held a research skill-sharing session (dubbed a “barnraising”) that brought together scientists, small-scale farmers, wetland restoration specialists, tech geeks and interested residents of Asheville, N.C., concerned about the health of their river system. The goal was to not only improve near-infrared photography techniques, but to explore potential uses for this technology in wetlands restoration, brownfield remediation, and small-scale farming.

Also in Public Laboratory’s pipeline is a low-cost spectrometer — a speculative but promising project which may amplify the ability of communities to identify pollutants in their environments. Visible-infrared spectrometry is the study of how light is absorbed or reflected by different materials to generate unique color spectra, and is a commonplace technique in many laboratories for identifying chemicals. Using pieces of DVDs, inexpensive webcams and interpretive software, Public Laboratory community researchers are developing a low-cost version of this tool. We imagine eventually using it to identify oil contamination in soil and water samples, monitoring smokestacks, or diagnosing crop diseases.

Changing the Face of Expertise

To empower communities with such low-cost technologies takes careful and long-term research. And to tackle these sorts of technical problems, Public Laboratory’s community of researchers have sought to imitate the successes of open-source software projects by brainstorming, prototyping, refining, and above all, sharing tool designs both online and offline.

Public Laboratory’s largely volunteer network of researchers is creating an open-source toolkit that’s composed of not only physical tools for monitoring, but online analysis tools, a wiki platform for participatory research and reporting, and an evolving set of of ethical guidelines around the use of new technologies. Each of our tools — an aerial mapping kit, infrared camera, spectrometer — are published online under open-source licenses with a “sharealike” provision, which requires users who build upon the research to license it in turn for public use under the same terms. In this way, our collection of science-based reporting techniques is becoming a growing body of open-source research literature which any member of the public may make use of.

This “distributed research lab” promotes a DIY approach to civic science. Such methodological transparency better equips the public to understand, investigate, contribute to, and challenge the information they are presented with about the environmental issues they face.

Activists at the Gowanus Canal, for instance, are becoming experts in remote sensing and vegetation analysis. And by collaborating and contributing to open research initiatives, they’re becoming proponents of critical community engagement.

In a recent online conversation about spectrometer calibration, the announcement of a good spectral image from the most recent spectrometer in development was met with comments that both critically questioned the tool and offered assistance (i.e., “Have you overlaid commercially done spectrum of a compact fluorescent to see how narrow the bands are?” or “What’s the ‘rawest’ format you have for your spectra and can you send/post one in that form? I’d love to play with it and send back some results if I make any progress.”)

However, online collaboration can only go so far when attempting to investigate real pollution sites. For instance, during the barnraising event, PLOTS community members built their own infrared cameras, tested them at a small farm, developed frameworks for future collaborations, brainstormed ways to leverage new tools and data towards positive outcomes, and published research notes and web links on the Public Laboratory website so that collaborations could continue after the event.

In combining activism with research, it’s not enough to simply report; there has to be a direct impact of the research back into the work that’s happening at a site. Changing science implies changing science journalism. How can journalism support a shift from knowledge consumption to knowledge production? Public Lab is changing scientific knowledge production and reporting by increasing the ability of communities to develop new information about their environments using tools they understand because they built them.

A co-founder of Public Laboratory for Open Technology and Science, Shannon is based in New Orleans as the Director of Community Engagement, Education and Outreach. Shannon has worked with Public Laboratory (formerly Grassroots Mapping) for the last year as the Gulf Coast project lead, organizing volunteers as they collected aerial images of the Gulf Coast. Shannon also works with the Anthropology and Geography Department at Louisiana State University as an Ethnographer and Community Researcher on a study about the social impacts of the spill in coastal Louisiana communities. Shannon has an M.S. in Anthropology, a B.F.A. in Photography and Anthropology and has worked with nonprofits for over 10 years.

Founder of Grassroots Mapping and co-founder of Public Laboratory, Jeffrey Warren makes maps and citizen science tools at p.irateship in Somerville, Mass., and is a research affiliate of MIT’s Center for Future Civic Media. He has founded or co-founded various organizations, including Vestal Design, a multidisciplinary design firm, Cut&Paste Labs, a Lima, Peru-based school for open-source programming, Weardrobe.com, and Paydici Inc. Jeff holds an M.S. from MIT’s Media Lab, and a B.A. in Architecture from Yale University, where he worked with artist/technologist Natalie Jeremijenko, building robotic dogs and geese. He likes to draw.

Sara Wylie, a Public Laboratory co-founder, developed webtools for community monitoring of the oil and gas industry for her doctoral work at MIT in History, Anthropology and Science, Technology and Society. As part of this research, she co-founded and co-directed MIT Center for Future Civic Media’s ExtrAct Project with Chris Csikszentmihalyi. Presently, Sara is Public Laboratory’s director of Toxics and Health Research as well as visiting faculty in Rhode Island School of Design’s (RISD) Digital + Media Department. At RISD, Sara teaches social theory and anthropology of science and technology to artists and designers in order to develop new “in practice” methods for Social Studies of Science.